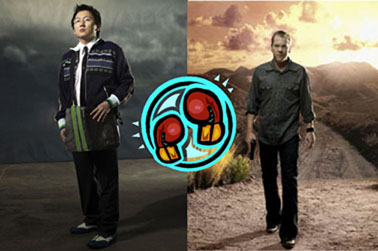 Well, here we are in what might well be our final episode of the Superpower Bauer Hour Showdown until late April. While I plan on continuing to analyze 24 as it continues for the next month, it will be kind of hard to compare it to an on hiatus Hereoes, no? I’ll figure things out as we go along as to how we’ll weather this break in new episodes. However, let’s not get ahead of ourselves; we still have a final showdown which will determine the show that grabs the lead as they head down the home stretch.

Round One: Overall Quality
The big problem with 24 right now is that it seems to be back inside its cozy little bubble of international diplomacy and government organizations. Now, don’t get me wrong, I’m as glad as anyone that we didn’t get any extraneous “Morris the Alcoholic” moments; however, it seems as if we’ve forgotten the civilian perspective on things. I almost miss Sandra Palmer, if only because we at least got to see how this affected someone not officially part of a government body.

This episode had some diplomatic tensions between Russia and the U.S., as well as some Jack Bauer moments in the consulate, but it just felt somehow small scale considering its subject matter. Lennox’s moral stand against the VP is admirable, and the framing of Al-Assad is a natural plot development, but yet everything at the White House seems stale (Here’s hoping that Karen’s return picks things up a little).

This episode certainly sent us into some better territory, however, by involving Subarov and the fact that it appears to open the door for the arrival of some other familiar faces next week. With things being so claustrophobic as of late, we need an expansion of the environment ASAP.

You all know how much I loved last week’s episode of Heroes, which is why it pains me to admit that it’s downgraded itself slightly once again. With the opposite problem of 24, Heroes needs to go into small-scale mode more often. This week’s episode contained the conclusion of advancement of pretty much every one of the show’s character arcs, and yet I felt as if nothing had been resolved. It ended on a huge cliffhanger, and yet I honestly felt no emotional connection to the proceedings.

Peter’s plight at the end of the episode was lifeless to me because Peter has been lifeless to me for weeks; he didn’t encounter Sylar for a reason, he just randomly walked into Mohinder’s apartment. He spent the episode invisible barely emerging from the woodwork to chat with his brother; this was not Peter’s episode. After last week belonged to Mr. Bennet, I couldn’t help but feel a connection to his character; and, to be honest, why should I care about Peter outside of the show’s desire for me to do so?

Peter has to earn that level of connection, in my view, and the writers haven’t given us a good reason to do so. Sure, he has his scar, and his future dealings with Hiro, but why couldn’t this have been a Peter episode? Honestly, if we had had more of his dealings with Claude, more time spent on his personal psyche, and a proper buildup, Peter’s confrontation with Sylar could have been a moment to remember. Instead, it was just a chunk of hair and droplets of blood on the ground.

The episode was fine, with none of the storylines standing out as particularly offensive, but nothing clicked for me. Malcolm McDowell’s arrival as the mysterious Linderman was well-handled, and the reveal of Grandma Petrelli was certainly interesting, but it just seemed like nothing got a chance to seem final, climactic. Say what you will about that island show, but it never tries to accomplish too much in a single episode; Heroes might attack the senses, but it sells the show’s characters short in the end.

Things aren’t too surprising on this front, the real drama will be how 24 performs in Heroes’ multiple-week absence.

Round Three: The Torturous Truth

So, considering that torture has become a bit of a sore point for 24’s producers in recent weeks, let’s take a look at each show’s depiction of torture. It’s Jack Bauer vs. Sylar in the ultimate battle of evil tactics.

It wasn’t one of Jack’s most memorable torture jobs, but he was a bit rushed for time; after all, he wasn’t exactly carrying around anything that could do real damage. The consul wasn’t the most ideal torture victim, as he was winces in pain more than someone with real conviction; the job was almost too easy, in a way.

However, that said, it was still an effective tactic, and he got the information out of him in a satisfactory manner despite the unfortunate blasting open of the door.

Sylar certainly inflicted more damage than Jack did, but he also has the distinct advantage of crazy powers. He was certainly effective, but let’s consider his subjects: Mohinder is pretty much inept at any task you place in front of him, and Peter was unprepared when he walked into the situation.

While he certainly got the better of the battle, his end purpose of eating Peter’s brain might be tough to accomplish with the healing and all, so his actual effectiveness is all dependent on what happens next. 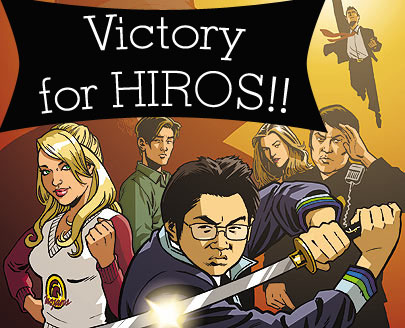 Say what I will about the episode compared to my TV sensibilities, it brought more to the table and took the Ratings crown. The torture race is close: Sylar kind of has an unfair advantage, and we didn’t get to see if he finished the job. Regardless, Heroes takes it to lead 4-3. What will happen come April? Well, you’ll have to wait and find out.