The Top 5 Supporting Characters on NBC’s ‘The Office’

Erin over at Be Something alerted me to this interesting little project at ProBlogger, which appears to be all about revenue streams and becoming a profitable blogger. I’m not so much interested in that idea, as tempting as it is, but I think that the project in question is quite intriguing. I am of the mind that everyone likes a good Top 5 List, and I figure that it’s a great opportunity to expand minds and engage readers from across the globe. And, so, a Top 5 list is born, conveniently in time for tonight’s episode of the best comedy on television.

The Top 5 Supporting Characters on NBC’s ‘The Office’

Disclaimer: A “supporting character” is someone not appearing in the opening credits for the purpose of this Top 5 List. This means no Michael, Dwight, Jim, Pam, or Ryan (Who doesn’t deserve to be there, but that’s another story altogether). 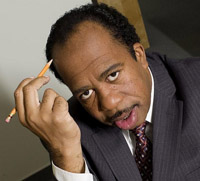 I am placing Stanley on this list because I think he needs to be recognized for his tremendous delivery of what few lines he receives. The man rarely get a storyline, and often just ends up as the brunt of jokes, and yet his gruff and disconnected reaction to everything makes him incredibly fun to watch. So often these characters are relegated to the background, so it’s often an issue of seeing their reaction to events, and Stanley’s are often my favourite.

Favourite Moment: It has to be Pretzel Day. His excitement over Pretzel Day, the fact that he LIVED for it, was just so very random, and so very entertaining. 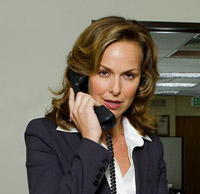 Although she technically has a different credit than the others, I think it is impossible to ignore Jan’s important supporting role in the show’s overall structure. While she provides few laugh-out-loud funny moments when she appears in an episode, she is the most substantial character at providing drama and conflict, and an opportunity for Michael to embarrass himself to a very large degree.

Favourite Moment: I kind of liked Jan more before she became a neurotic mess, so I’ll go with her and Michael’s first kiss at Chili’s as she realizes that he’s actually quite a good salesman after all. 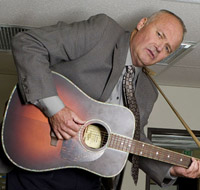 I need to apologize to Kevin here, because I wanted him on this list. However, he and Creed play a similar role: they provide one-liner comments, and never really seem to go outside of that range. And, in the end, I prefer Creed’s downright insanity to Kevin’s mild sexism (It was a close call, big guy, we’ll chat later and smooth things over). Creed is the absolute best example of the effect of the “Talking Heads” within each episode. They never make sense, and yet they always contribute positively to the episode.

Favourite Moment: When he received his fridge during “Casino Night,” and commented that he had never owned one before. The fact that this employee is basically homeless still cracks me up. 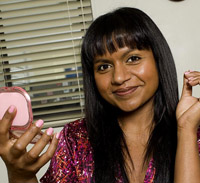 I need to make something very clear: Kelly can be an annoying, annoying character. And yet, that is what makes her fantastic. She is an antagonist to everyone: to “boyfriend” Ryan, to those sitting around her, to Angela, and even to us as an audience. And yet, for some reason, I cannot help but be charmed by Mindy Kaling’s performance every single time. It’s so simple, and so non-invasive to the show’s storylines, that we laugh at her, but also with her, and sometimes even against her.

Favourite Moment: While there are many to choose from, I think that my absolute favourite was her reaction during “Dwight’s Speech” when Dwight invented a story about Brad Pitt being in a car crash. She was absolutely crushed at the thought of it, but then immediately claimed it was karma for what he did to Jennifer Aniston. It’s a perfect insight into her character. 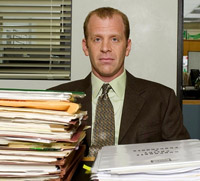 That’s right, Michael, your arch-nemesis is the #1 supporting character on The Office. While Jan provides a certain amount of conflict for the Office antics, it is Toby who ignites much of Michael’s anger thanks to his insistence that they follow basic safety practices and don’t lock people in board rooms. He’s the perfect foil for Michael because he has purely dry delivery, rarely with any inflection, and refuses to play along with Michael’s plans.

And that’s what a supporting character needs to be: someone who can be counted on to play their role in any situation. Toby has also done a really good job of balancing this role with a certain personal charm…which is basically being mildly odd and creepy at times. He’s hit on Pam on numerous occasions (And made me cringe every time), and went to Phyllis’ wedding with a hot woman who caught the bouquet. I think I just like that Toby is a real everyman: divorced, job where he gets hassled every day, a bit depressive, annoyed by Kelly on a regular basis…and yet he remains one of the show’s funnier and more subtle elements. That, for me, makes him the best member of the show’s supporting cast.

Favourite Moment: It has to be “Casino Night”, when he explains to Michael why there will not be Boy Scouts present in order to receive the cheque from the night’s benefit.

Now, I figured I’d go through and highlight some of the various other Top 5s, and I’ve found that many of them indirectly relate to television shows (Including this one!):

First, although it doesn’t have to do with TV, is Five Tips for Mac Switchers over at My Mac Buzz. I’m waiting for Leopard, but I’ll likely end up with a MacBook within a year, so I figure I should get researching.

Second, the Kerala Articles counts down…or up? No, down. They count down their Top 5 TV Shows. I’m a little peeved about The Office only getting an honourable mention, but I can’t complain about their #1.

Third, I need to give a shoutout to Erin for her Top 5 Letters of the Alphabet. Yes, technically, I would have gone with M (I’m a real conceited bastard in some ways), but I think her own top choice is at the very least second best. And, as always, Erin’s neuroticism = awesome.

Fourth, A Room of Mama’s Own runs down why, exactly, people get to her blog when searching porn-related titles. I like this one because it reminded be that someone got to my blog by searching for “Shia Lebeouf dick” the other day, and I found this particularly humorous.

Fifth, I need to link to Brangelina’s post about the Top 5 Brad Pitt headshots over the past week, since it was part of my favourite Kelly moment and I know she’d be interested in seeing them.

Sixth, I must link to Back in Skinny Jeans for their piece on Getting Rid of Your Muffin Top. I didn’t really know what that was, but it gave new context to Jenna’s “Muffin Top” on 30 Rock, which I continue to be kind of addicted to. Yes, Jenna, your muffin top IS all that.

Filed under NBC, Television, The Office