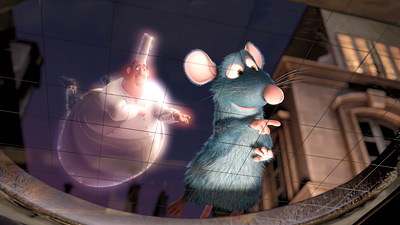 [I said just yesterday that I felt incapable of writing a full review of the film, and would instead focus on various elements of it over the next two weeks. And while these are unlikely to be wordy (Some will be quite short indeed), I’ve decided that I need to try to learn how to write a review. And thus comes this exercise, against my own expectation.]

The Incredibles is one of my favourite films that Pixar has released…but I don’t know if you can classify it as a Pixar film. It is a wildly engaging superhero romp with a unique sense of character and family that doesn’t quite fit in with the comparatively simple tales of fish and toys and monsters within the studio’s other films. The personal style of writer/director Brad Bird is an extension of the Pixar brand: the same genius storytelling, but with a very different sense of style. Ratatouille, then, is an interesting monster: while the film was written and directed by Bird, it was initially conceived and developed under (now former) Pixar short director Jan Pinkava.

The result, like any good dish, is two ingredients coming together in an amazing fashion. The world and characters that Pinkava imagined are closer to what we expect from Pixar, but Bird infuses them with a sense of classic Disney comedy and his own brand of character-based storytelling to create something entirely new. The result is, in my view, the perfect combination of these two elements. Bird takes the usual Pixar formula, dusts it off, and turns in an astounding piece of filmmaking. By taking the most fantastic elements of ‘The Incredibles’ and bringing them to a more traditional story, Bird has created a combination that is hard to beat, and a film that is perhaps the studio’s most conceptually and artistically strong since Toy Story.

SPOILER WARNING: They will be light spoilers only, but there may be some spoilers involved. You’ve been warned.

The story is one of Remy, a rat whose keen sense of taste and smell demand something with a little more variety than your average rat. Inspired by a recently departed French chef named Gusteau who says that “Anyone can Cook!”, Remy finds himself underneath Paris with the world’s greatest restaurants around him. What he finds, however, is a young garbage boy. Linguini is, like Remy, down on his luck and looking for a new lease on life. Through various events, the two find themselves together trying to prove that everyone can, indeed, cook or be something positive for the world. In the process, they have to win over harsh food critic Anton Ego, and avoid the watchful eye of sous chef Skinner.

The film is set apart from similar Pixar stories by the amazing setting. With warm, inviting colours during the day and the combination of bright lights and foggy skies at night, Paris is certainly one of the film’s many co-stars. It is the most complete universe, society that Pixar has created or recreated yet. I always felt in the other films, such as The Incredibles, that outside of the family at the story’s core there wasn’t much of the outside world portrayed. The city was dull, dreary even, during the film’s conclusion. Here, Bird and the team of Pixar animators have created a lively Paris full of life and lustre that is unlike any setting we’ve seen in the past.

And yet, at the same time, the film is also set apart by its physical comedy, something Pixar has not done to this level. Even as some kids felt left out by the dialogue (Some of it is in heavily accented French, after all), the physical comedy reminiscent of Goofy or other Disney cartoons from an earlier era kept them more than entertained. Despite being a film set in a less “zany” universe, the laughs kept coming at a steady speed and seemed to engage both adults and kids at various different times.

It is a universe that you never get pulled out of, even as you laugh at its jokes. There are no pop culture references to be found, unless you count the occasional food reference (I don’t). The voice actors are nearly indistinguishable (I didn’t even pick up on Pixar favourite John Ratzenberger’s role, or that Will Arnett was voicing a character), and all seem perfect for their roles (Especially Patton Oswalt, voicing Remy). While so many animated films remind you you’re watching a film (If that makes sense), this one never tips its hand in the same fashion. They act and react like real people in real situations.

And that’s the rub, really: Brad Bird, to a greater level than most Pixar films, creates real people (or rats) and places them in real situations. This story is downright pedestrian as compared to other animated films, but pedestrian isn’t always a bad thing. With stunning animation, a gorgeous setting and engaging characters, Bird creates a universe in which people can easily lose themselves, and watching along you feel like you’re part of something. In the Linguini portion of the storyline, Pixar’s standard heartwarming storylines are applied to humans in the most successful formula yet.

The film’s only real problem is its need to balance its plot with its other elements, something that Bird does an admirable job with. While large stretches of plot and action define the beginning and end of the film, providing little need for much else, the middle section required a hook. The physical comedy provides that hook, and while it still drags slightly I believe that it is engaging and different enough from its other parts to overcome that fact. Second acts are always the toughest, and I think Bird has designed one that while slowing down the plot keeps the action and the laughs coming. However, to be clear: Pixar, and Bird, still don’t know how to handle romance, as a relationship central to the plot moves ludicrously fast.

But this is a fast-paced film. Somehow, even in the laidback glamour of Paris, everything speeds along (Even during long dialogue stretches that pop up from time to time). A lot of this has to do with the amazing animation (Which is, as usual, stunning), but I attribute most of it to Michael Giacchino’s fascinating score. It echoes Remy’s footsteps, it plays with its French culture, and it ramps up considerably when action takes over. It makes the film jaunt along as a breakneck speed when it ramps up, but slows down when it is necessary; I believe it to be the strongest score yet featured in a Pixar film.

The Incredibles had many of these qualities, but it was something that was totally different. When I left the theatre after The Incredibles (And crammed myself into a backseat with three other people in St. John’s, Newfoundland), I didn’t know what to think because the film had broken some of the Pixar traditions, and I had kind of liked those. In retrospect, of course, it made for a far better superhero film, but it’s really the best of both worlds when Bird works within a more traditional Pixar environment.

Still coming to the table with his own sense of human interaction and pacing, Bird creates the kind of film I wish that Cars could have been, or the type of film that A Bug’s Life wanted to be. Ratatouille is the best example of a filmmaker engrossing themselves in their story, their world since Toy Story itself, and with the advances in technology it is all the more spectacular.

The titular dish is a simple one, a vegetable stew type of dish designed to appeal to our fond memories of home and family. Ratatouille, the film, is much the same; it reminds us of the Disney classics, of Pixar’s legacy, while in a new and exciting package provided by Bird’s filmmaking. The result is perhaps the finest Pixar film yet.