For Your Consideration: Lead Actresses – Lauren Graham and Felicity Huffman

[In Week Four of Cultural Learnings’ 59th Annual Emmy Awards Nominations Preview, we’re looking at possible contenders for the Lead Actress awards in both drama and comedy. Today, we present our first set of candidates. For complete listings for the Supporting and Lead Actor candidates from the past four weeks, check out our For Your Consideration index] 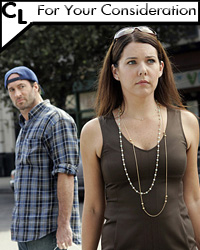 Lead Actress in a Drama Series

There is little question that Lauren Graham is perhaps the individual most snubbed by the Emmys over the past decade. In an awards show dominated by the big four networks, and one where even cable champions like HBO have struggled to win the big trophies, there was little place for a lowly network like The WB. As a result, the deft handling of rapid fire dialogue and fabulous mother/daughter interaction being delivered by the Gilmore Girls star was basically left unnoticed. Not even last year’s rule changes allowed Graham a chance to sneak into the Lead Actress in a Comedy Series category. And, well, chances are that this year she won’t make it either, being on a different network and in a different category. However, nonetheless, I cannot possibly ignore her performance. I shall stand on the side of optimism every year when it comes to Lauren Graham. Even next year, when the show is off the air? I’ll still sing her praises. Because her lack of recognition is one of the Academy’s biggest mistakes, and it is with no hesitation that I consider her worthy of an Emmy nomination.

This season has been a dramatic one for Graham, so it is perhaps fitting that she is submitting in drama this year (The show has submitted in comedy for the past number of years). After sleeping with Christopher, she basically screwed up what she had going for herself with Luke, and spiraled a tiny bit out of control in the process. She married Christopher and found herself swept up in wedding parties, family dinners, and realizing that Christopher doesn’t actually fit into her life. And that her life was about her daughter, about her family, about her friends in Stars Hollow. After being mired in a bit of a funk (Which coincided with new showrunner David S. Rosenthal finding his legs with the show’s dialogue), Graham hit her stride in the second half of the season. After breaking things off with Christopher and finding her feet again, her character’s journey of self-reflection brought her back to her daughter and to Luke…but not easily.

And that’s the thing: much like the show’s dialogue, Lorelai’s life was never simple. Financially, well, things were fine; but her complicated relationship with everyone around her was something very different. Graham always managed to balance the comedy and the drama in a way that always portrayed Lorelai as someone who could at any moment spin out of control. That balanced, intricate performance has been, is, and will be deserving of Emmy Awards consideration.

Now, I am of two minds with this selection: on the one hand, I did not like this episode all that much. It was actually kind of borderline annoying, and did not feature many of the elements that I enjoy most about the show.

However, on the other hand, it is that final moment where Lorelai realizes that her marriage with Christopher is never going to work. As she has to balance holding a memorial for Michel’s deceased dog Chin-Chin, Lorelai slowly comes to terms with her reality, and the hard decision she has to make. When she ends her marriage at the end of the episode, it is an emotional moment no matter whether you’ve watched the season or not. I think she’s better in the finale, to be honest, but it’s much more of a fan-friendly as opposed to voter-friendly episode.

And this final scene is, perhaps, one of her strongest of the season. And it will likely give her one last shot at her nomination. 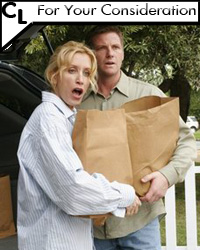 Lead Actress in a Comedy Series

While someone like Lauren Graham might be fighting for her spot, Felicity Huffman is in pretty good shape thanks to a number of factors outside of her own control. However, no matter what people may say about Desperate Housewives’ drop in quality, I honestly believe that Felicity Huffman has never stopped being an absolutely fabulous actress in the process. While her character may, at times, be infuriating, I think that Huffman always captures those problems without trying to cover them up. When Lynette says or does something insensitive, Huffman does it as well without making it over the top or trying to hides its true meaning. She is a flawed character, and yet Huffman allows that to happen in a way that always feels right. Over the span of a season I pretty well want to strangle Lynette, but within individual episodes it is hard not to sympathize with her. With Marcia Cross not around much this season, and with Teri Hatcher as annoying as ever, I think that this is Felicity Huffman’s year to be considered for an Emmy nomination.

Admittedly, I didn’t see the entire season of Desperate Housewives this year. However, I saw enough to know that Lynette had to deal with her husband opening a pizza place, and then she had an almost affair with their new cook, and she had to deal with more crazy kid antics, and…well, she did what Lynette does every season. After last year’s humorless and unappealing decision to put Lynette into the workplace full time, it was nice to have her back more comfortably within her element. A stuffy office did nothing for the show, and a pizza place seems a better fit overall (As ridiculous as it also is). However, the storyline that brought out the best in Huffman, without being staunchly mean or defensive, was her reaction to Nora. Tom’s insufferable one night stand resulting in a daughter, Nora was the epitome of everything terrible in the world. Huffman’s hilarious and understandable reaction to her brought strong comic and dramatic material, and is likely to assist her in her quest for an Emmy.

I segueway quickly there because the end of the Nora arc brought on what is perhaps Huffman’s best performance of the season, and is her official submission. She and Nora argue in the supermarket until Carolyn (Played by the fantastic Laurie Metcalf, who is likely to get her 2nd straight Comedy Guest Actress nomination) decides to hold up the supermarket to get at her husband. As a result, Lynette and Nora have to sort out their problems within a hostage situation, and for Lynette things finally come to a head.

And then Nora gets shot. It was a gut-wrenching moment, as even though 90% of the audience hated her it seemed almost too cruel to have her be killed. Huffman’s subsequent reaction is just a brilliant piece of acting. It is, of course, not all that comic, but that hasn’t stopped her before and it won’t stop her this time around. This is a fantastic episode, and hers is a fantastic performance.

2 responses to “For Your Consideration: Lead Actresses – Lauren Graham and Felicity Huffman”