[As part of Cultural Learnings’ For Your Consideration Emmy Nominations Preview, the next two weeks will feature 7 Drama Series and 7 Comedy Series worthy of Emmy consideration. Check back daily for a different series, with drama and comedy alternating positions. For all of Cultural Learnings’ Emmy Coverage featuring Supporting and Lead Acting candidates, check out our For Your Consideration Index.] 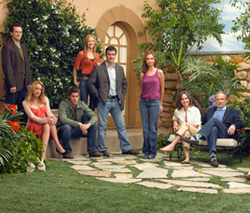 If there was a success story in television this past year, I believe that it would have to be Greg Berlanti. After the unfortunate cancellation of Everwood last year, Berlanti was out of a job. However, there was a show in need of assistance: ABC’s Brothers & Sisters was spiraling out of control with showrunner Marti Noxon and they needed some help. Berlanti was asked to step in, and he took a show headed off the rails and turned it into one of the strongest dramas of the season. Jobless a year ago, Berlanti now has two pilots ordered by ABC and a returning drama series with a plum timeslot.

But let’s face it: he had a fairly good slate to work with here. If I had to pick up the pieces of a show in peril, I would like to have Sally Field sitting there waiting for a script to knock out of the park. And the supporting cast of this series has created a family of people that, although not perfect, have just enough charm to overcome their idiocy. Brothers & Sisters no longer has a shot at being nominated for an Emmy after failing to make the Top 10 shows in a popular vote, but that reality is unfortunate. The series came into its own to become a strong dramatic contender, and it is worthy of Emmy consideration.

On the surface, it’s your standard family drama: patriarch dies, matriarch cries, dirty secrets surface, drama occurs. That’s basically the setup for this drama series, and for the most part it’s about as surprising as it sounds. There are fights between mother and daughters, mother and sons, mother and self, wife and mistress…it’s all there. And I think that this is one of the reasons it hasn’t become a huge success, especially with the hipster crowds: on the surface it’s nothing special.

But there is something else going on with this series, something that makes it impossible to turn away. In dealing with this family’s issues, it has gone through your normal subplots: drug addiction, enlisting in the armed forces, cheating husbands, homosexuality, political differences, child birth complications, etc. You name it, this show has probably done it. But here’s the kicker, the thing that kept me watching: it did all of them well.

While the political stuff was perhaps a bit too heavy-handed before Berlanti stepped on board, after that point nearly every storyline popped off the screen. Dave Annable rocked the war and drug storylines, Matthew Rhys handled Kevin’s homosexuality with just the right touch, Balthazar Getty stepped up for the birth of his twins, and Calista Flockhart kept Kitty from becoming too annoying as the series progressed. And Rachel Griffiths and John-Pyper Ferguson made the husband/wife conflict hard to watch, but in a good way.

After Berlanti stepped in, I started to realize that this cast was one capable of handling anything you threw at it. Whether it was trouble at the family business Ojai, or illegitimate daughters surfacing, I wanted to actually watch this family react. They felt natural, organic, and like an actual family. And I believe that this is almost entirely thanks to the wondrous Sally Field.

As this family’s matriarch, Sally Field makes me ponder what Nora will think about everything. I always want to see Nora’s reaction to her family’s trauma, to her own problems, and to every single issue that could possibly be brought forward. Field has created a matriarch that is protective, vindictive, and occasionally completely hilarious. She is the link that ties this family together, and there is no doubting her acting abilities in this series.

And yet, I love that the show is capably of not always being serious and dramatic and depressing as perhaps some of its episodes display. This family is capable of being serious, but is often at its best when funny things happen. Episodes like “Game Night” featuring Jenna Elfman or the episode where Nora gets high with her friend (A hilarious Margot Kidder) are just downright enjoyable, and give the show’s characters (Okay, mostly Nora) depth that I didn’t see coming.

And that’s the thing about Brothers & Sisters. When I started watching it halfway through the season (I caught up eventually), I thought it was just another family drama. And, in a sense it is…I just kind of like it more than I do others. It is capable of being funny and charming while maintaining such an unstable dramatic core that any single event can trigger a complete meltdown.

The show isn’t perfect, but I can’t help but love how it ended. Rob Lowe’s senator became a part of the show’s cast, problems remained for all of the show’s characters, but yet everyone ended up happy. They didn’t feel the need to send everyone into the deepest pits of despair over the summer break like some other shows (Grey’s, I’m looking at you!), but instead showed the growth as a family that these people had over the past season.

The work that Greg Berlanti did deserved to be recognized, and it’s a pity that people just didn’t think the show was worthy enough. While I’m not exactly outraged at its exclusion, I am disappointed that everyone seems to be just shrugging it off as a high-profile show that just isn’t very good. While not the best show on television, the show came together better than I ever anticipated, and it deserved better. And, even in vain, Brothers & Sisters deserves Emmy consideration.

I don’t really understand this submission for a variety of different reasons. It doesn’t really feature the family at its finest, and its drama is perhaps some of the show’s most overwrought. I actually think that, had it made the Top 10, this episode wouldn’t have done the show any favours.

Nora spends her time in the episode with the incredibly annoying Peter Coyote, while Kitty and McAllister re-enact The Queen. The only compelling drama is the entire “Rebecca kissed Joe” storyline that, while it ended up being handled quite well, wasn’t quite elegant within this particular episode.

It doesn’t really matter, though, since it didn’t make the Top 10. However, if it did, they should have shown Matriarchy, the show’s season finale. Here’s a selection of clips from the episode that was note perfect for the series. The embedded video is good, but the other one (Which I can’t embed) has the ending.