[Regardless of what I think about some of the fall pilots, there are three comedies that each deal with prominent cultural stereotypes to very different degrees. Rather than review them individually (I’d be overly mean to some of them if I did), I figure I’d run them down in relation to their ability to deal with these sensitive cultural issues.] 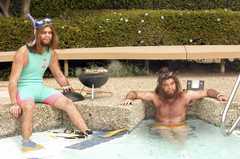 Yes, Cavemen deals with the stereotyping of a non-existent culture, and there is a distinct problem with this: the writers are not capable of forgetting real cultural stereotypes in the process. The entire series basically boils down to stealing every single African-American sitcom joke and just transferring it to these hairy neanderthals. The Cavemen feel out of place at a country club, they feel that their crime is more reporter than white crime, and they worry about interracial marriage.

Cultural Impact: Setting the clock back decades. By presenting a culture of exclusion to a level not seen since the 70s, it’s basically making North America out to be this cultural dead zone incapable of accepting other cultures. And while racism is still a serious issue, ignoring any of the past three decades of advancement is just insulting to the efforts of the civil rights movement. 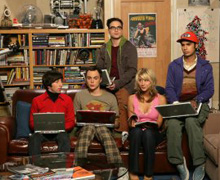 While certainly not attempting to prescribe a moral to the state of geek culture, The Big Bang Theory does attempt to represent it. In the process, however, the geek turns into a complete sitcom stereotype: they play World of Warcraft, they watch Battlestar Galactica (w/ Commentary) and they don’t know how to talk to girls. This, in the mind of sitcom writers, is a geek in a nutshell.

Cultural Impact: We live in an era where ‘Heroes’ is a hit show and where Battlestar Galactica is a smartly written political statement with Sci-Fi elements; geekdom is not just awkward guys who get beat up and lose their pants. The geek has finally risen to a point of cultural relevance, and now Chuck Lorre wants to turn them into a sitcom stereotype all over again. 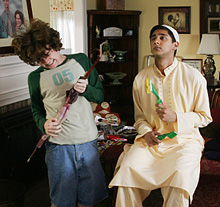 Aliens in America (The CW)

While Aliens in America does feature a Palestinian stereotype (Which never becomes too offensive, and simply remains derivative if anything), the real effect of the series is glimpsing into the American acceptance of both less than hip teenagers and Middle Eastern society. The satire is not all that biting, but it certainly does portray the general level of acceptance as poor, especially in the initial reaction to the arrival of Raja as an exchange student. His new foster mother, especially, reacts harshly.

Cultural Impact: It should be none, since it is the only one of these three shows to actually operate as a proper satire. At the end of the pilot, people learn lessons about other cultures and the theme of the series is gaining acceptance and friendship through better engaging others. It isn’t about laughing at the expense of anyone in particular, but laughing at how silly the situation could theoretically be. But I don’t know if people really “get” satire these days.

For more coverage of these three pilots, stay tuned to Cultural Learnings for a full preview of the 2007 season coming in the next two months.

2 responses to “Pilot Previews: How ‘Cavemen’, ‘The Big Bang Theory’ and ‘Aliens in America’ Confront Stereotypes”