On a Grand Scale: The Similarities between “The Wire” and “The Dark Knight”

As has been noted many times when my guest spots on the /Filmcast (Which, excitingly for Kevin Bacon potential, has Kevin Smith as its guest on Monday night) end before the group gets into discussing the latest new release, I’m not much of a moviegoer. When my own visual media renaissance hit a few years ago, Television was just what I gravitated towards – it happened in such a way that I’m still one of those people who has to pretend I’ve seen various classics I haven’t. Just last night I pulled I “I think I’ve seen parts of X” when, in reality, I’m clueless.

But, like a whole boatload of other people, I headed to the theatres last evening to check out the biggest film of the summer. And like any multi-layered epic film of this nature, I do have a lot of things to say, but I don’t really want to write a review. Cultural Learnings is, at the end of the day, a television blog, and part of my life’s curse is comparing everything I read/watch to some sort of television example.

So, I decided that I’d kill two birds with one stone. I’m halfway through Season Four of The Wire, David Simon and Ed Burns’ HBO masterpiece, and I see a lot of connections between the construction of that series and what Nolan has accomplished with The Dark Knight. I’m not suggesting that the two shows are identical, or that Nolan achieves the effect or quality of The Wire’s five season long story arcs within a single two and a half hour film, but rather that some of the decisions and emphases he makes render this story as much an exercise of scale as Simon’s visionary work.

And both in the world of television crime series and superhero cinema, this type of scale is unprecedented.

[Note: Yes, believe it or not, I am going to try to discuss both of these examples without any major spoilers. This means that, while I’m going to talk about themes and characters in both series, I don’t plan on going into major details on either of them. So, people who have seen both can fill in the blanks, and maybe those who’ve only seen one may be intrigued by the other.]

What sets The Wire apart from other crime shows on television is its emphasis on all impacts of a particular event or scenario. It is not a story of the police fighting against the Baltimore Drug Trade, but a show about the expansive impacts of that trade on the people fighting it, the people trapped inside of it, and the people who are simply innocent bystanders caught up in a game they’re not playing.

Similarly, The Dark Knight isn’t a film about one man’s crusade against crime. It is, instead, about Gotham’s reaction to the rise of crime and, in particular, the introduction of the diabolical terrorism of the Joker. Batman is but one of the many players we see – whether it’s new district attorney Harvey Dent, Lieutenant Gordon, Rachel Dawes, or even the people of Gotham themselves. The Joker’s terrorism impacts all of them, and such a broad viewpoint takes this from being a traditional story of good vs. evil to a whole new level of social inspection.

While some have criticized The Wire for lacking traditional character development, what it allows is for later seasons to go beyond its set of main characters into something deeper and more thematically interesting. Because the expected actions and reactions of various characters were already in place, Simon and Burns were able to use their time in establishing new characters in relation to them. By constantly adding to the universe, you get a very complicated but rewarding structure wherein heroes are not always playing the hero and villains are not always plotting villainy.

For me, that’s what Nolan has crafted with The Dark Knight. With Batman’s character already in place thanks to the fantastic origin story of Batman Begins, the film is able to branch off into further time spent with characters like Harvey Dent, like The Joker, like Gordon without feeling we’re missing part of Batman’s story. This isn’t a story about one character (Although The Joker comes closest) but rather about the ways that all of Gotham reacts. As a result, the story is as much about Dent’s struggle to fight crime with his face showing to the world as it is about Batman’s struggle to do so under a mask. We also, like The Wire, get a glimpse into the character of both sides: while we see the people fighting against criminality, we also see the criminals themselves and their own inner workings. 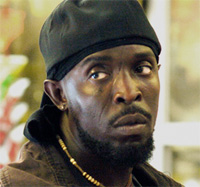 The character of Omar is a fan favourite on The Wire, a shotgun-toting, nursery rhyme whistling thief who steals from the drug kingpins and has his own moral code that doesn’t pay attention to most of the rules we’re aware of. He’s not evil – his code includes not killing civilians, and he honours rules that he respects (Such as a Sunday truce). But to one side of the conflict, the drug fiends, he is an unpredictable monster who everyone fears and who no one should mess with. On the other side of the conflict, with the Police, he is willing to work within the system to help them out knowing that he will benefit from the sheer satisfaction of screwing over everyone else.

This is, in other words, the exact opposite of The Joker. The Joker is independent in many of the same ways, and shares his own moral code that neither side really doesn’t understand or follow. But, he is evil, and he is an unpredictable monster for both sides even though he does help and associate with the criminals to an extent. Both characters share a commonality in that their actions force certain reactions within their respective settings: watching the ways various different characters deal with Omar is one of the best parts of The Wire, and in The Dark Knight watching Heath Ledger’s stunning performance as the Joker force complicated decisions within the police department is just plain thrilling.

One of the central themes of The Wire is the question of corruption, of whether or not the Baltimore Drug Trade’s corruption is capable of spreading so far as to be unstoppable. To steal a line from TDK, actually, it’s about whether or not the battle against drugs is an issue of an unstoppable force facing an immovable object. The battle will keep raging (And rage it does), but no matter the battlefield (Whether on the streets, in the courtroom, or in the school system) no outright winner can be declared, and no side can back down. The Wire is about investigating why that is, and what motivates the people involves to be who they are, to become who they may not have wanted to become, and to end up as part of this game.

And, like the line itself says, The Dark Knight is about when, why, and how the various people end up in the position they’re in. The Joker is, ultimately, the lynchpin moment for these people: with his inclusion, his terrorist actions going far beyond the line of criminal behaviour, forces people like Bruce Wayne and Harvey Dent to consider why they do what they do. Like much of his activity, The Joker is all about social experimentation – the film, however, is not about him as a character but rather how his corruption spreads to the point of compromising the larger battle. While Ledger’s death is a tragedy, the Joker’s arc in this story is largely complete at the end of the Dark Knight – the damage is done the second he arrives, and the rest is about its impact on the rest of Gotham.

In the television crime drama genre, there is no show quite like The Wire. In a genre now completely driven by the procedural dramas that have come to the point of oversaturation, something about The Wire just sticks out like a sore thumb. There are shows that operate in the same vein, and ones that also click in certain areas, but people going in expecting a Law & Order-type series will be in for a surprise, albeit a very pleasant one should they be open to it.

But it’s nothing compared to what The Dark Knight does for the superhero genre. This is a film in which, outside of some technology leaps we normally associate with Batman anyways, reality dominates. There is nothing about The Joker that feels fake, in some way manufactured to create the type of dangerous situation that requires a superhero to swoop in and save the day. It’s a film that trascends the idea of superheroism to the idea of simple heroism, a film with uses comic book mythology to speak to real world issues with a levity beyond anything before it.

And, like The Wire, it’s because every plot point or character development has more than one reason. It’s not an issue of one tragedy resulting in one reaction, but multiple variables combining to create new emotions and new intentions. The villains of the piece (I don’t think I’m spoiling it if I pluralize that) are not two separate entities but rather two connected parts of a larger whole. Their battle is not just with Batman but with something far bigger, whether it’s inner turmoil or simple psychosis (And that’s presuming psychological damage that is never confirmed and, in some cases, contradicted by the Joker’s clarity). While Superhero films are capable of having nuance and complexity, it has never been crafted on this level across both heroes and villains, or both plot and character.

To put it simply, The Wire and The Dark Knight are both extremely engaging, thought-provoking, well-crafted pieces of television and cinema respectively. They feature amazing performances, complex moral structures, dynamic plotting, nontraditional narratives for their genres, fantastic character development, and a sense that what you’re watching transcends its normal categories into being something that can stand up against any other form of media.

And while The Wire never had its chance to set television ratings record and emerge as a blockbuster success as The Dark Knight has (Already with the largest single day of all time from Friday), and it’ll be a pity when both examples are ultimately shut out of their respective major award categories. Just as The Wire was never nominated for the Emmy for Best Drama Series, I don’t feel that The Dark Knight could ever get a Best Picture nomination – this does not change, though, how deserving both would be of such honours. Neither is perfect, and there are plenty of things I could point out about The Dark Knight that might quibble with some of the above, but in terms of scale it’s hard to argue with the impulse and impact of either.

So, this is my opinion – does anyone else have thoughts about The Dark Knight or The Wire that they want to get off their chest? Are they actually similar, or am I just taking two things I like and making them out to be similar so I have an excuse to write about them? If you want to discuss either example, although try to keep spoilers to a minimum if entirely possible, leave the comments below.

Filed under The Dark Knight, The Wire