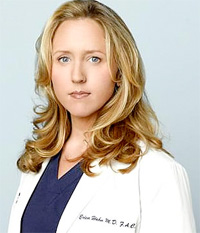 When the news broke over the weekend, it was an odd kind of déjà vu. It was only a year and a half ago that Isaiah Washington was dumped from Grey’s Anatomy for his behaviour on set, in particular in regards to homophobic remarks directed at co-star T.R. Knight, so the event does strike a certain familiarity. However, while scandal may be par for the course for the ABC series, news that Brooke Smith’s character, lesbian Dr. Erica Hahn, has been unceremoniously written out of the show [via EW’s Michael Ausiello] is an issue that is not about the performer’s conduct but rather the context and content of their storyline. The objectionable conduct is not their own actions, but rather the decision by both Shonda Rhimes and ABC to oust this character for reasons that, while not definitively questionable, seem suspicious.

I don’t believe that this is a simple situation, or that this storyline is in itself a creative high point for the drama series: from the beginning, it has felt like a convenient storyline to keep two characters relevant to the melodrama that permeates the series rather than a consistent character development (especially for Sara Ramirez’s Callie). But the decision to end the storyline feels the exact opposite of “organic,” which is ABC’s official line: while eventually Smith’s exit from the show could have felt like a natural event, instead reports about it being linked to a broader concern of the trajectory of the show’s investigation into homosexuality feel almost frighteningly familiar, and scarily believable.

So when Smith makes her exit from Grey’s Anatomy tonight, and we say goodbye to Erica Hahn as a regular character, all attention shifts to a network and a showrunner who, honestly, should know better.
Now, first and foremost, Shonda Rhimes is denying that the question of sexuality has anything to do with it: she’s claiming, as one would expect, that they felt the storyline had reached its end point and that the character didn’t have anywhere to go once they reached the climax (excuse the pun) of her relationship with Callie.

And, in some situations, I would totally agree with the idea of ending storylines when they grow stagnant: there are some characters who, even when added to a main cast, eventually need to leave for the show to keep going at a normal pace. Rose, Derek’s nurse love interest last season, is a perfect example: a character that was part of a major storyline but was, earlier this season, transferred off because she wasn’t relevant to major storylines.

The problem I have with this is that Brooke Smith is not a nameless actress, and Dr. Erica Hahn is not the same as Rose. As a major cardiac surgeon, and as a great foil for the show’s other characters, there was something much more to this woman than her sexuality. In last week’s episode, Smith has a fantastic Emmy submission not only because of her highly emotional scene where she confronts her sexuality head-on (YouTube), but also because of her good work bouncing off of Chandra Wilson as part of her complicated tumour removal.

Which is why it’s hard to buy ABC’s argument here – yes, the show is bringing in Mary McDonnell (Battlestar Galactica) to play a new surgeon for a guest arc, and the addition of Melissa George as a(n ironically bisexual) new intern, plus there’s rumours of Kevin McKidd (Rome) sticking around as the hospital’s new trauma doc, but Hahn’s dynamic with the cast (in particular with Sandra Oh’s Christina) was large enough that an unceremonial exit feels more false than I could imagine. And considering how great she was in last week’s episode, and that she had palpable chemistry with almost the entire cast, the only reason one can think of getting rid of her character is related to her budding relationship with Callie.

And I don’t think that I need to tell you that’s raising some alarm bells: on a network where Brothers & Sisters has an openly gay lead character, it seems unfathomable that the network would be concerned over a lesbian relationship. However, at the same time, Grey’s Anatomy is a show that reads as more of a flagship drama series than Berlanti’s Sunday drama: is is possible that the network feels the show’s sagging ratings (getting trumped by CSI in key demographics where once it dominated the CBS drama) are a reflection of the show’s fanbase reacting poorly to this same-sex relationship? Either way, one has to wonder to what degree they are judging this storyline based on the content as opposed to the context, reading about it in broad strokes as opposed to seeing how it has developed throughout the episodes. I was skeptical when it began, but it has been well-handled, well-acted, and not the waste of time it felt like it could be when it was shoddily introduced.

And even if they are concerned with how it has been executed, I have two questions. First off, slightly in jest, where were they when Shonda inexplicably tried to make George and Izzie hookup and almost wholly ruined their two characters in the show’s third season? And, more seriously, is this a sign of Shonda Rhimes willing to let the network control her series (she would obviously argue that it isn’t, but I don’t think that Ausiello’s reports of backstage shenanigans are total fabrications)? I know that she has two shows at the network (Private Practice, also struggling in the ratings, airs on Wednesdays), and that she obviously would like to keep her job, but at the same time this is very fishy: transitioning the homosexuality storyline away is not an abnormal showrunning practice, but dumping the hard-working and quality actress in the process goes beyond mere tinkering, and I don’t buy her argument that “we did not find that the magic and chemistry with Brooke’s character would sustain in the long run.”

The question of whether this is the result of some level of homophobia from the network is a tricky one, and one that I don’t think anyone can make a definitive statement on, but does it really matter? ABC didn’t make Brothers & Sisters change Kevin into a straight character, so the network isn’t run by bigots, but this decision is still mighty fishy even if it was over some other type of storyline. Similarly, Shonda Rhimes isn’t ending this storyline because she doesn’t approve of homosexuality, but it is still a concern if she doesn’t have a backbone when it comes to her characters. And at the center of all of this is a hard-working, wonderful actress (who was also great in Weeds’ third season in a short guest arc) who, through no conduct of her own but some great acting, now finds herself without a job.

And that’s the biggest issue here: at the end of the day, after the political dust settles, Brooke Smith will no longer be employed on Grey’s Anatomy, and a very worthwhile character in Dr. Erica Hahn will no longer available to the show’s writers. Whether it was worth this sandstorm of controversy that must seem all too familiar to Shonda Rhimes, well…only time will tell. But something tells me the answer is no.