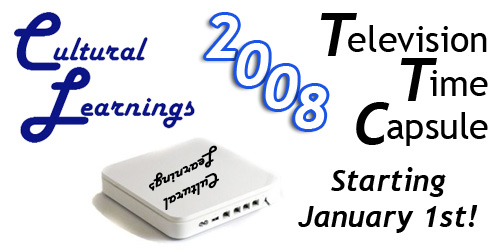 Myles here (I felt like I should introduce myself, but I’m the blog’s only writer, so that seems unnecessary, but this is an unusually personal post and I thought it deserved a more formal introduction…the formality of which was erased by this spiel. Blerg).

First of all, I want to wish everyone a happy holiday season – the past year has seen a large expansion of readers to the blog, and I hope that all of you are surrounded by family, friends, and a couple of high quality television boxsets or a fully stocked DVR this holiday season. After last night’s review of the season finale of Skins, my television viewing schedule is entirely clear: as a result, although I’m sure you’d love to hear my thoughts on the Jess/Dean debate as I unapologetically revisit the third season of Gilmore Girls, Cultural Learnings is officially on hiatus until after the holiday season.

But, I also want to announce how it is I plan on revisiting the past year in television, my first full year as a “critic” of sorts. The Cultural Learnings 2008 Television Time Capsule is a project where I ask myself a question: if I had to pick episodes of the shows which aired during 2008 in order to inform future generations of the year in television, what episodes would they be?

This has already created numerous conundrums. How do I choose which episode of Mad Men’s second season to include? Do I cop out and include the entire box set of The Wire to avoid picking a single episode (“We’re going to need a bigger capsule.”) Do I dare soil the capsule with an episode from the hideously awful third season of Heroes, even if it could serve as a warning for future TV viewers of what not to watch? Will all other shows wilt in comparison to the charm of Pushing Daisies, or will it and The Middleman form some sort of awesome television alliance that will fulfill Darwin’s theory of evolution and muscle out all the other shows by the time the capsule is pulled from the back of my closet?

I have a lot of soul-searching to do this holiday season, and know that the task will not be taken lightly. I also hope, however, that it will not be taken alone: I would absolutely love to know your own thoughts on which series and episodes should be represented in the time capsule. The thing’s imaginary, so space is not an issue, so I’m willing to even expand outside of the shows I watch in order to represent the voice of the people (that’s you!). And seriously, if you can help me pick an episode of Mad Men to include, I would be eternally grateful.

So leave a comment on this post, or send me an email at cultural.learnings at gmail dot com – depending on whether my Christmas spirit is all used up by the time the New Year rolls around (which is quite unlikely), there might even be a chance for a prize draw from those who contribute a suggestion. So, please, let me know what you’d want future generations to take from TV in 2008 – the good, the bad, or the ugly.

In the meantime, though, enjoy your holidays and I look forward to seeing you (and an abnormally busy/awesome Winter season premiere slate) in the New Year!