Late Night Changeover: The Debut of The Tonight Show with Conan O’Brien 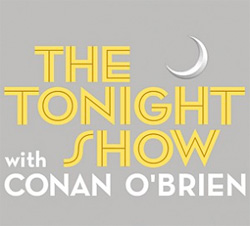 I don’t feel that I’m really qualified to be “reviewing” the first hour of The Tonight Show with Conan O’Brien.

First of all, I don’t actually watch much Late Night television: I’ll check out the odd monologue, or watch the occasional comedy sketch, but for the most part the focus on interviews has become more and more irrelevant in our information overload culture. My generation just doesn’t watch as much late night comedy, and when we do it’s Stewart/Colbert before it’s Leno/Letterman.

Second, if I did watch Late Night television, it wasn’t The Tonight Show with Jay Leno. The show was everything that was wrong with late night: Leno wasn’t actually all that funny, and while he was good at getting the “right” interview for his guests’ promotional needs that isn’t exactly a reason for me to tune in. Considering that I don’t like Leno to begin with, and that he’s ruining NBC’s schedule (that’s all I’ll say on that subject), I can’t really judge this based on whether Conan lives up to Leno’s legacy (which I don’t really respect to begin with, it appears).

And third, I think Conan O’Brien is a hilarious human being, his awkwardness representing a great connecting point for me as a viewer; whether his taste in music, his taste in guests, or more recently his gut-busting comedy he managed during the strike without any writers, Conan has consistently impressed me at every turn. Although certainly not young, Conan has nonetheless been the host who felt most in touch with my generation’s late night needs.

So, really, what am I going to say that I couldn’t tell you before the show airs: I’m going to think Conan is funny, I’m going to think he’s funnier than Letterman, and my lack of nostalgia for Leno’s Tonight Show means I think it’s legacy has actually been more or less saved pop culturally speaking. As a result, it is with all objectivity out the window that I tell you that Conan O’Brien is still Conan O’Brien, the Tonight Show is different than it used to be, and one would hope that this improvement would be reflected in the show’s success.

From my personal experience, Conan O’Brien works best when he is actually amongst the people, which makes this whole Tonight Show gig somewhat problematic. He can’t appear to be too much amongst the people, or his people as they may be, because he risks alienating those who were a fan of Jay Leno, and who may feel that self-deprecation isn’t exactly the kind of figure they want on their televisions. The first episode has the best example of this: while Leno was known for his impressive collection of classic automobiles and motorcycles, which make him appeal to those who like cars, like luxury, or like old things, Conan has an extended video montage about his 1992 Ford Taurus and its power to impregnante women and impress Fabio (with brown hair). People might technically be closer to Conan in real life, owning old cars and dreaming of their power, but they would rather associate with Leno’s brand of idealized populism.

This doesn’t mean that Conan isn’t going to try his darndest to make it in his new gig, although his focus is somewhat strange. Rather than focusing on Leno’s audience, or even on his own audience, he was seemingly obsessed with his move to L.A. It’s an odd move since a majority of his viewers aren’t actually in L.A., and all it really proves to them is that he’s still capable of geographic humour (which, who isn’t? It’s a classic). But everything seems to boil down to L.A.: he steals the D from the Hollywood sign, he talks about his car’s transition, and the entire opening segment (which was really enjoyable) was Conan pulling a Forrest Gump and running from New York to L.A. That geographic transition was more dominant than you’d imagine, even moving into Will Ferrell’s interview where he lists off sarcastic things he should do in the big city.

It’s not that this isn’t funny, but it’s a big cliche: his best L.A. run isn’t really specific to the city, but rather Conan’s particular brand of comedy in a new location. That’s the ultimate proof, here: it’s not whether or not Conan can do L.A. humour, but whether it will adjust some of the more inherent parts of his comedy. The takeover of the Universal Tram Tour was certainly an example of vintage Conan humour: it puts him amongst the people, it allows him to be as ridiculous as you could imagine, and more importantly it demonstrated the two most important things about Conan. Not only is he very good at those kind of remote settings, but his audience is devoted to them. Their chanting of “Circle” coming out of the clip was a sign that his audience is certainly as strong on the west coast as the east, so the location really shouldn’t be a huge deal at this stage.

That segment ended up being the comic highlight: Conan’s monologues are never his particular strongsuit (he throws out a few political jokes, but knows not to spend too much time in that area), and he keeps this one quite short and heavy on self-deprecation. It’s surely a stark contrast to Leno’s format, but that’s just the way Conan is, and I personally would tend to prefer that setup in an era with Stewart/Colbert are just in a better position to handle that sort of humour. This isn’t to say that Will Ferrell and Conan weren’t funny in their interview, but Conan seemed a tiny bit nervous, and more or less just let Ferrell run with it. It was a safe show in that degree, and certainly Pearl Jam wasn’t exactly musically out there, so to speak.

Really, Conan kept the show from being anything close to dramatic the second that, after the first commercial break, he took a short moment to thank Jay Leno personally, quite honestly in fact, although he threw in a little impression and a tiny joke about him being back in just a few months for good measure. It was a classy move, and it was a classy show as a result.

It’s hard to judge the show right now, primarily because Conan is playing with a few elements that we didn’t really get to see in action here. We didn’t get to see any of his signature skits (like The Year 2000 or similar) and perhaps more importantly we still don’t really know what role Andy Richter is going to really play. As it was, he and his distinctive (and at times kind of irritating) laugh were present during the monologue, where he extended a few of Conan’s jokes, but then all but disappeared as the show went on. With so much time spent on the introduction it’s inevitable that certain of the show’s elements will be left untouched until later in the week, but it will take a while longer to see what this “Announcer” role is really going to mean.

But overall, it works: sure, part of you wants the show to spend more time with Max Weinberg and the Tonight Show Band, and part of you wants to see a bit more zaniness, but the few moments of zany were well-placed to prepare Leno viewers for a new era without shoving it down their throat. A solid first outing, and although Ferrell is ready to say goodbye in a sarcastic fashion methinks that he’s safe for at least a while…you know, until Leno fails at 10pm and he’s in search of a new timeslot.

Filed under The Tonight Show

2 responses to “Late Night Changeover: The Debut of The Tonight Show with Conan O’Brien”