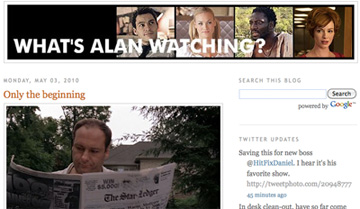 Alan started “What’s Alan Watching?” because he wanted to recapture the immediacy and the interaction of writing about television as it happens, in his case with NYPD Blue. I think that anyone who watches as much TV as I do can relate to that: before I had a blog I posted on Television Without Pity, or NeoGAF (then Gaming-Age), when I had something to say about an episode of television. We all search for those sorts of communities when we have something we want to discuss, but that’s generally considered to be something that fans, rather than critics, engage in.

What Alan did was bring the criticism to the people, democratizing the process of analyzing television as it happens. I don’t think that Alan intended this from the beginning, but the triumph of his work online is that he was able to adapt once he realized the potential within his model. He knew from personal experience how rewarding being part of one of those communities can be, and so he made several key decisions along the way (avoiding spoilers, engaging with commenters, creating decorum rules for comments, etc.) that helped his blogging experiment turn into something fairly remarkable. By marrying his enormously intelligent television criticism with the internet communities that intelligent viewers of television seek out, Alan made television criticism into something more than a one-way suggestion service – I won’t say he’s the first to ever accomplish this feat, but he was certainly the one who most embraced the potential of this change in the age of the internet.

The result is that television criticism no longer seems exclusively the realm of the “professional” (although “professionalism” remains important) – by valuing his reader’s comments perhaps more than the reviews themselves, Alan sent a clear message that criticism is something that anyone can accomplish through intelligent observation. I have to believe that there are many people out there who were (like me) inspired by Alan’s writing and by the community he created, and who have either started a blog, taken a class, or simply posted on a message board in ways which reflects their experience on Alan’s blog. They’re Sepinwall’s Army, the kind of people who rush to the internet to theorize and debate once each episode of Lost is over and the kind of people who embody television’s active audience.

Alan’s move to HitFix isn’t going to change how he writes, and despite some concerns from his readers (who rightly point out some problems with HitFix’s commenting system) I think that Alan’s commitment to his community will be more powerful than any technological barriers and it will continue to thrive in this new environment. However, it has to be said that this represents a pretty substantial shift: once a print journalist blogging in his spare time, Alan is now primarily an online television writer. “What’s Alan Watching” has been transformed from an extension of his job into the job itself, a transformation made possible by the fantastic work Alan has done over the past four and a half years. Alan was the architect of his own future, helping create the circumstances wherein online television criticism became something more than links to daily columns and where he could make this exciting transition.

There is no doubt that what I do here at Cultural Learnings owes a huge debt to Alan’s work: while I started this blog before I started reading “What’s Alan Watching?” I don’t think it became anything substantial until I started following in his footsteps. Alan has been a tremendous source of inspiration and encouragement, both indirectly and directly, over the past few years – his camaraderie has made me feel like a “real” television critic, just as his television criticism made me feel like that was even remotely possible, and I am eternally grateful for it all.

As noted above, this is not some sort of eulogy: I come to praise Sepinwall, not to bury him, as there is still more to come in both the immediate (his reviews of The Wire’s third season, for instance) and distant futures. However, one of the things that Alan’s work has proven is that just writing about television series at the beginning and the end doesn’t quite capture their complexity, so I figure it’s only fitting that we stop at a crossroads in Alan’s journey to recognize just how important “What’s Alan Watching?” has been to television criticism, to television fans, and perhaps even to television in general.

As I’ve often said, it is inconceivable that someone could be reading my work and not reading Alan’s, but if you are one of the few I would compel you to check out “What’s Alan Watching?” at its old and new homes – you won’t regret it.

4 responses to “I Come to Praise Sepinwall, Not to Bury Him: Reflections on “What’s Alan Watching?””