Heart-Shaped Hole: Game of Thrones Season 4 and the Death of Reader Certainty

Season 4 and the Death of Reader Certainty

Here at Cultural Learnings, I’ve been writing Game of Thrones reviews intended to be read by both those who have and haven’t read the books, but they’re unavoidably written from the perspective as someone who has. For the most part, this hasn’t been a big problem, as I’ve never been one to be too concerned with the series deviates from the books.

I remain mostly nonplussed by changes, but they’re tougher to avoid after a fourth season that has shot the books full of holes on numerous occasions. Although the season by and large ended without an outright cliffhanger in “The Children” (which I reviewed in full here), it nonetheless has left book readers in limbo when it comes to at least one major development. It’s an important turning point for the series as an adaptation, and one that will test whether or not those book readers are willing to embrace an environment where the books are no longer a reliable indicator for the story about to unfold, and where their position as arbiters of knowledge is in question.

[Warning: I’m speaking to Book Readers here, so unless you want to risk spoilers for future seasons, stay away if you haven’t read the books.]

This began before the finale: whether in the scenes of the White Walkers setting up the series’ larger mythology, or in the changes to Daario’s storyline, or in the entirely new story for Jon, this has been a season of major deviations from the timeline of the books. In these cases, though, I would argue that the changes felt like practical changes. It makes sense to set up the mythology earlier to give viewers a sense of scale and remind them of the threat north of the Wall, given how much it drives that storyline moving forward. It makes sense to change Daario’s storyline, given that the Dany material is one of the weaker points in the later books and could use more structure that a more complex relationship between Dany and Daario would offer. And they needed Jon’s attack on Craster’s Keep both to establish his prowess as a military leader and to kill time before they would get to the bigger battle at a later point in the season. 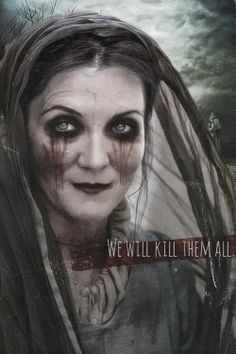 In other words, they were choices that still felt designed to work towards eventual events that happen in the books, or ideas that book readers know are important later. However, the choice to leave out Lady Stoneheart is one of the first choices that feels like a conscious creative choice driven less by practical concerns. Lady Stoneheart would serve the themes of the series. Lady Stoneheart is tied to the Lord of Light, and to the religious themes therein. And Lady Stoneheart is quite literally the dead Catelyn Stark brought back to life to seek vengeance for those who wronged her, a pretty major part of the series’ mythology for many book readers. And many people thought that there would be no better ending to this season than her reveal, given that it serves as A Storm of Swords’ epilogue and seems the very definition of a “WTF” television moment, and given that Lena Headey seemed to tease the reveal on Instagram. And so her absence feels purposeful, as though the writers simply chose not to include her for reasons we could only—and will—speculate to.

Now, to be clear, it’s still possible that Lady Stoneheart could still appear. Brienne is on a completely different story path at this point, so it’s plausible she’ll head out into the world and stumble across Lady Stoneheart next season (who will be extra pissed given that she was in both Sansa and Arya’s presence and let them each slip away). But given how logical it would have been to reveal her at the end of this season, and given how much that choice knowingly creates this speculation (and thus risks spoiling a future appearance for non-readers, and thus taking the surprise off the table), I would wager that the series will be leaving out Lady Stoneheart entirely, having decided she is not crucial to endgame of the series.

Regardless, though, the show has created a cliffhanger for book readers. Lady Stoneheart becomes the symbol for the sanctity of Martin’s novels, the first major omission that lacks a clearcut, practical justification other than “Because the writers chose not to include her.” This finale was full of lots of smaller changes, like the absence of Tysha within Tyrion and Tywin’s final showdown. But given that the lack of internal monologue has meant Tysha has fallen out of memory by this point in the series, and how returning to that character would work against the weight of Shae’s death (which feels more pronounced in the show given the increased role for the character), I can pretty quickly work my way into the logic behind that decision. I understand how others might feel differently, but the change does not rest on the writers’ personal interpretations of the series in the way that Lady Stoneheart’s absence would.

This season has demonstrated the weight of expectation on book readers. I was among those surprised last week’s episode didn’t end where the finale began, with Stannis riding in to take out Mance’s forces. Many readers felt the same, to the point where one emailed a critic who hasn’t read the books to complain about how it didn’t happen, thus spoiling that it did (although it likely wouldn’t register as a huge surprise regardless). One has to imagine that ending the season without Lady Stoneheart will do the same, as book readers flock to comment sections to ask why the series isn’t doing what they expect it to. It’s even a big enough point of conversation that Entertainment Weekly—likely tipped off to her absence—has an extended feature discussing her absence, knowing that it’s going to be one of the main points of conversation and wanting to draw the page views tied to that.

I don’t have an opinion on Lady Stoneheart, one way or the other. I like what it says thematically about how the dead live on, and I would’ve liked to see how they would have imagined her visually, but I can equally see it as one of too many ideas Martin is working with in the fourth and fifth novels, and don’t necessarily feel the show and its characters have nowhere to go without it.

However, I will be happy if Lady Stoneheart doesn’t appear in the series provided that it serves as the stage at which book readers officially let go of any clear expectations of what is about to happen next on the series. This is not to say that book readers must like the choices being made, or that they are not allowed to anticipate what’s about to happen next—rage on, book readers of the world. However, Lady Stoneheart’s absence feels like the biggest moment the show has avoided, and a clear statement that no one who has read the books has a crystal clear understanding of what’s about to happen next. Book readers may have a distinct perspective on the events to follow that has more authority than non-readers, but they are no longer able to speak with certainty about what is to come in the seasons ahead.

I consider this to be a good thing, and hope—perhaps naively—that readers will come to terms with this new reality. I’ve enjoyed seeing how readers and non-readers alike have responded to the series, but I’ve also wished for an environment where the two sides could come together, and where the willful spoiling of non-readers would feel a bit less like readers refusing to let the series be experienced on its own terms—I know this doesn’t apply to all book readers, but it applies to too many, and has been a blight on the series. There will always be spoilers, and there will also be story beats that match up with the books, but there is no longer a close enough relationship that book readers are governors of truth as opposed to speculation, and that is no clearer than in the potential absence of Lady Stoneheart from the adaptation.

We will be debating these changes long after the series concludes its run. There will be more A.V. Club Inventories, and Buzzfeed lists, and other resources that viewers can use to look back and think about how different the show might have been if Lady Stoneheart had appeared. It also remains possible that we’ll see entries about how Lady Stoneheart’s appearance was simply delayed, moved to another part of the series to have a different effect. Regardless, though, the next nine months of speculation will be a crucial discursive space for readers to understand their relationship to the series, and my one hope is that we collectively come out the other side with an understanding of our shared ignorance with non-readers as to how a good percentage of next season—and the two seasons likely beyond that one—is going to unfold.

I say this both because I don’t like to see non-readers getting spoiled (given how much I’m against the idea of forcing spoilers on someone against their will), and because I personally think the transition from inevitability to uncertainty is exciting. I like not having a clear sense of what’s about to happen next: even though casting sides have revealed that we’re getting Dorne next season, it’s unclear how much we’ll get, or how they intend on connecting it to ongoing story developments. I like that I couldn’t tell you what the big Episode 9 climax of next season is going to be, and that the patterns the adaptation has established to this point are not just easily transferring over to my knowledge of the books. I like the idea of a stoneheart-sized hole in next season if only because it will be filled by something else, either entirely new or plucked from the rest of the narrative and developed accordingly.

And, if I’m being frank, I dislike the idea of the discourse around the series being entirely understood based on the divide among the show’s viewership. There will always be space for book-to-series comparisons. Every viewer will have their opinions on which is superior, and on the value of particular changes. But I think the show and its viewers would all be in a better place if we collectively acknowledged that there is a more basic response we all share to the series that feels—given recent events—to be a necessary one for readers and non-readers alike to engage with beyond simply comparing the two stories.

24 responses to “Heart-Shaped Hole: Game of Thrones Season 4 and the Death of Reader Certainty”