When you binge through Skam, you don’t always realize how the week’s clips have been divided: even if you’re aware of the real time conceit, you aren’t always thinking about the balance between the different days, although I imagine that many episodes ended on significant Friday episodes based on the weekly “climax” created by the linear airings.

This week, though, marks the first time in the fourth season where the Friday episode represented over half of the week’s episode, as a foreshadowed café visit for Sana and Noora turns into an unexpected chance for Sana and Yousef to talk through what they’ve been going through as of late. In addition to reaffirming their status as the season’s OTP, the episode also commits to a very different type of “courtship,” especially when compared to the comparable episode last season.

That episode, you might remember, was Even and Isak’s Romeo + Juliet moment in the swimming pool, a strikingly romantic scene that serves as a crucial turning point in their relationship. And so I can’t say I’m surprised that some people have noted that season four seems “slow,” as the easiest point of comparison between the two seasons—the relationships—are moving at such different speeds. It’s a return to the second season, really, as Noora and William’s first significant time together—when she gets stranded at his party and serenades him with “More Than Words”—took place in week three, but their kiss wasn’t until two episodes later. And although that is faster on paper than the relationship here, it’s notable that the foundation for William and Noora was built the previous season, a foundation that didn’t exist for either Isak and Even or Sana and Yousef.

I’ve said before there’s a risk that this won’t feel like Sana’s season if the show leans too heavily into telling stories about past POV characters, and that remains true. However, the pacing of the central relationship is distinctly Sana: of course she would move slower than her friends, given her religious beliefs and her steadfast commitment to controlling her own fate. Moreover, the show is also doing a better job of developing this element of Sana’s character in her interactions with her friends: this week’s storyline with Noora is indeed primarily serving to provide exposition about what happened with William (more on that in a bit), but Sana is also hiding her own heartbreak over Yousef in her attempts to help Noora get over hers. It’s not subtle to us as the audience, but it would probably be invisible to Noora, as none of the squad see Sana in this light, which is proving a useful fact in creating a stronger sense of us being rooted in a perspective of Sana that her friends can’t access (even if the contrast isn’t as striking as it was with the past POV characters).

Similarly, the way Yousef and Sana’s walk home from dropping a wasted Elias off at Noora’s apartment—anddd I just realized that Elias is at Noora’s apartment right after Sana told her she should date Muslim guys—plays out offers a philosophically complex take on the show’s meet cute structure. While Noora and Isak bonded with their respective partners over music and food/drink, Sana takes a different path: the initial awkwardness is punctured by some basketball and trash talk, sure, but when they eventually start talking it’s about their respective faiths. We might be missing parts of their conversation, but we don’t see Yousef confronting her about unfriending him, and we don’t see much in the way of small talk. We see someone who cares deeply about her faith trying to understand someone else’s, and working through the logic by which they each relate to Islam.

The resulting conversation doesn’t “resolve” their differences, but it’s actually a much more intimate conversation than anything we saw at a similar stage from the other couples. Although we could look at Yousef’s answer as a convenient way of getting the exposition about Even and Mikael out in the open, it’s also an effective way of shading his character’s disconnect with Islam, and moving beyond “Oh, it’s okay, I’m not Muslim” toward a more complicated character motivation. Sana, meanwhile, realizes that in many ways they feel very similarly about the value of Islam: they just have different ways of “taking the good,” with Yousef choosing to do so outside of the religion and Sana choosing to do so from within. Sana, like Yousef, gives little weight to the Quran’s statements on homosexuality, but they just have different ways of reconciling that with their faith, which is maybe not as much of a dealbreaker as she imagined, but still requires some inherent negotiation.

It’s a strikingly adult conversation all around, really. I love the bookending of the conversation with two lengthy shots of the two of them walking along. The first is long and awkward, as neither entirely knows what to say before Yousef starts dribbling the ball, but the second has Yousef asking the question he hadn’t wanted to ask earlier, calling the very value of religion into question based on the way it divides people. Sana doesn’t answer that question, but it’s one she’s likely asked and answered herself based on the way she’s offered sound philosophical guidance to Noora and Isak in the past two seasons. Their bonding here is not about one or the other trying to convince the other to feel a particular way: they’re each asking and answering questions, opening up on a subject that they—or at least Sana—rarely get to talk about despite being such a huge part of their identity. It’s in that way the opposite of Isak’s sexuality: while that was something he actively repressed and thus struggled to talk to others about, Sana is very open about her religion, but that in some ways makes it harder to talk about the nuances of it among predominantly Norwegian friends. 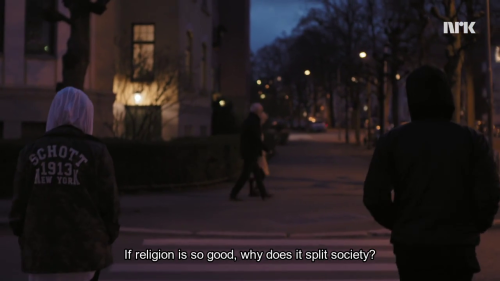 Because of the depth of their conversation, anchored by some strong performances and great golden hour cinematography, this feels like the most significant episode of the season thus far, as well as the most anchored in Sana’s perspective. This is impressive when you consider how much exposition we got on the William and Even fronts, as Noora and Isak’s stories are cleaned up. In the case of William, the reveal that Noora failed to testify against his brother struck me as a bit random, but leaves the door open for reconciliation (given the “breakup” is really just a failure of communication), which seems like a plausible bit of fan service. But in the case of Even, if Yousef’s perspective is to be trusted, the truth about Even and Mikael is a different type of tragedy, and one that actually shook Yousef’s faith. As much as the truth is worse than some of the speculated alternatives, I appreciate that the “secret” as it were isn’t something salacious, but rather rooted in sexuality (Even’s), faith (Mikael’s), and disease (Even’s bipolar disorder), and the way people’s misunderstanding of all can lead to something like a suicide attempt, especially among teenagers.

Although the chances of Isak and Sana’s stories converging like this is admittedly a little contrived (I don’t know if it was planned or decided retroactively, we’ll have to see if Andem comments) the “facts” as Yousef presented them allow for the story to resonate thematically in ways similar to Sana’s, and it felt like part of her story here instead of just a leftover from last season. Whether or not this holds as the season goes on and all of the stories start to seek resolution remains to be seen, but I think this was a key week of consolidation, anchoring the story in Sana’s perspective effectively.

6 responses to “You Gotta Have Faith?: Skam Season 4, Episode 4”