Erasing Herself From The Narrative: Taylor Swift and the absence of intimacy in the launch of Reputation 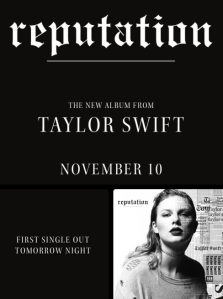 Beginning in 2010 with Speak Now, Taylor Swift album releases have been an “event”: in an age where prominent artists often struggle to clear 200,000 units in their opening weeks, Swift’s last three albums have all sold over one million copies in their first week. When Red released in 2012, it came with Papa John’s tie-ins and intense cross-branding with Target, the latter of which continued with the launch of 1989 two years later. Although Swift’s sound would change over the course of these records, gradually phasing out her country roots, the calculus of the album launches largely remained the same.

However, while these albums have undoubtedly been major music industry events supported by robust and organized marketing campaigns, they’ve never actually been positioned as such by Swift herself when they were first announced. Instead, they were debuted with a conscious effort to frame these albums as gifts to her fans as opposed to gifts to music retailers, utilizing the power of the internet to create intimacy between artists and their audience.

And so it was striking that when Swift’s most recent album cycle—delayed by a year—started this week, it began with the erasure of her social media history, a symbolic act reflective of the focus implied by the album’s title—Reputation—but also fundamentally at odds with the way she has launched three mega-successful albums in the past. And so even before she releases her first single, she’s announcing a marked departure over the way she understands her mediated presence, giving up the form of control she had previously but replacing it with another type of control that may mark a fundamental shift in the way she connects to her audience.

In July 2010, Taylor Swift was on UStream. I had forgotten about UStream honestly, but this live streaming platform was Swift’s choice to announce the news of Speak Now’s launch later that year. According to a Billboard report, Swift “shared the news with her fans on Ustream” in the broadcast, naming a launch date for the first single “Mine” and the album’s release in October of the same year. In the stream (you can watch the whole thing here), Swift talks about what she’s been seeing from her fans on Myspace, Facebook, and Twitter, and talks about how her summer has been going before going into information about her record over the course of the forty minute conversation.

The Billboard article reiterates the intimacy Swift was aiming for: she discusses her songwriting process, and reveals the “big news” that’s she’s moved into her first home. It’s a window into Swift’s life as much as it’s an announcement about her album, an extension of her posts on Twitter around the same time. Swift would ultimately release the album and the first single in a more traditional fashion, but she spoke directly to her fans with the announcement itself.

This approach evolved for the debut announcement for Red two years later. Moving to YouTube as a streaming platform, Swift held a “webchat” with a live audience of fans in Nashville. Holding court in a white armchair with the album art behind her, the entire setup is charmingly lo-fi: there’s multiple angles, but the lighting reveals that this is not a professional studio, and Swift is just a few feet from the fans in the front row. In December of that year, Swift posted the three acoustic performances from the broadcast on her YouTube channel, in which she uses the close proximity to her fans to share details about the album’s production, and look for affirmation when she reflects on how great Semisonic’s “Closing Time” is.

Billboard’s report on the livestream emphasizes how she was “very open with viewers,” and quotes Swift that “I’m so excited for you to hear the music, and the new direction,” reinforcing the centrality of the fans to her announcement. When she finishes, she expresses how excited she is to have not forgotten any of the words when performing them for the first time, and that she is “so glad it was for you guys first, because it makes me not as nervous because you’re nice.”

This approach reached its apex in 2014, with the album announcement for 1989. Teaming with ABC News and Yahoo! (who had hired Katie Couric to make a push into web video at the time), Swift’s announcement is no longer a lo-fi intimate session in Nashville, but rather a sleek production in New York City. Leaning on the broadcast intimacies of daytime talk shows, Swift arrives on a small living room-like set after first appearing at the top of the Empire State Building to “welcome” her fans to New York. She is seated a little bit further away from her fans, and notably speaks directly to the camera as she introduces the event as its host as much as its star. But the focus on her fans is still readily apparent: groups of fans from countries around the world are shown live via webcam, all there to bear witness to her announcement of 1989, her reveal of the lead single “Shake It Off” (complete with a dance-off listening party), and the debut of the song’s video, which extends the intimacy with her fans by including a group of them in its final dance sequences.

These livestreams share one central purpose: they give Swift control over the narrative. Although fans ask questions, it’s clear those questions have been chosen in advance, carefully structured to hit story points (her changing style in the switch to pop, the deluxe version of the record) that are important to the album cycle. And in this last case Swift is actively partnering with “the media” in the form of ABC/Yahoo!, which also included an appearance on Good Morning America shortly after. In all cases, Swift demonstrates a shrewd understanding of media cycles, devising environments that feel intimate and personal while simultaneously being deeply public, and immediately aggregated into stories at sites like Billboard.

All of this makes the launch for Reputation particularly out-of-character for Swift. This is not to suggest the launch approach is poorly designed: the “mystery” of the social media wipe was picked up immediately as a sign of imminent news, and the cryptic videos prompted speculation—snake or dragon?—that extended their life beyond their initial posting and allowed for easy spreadability within the multiple social platforms (Instagram, Twitter, Tumblr) she had scrubbed clean. And based on the album’s title and the cover artwork focused on the aesthetics of media coverage, you have to presume that the choice to clear her social media history was very purposeful, and reflective of the message she wants to get across with this new material.

However, it also literally erases her historical investment in an intimate relationship with her fans. While not as conversational with her fans as other celebrities, there would still be posts in her history that fans had perhaps been mentioned in, or connected to on some level. While these livestreams remain archived in various forms, there is an inherent ephemerality to social media posts that Taylor is leveraging here, but you can’t erase the fact that Swift’s public image has been something she actively played a role in constructing throughout her career. And while it’s true that this narrative shifted after 2014 when the Tom Hiddleston relationship and breakup became more toxic to her brand than previous public “scandals,” Taylor’s rejection of the media and attempt to retake control of her brand comes with the implicit rejection of the type of connection she’s built with her fans throughout her career, and through her album releases in particular. For the first time, Taylor Swift isn’t announcing a new album because it gives her a chance to reconnect with her fans around the world over the course of the album cycle. 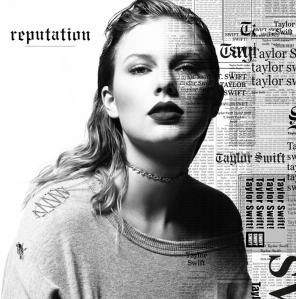 It’s possible that these intimacies could return with the launch of the first single from Reputation tonight, but it’s hard to imagine an album that—by all appearances—focuses on her grievances with the media being able to uncritically leverage the media in order to deliver another earnest livestream. Swift can still launch her single on YouTube and other streaming services, and potentially debut the song live at the VMAs on Sunday, but the unguarded—or, rather, performatively unguarded—insights into her process seem to be gone. Instead of discussing how her personal style is changing with each record based on a question from AshleySlater13, the album cover makes its own statement, left to stand on its own.

But those statements have, previously, been directed to her fanbase, in earnest terms: even if her records could be read as statements to ex-boyfriends or ex-friends, Swift’s public-facing comments have always framed her albums through the lens of her creative process and her relationship with her fans. She has never actually attempted to use her music to make a clear “statement,” but by scrubbing her accounts and announcing this album title and cover art before a stitch of music, Taylor is allowing—demanding—that her music be read in these specific terms and not necessarily in terms of her audience. Suddenly, instead of making a special delivery to her fans, Swift is just another artist who is making new music, using social media in much the same, promotional, mass mediated, impersonal form as her label would, without any of the direct address to her fans that characterized her previous album launches. And while it’s clear that Swift is still “controlling” her narrative as the internet pores over these images and scours her webpage for clues, she’s abandoned the articulations of intimacy that constructed her sense of personal control over her process. Where once Taylor’s control was a way of assuring fans that everything she did was about building a relationship with them, here Taylor’s control is being deployed to clap back at the media for…well, whatever it is that Taylor decides to use this album to say.

And in a potentially hypocritical—but maybe ironic, we’ll see just how much of a statement she wants the record to make—move, she’s still using the media to her advantage, including an absurd Good Morning America piece suggesting she is “reinventing the surprise drop” (this is not even close to being a surprise drop, and is identical to her previous album cycles in timing) and news that footage from her first video would debut on GMA tomorrow morning. But while that piece suggests that Taylor Swift is “reuniting with her public” with Reputation, the truth is that she hasn’t (yet): in the process of making a statement, she’s bypassing the fans she has previously used as her first point of contact, reframing her musical output outside of the intimacies that have been so central to her process and her success.

2 responses to “Erasing Herself From The Narrative: Taylor Swift and the absence of intimacy in the launch of Reputation”