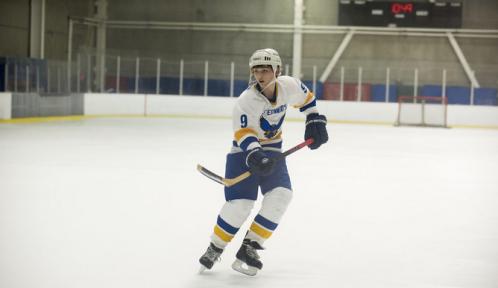 I’m Canadian, and thus compelled to use this promotional still of Henry playing hockey, which I remain deeply entertained they released before the finale. Bless you, FX.

I have written about The Americans a single solitary time here at Cultural Learnings, and it was in a review that was more or less about Mad Men.

That’s bizarre to me, but not unexpected: the show debuted in the midst of graduate school, when reviews became more scarce and the blog in general became less of a priority. It was also a show that I, for various reasons, found myself always falling behind on within a given season, such that I often wasn’t current enough to write something even if I had found time or the inclination to say something. And while I’ve been more vocal about my appreciation for the show on my Twitter feed, it still feels weird to have never really tried to grapple with my relationship with the show in this setting.

I’m not going to try to encapsulate the entire series in this review, or else I’d be up all night. But I did want to briefly capture why “START” is such a compelling entry into the pantheon of serialized drama finales, despite in some ways departing from tradition. While far from the cut-to-black ending of The Sopranos, The Americans still works against many of the instincts of contemporary drama storytelling, and in doing so managed to reinforce and strengthen my connection to these characters that’s existed even if I’ve never quite put it into words.

[SPOILERS for the series finale of The Americans from this point forward, obviously]

“START” ends in a way you could have predicted: Elizabeth and Philip Jennings, or the people formerly known as Elizabeth and Philip Jennings, standing in Moscow, “home” for good. But what struck me as particularly surprising was how much uncertainty they left behind: it began when Philip found the words to express the truth about the need to leave Henry behind, and it continued when Paige got off the train at Rouses Point before the Canadian border. Philip and Elizabeth Jennings may be gone, but the life they built in America still lives on in the people they were connected to: the children they raised, the neighbor they betrayed, and the seeds of doubt they planted in everyone who knew them.

I wasn’t expecting the show to fastforward in time and show us where every character ends up, but the finale is notable for eschewing death, and thus certainty. Elizabeth’s story during the final season was anchored by her care for hospice patient Erica Haskard (a tremendous Miriam Shor), but it wasn’t care at all: she was keeping her alive, in pain and turmoil, long enough to use her husband for information about the summit. Her story was about the pain of living, and “START” is about much the same thing. Philip and Elizabeth have to live knowing that they’ve left their children to fend for themselves as the children of traitors, while their children have to live with what they did (Paige) or didn’t (Henry) know about them. Oleg has to sit in jail knowing that he abandoned his wife and child for a failed mission, while Stan has to live his life knowing that he let enemies of America live, and that he might be married to one.

And because they have to live with it, we have to live with it. Once Elizabeth and Philip enter into the Soviet Union, we never return to America. While the penultimate montages cover lots of ground—Stan visiting Henry, Paige returning to Claudia’s apartment—once they step foot into the Soviet Union we are cut off from that world much as they are. It’s possible that Philip and Elizabeth will be able to get reports on their children, at least for a while. Perhaps there’s even a time in the future, after the fall of the Soviet Union, when the family could be reunited in some capacity, but that seems impossible in the moment. And “START” is about the moment, about freezing this moment in time—so critical in a period piece—and resisting the urge to tip its hand to what the future holds, or the “truth” of what’s on display.

Stan’s confrontation with the Jennings family is obviously an intense scene, but it’s effective because it subsumes Stan into our uncertainty instead of his own ignorance. The direction consistently pulls back to wide shots, both to remind us of how close yet far apart they are in the garage, but also to watch as the demeanor of the scene changes: we never actually see a close-up of Stan lowering his gun, but as Philip digs deeper into his truth, we eventually cut to the wide and see that Stan’s arm is at his side. Stan enters the scene as someone as far removed from the audience as you can imagine, having just learned what we’ve known since the series began. But by the time the scene is over, he has been debriefed, and watching him reckon with the “truth” of the last seven(-ish) years of his life is watching Stan’s life come unraveled. Philip’s decision to warn him about Renee is cruel, perhaps, but it was also necessary: Philip knows what this information will do to Stan, but he also knows he would turn to Renee as a source of stability, and that might be an even bigger mistake than letting the Jennings leave that garage (if that was even a mistake at all).

It also fuels the greatest piece of unity between the audience and the show’s characters, as the mystery of Renee becomes a critical piece of the text itself. Philip had raised the question of Renee previously, and the KGB had insisted that she was not one of theirs, but that was always highly suspect even before Philip and Elizabeth learned their superiors were conspiring against Gorbachev. And showrunners Joe Weisberg and Joel Fields knew they had created this mystery, and read every review that speculated about Renee (they’ve long said they read every review), and understood their audience’s relationship to this particular thread in the narrative. And so Stan becomes the surrogate for the audience for the first time, left to forever question his wife’s true allegiance, at least until he gets a definitive answer or goes crazy waiting for one. Laurie Holden’s final scene, watching over the Jennings house being raided by the FBI and quietly turning to go back inside, is some thrillingly ambiguous work, a troll that serves to heighten rather than lessen our connection to where this story leaves off.

That connection is undoubtedly driven by Philip and Elizabeth, and by the best performances on TV by Matthew Rhys (especially in the finale) and Keri Russell (especially in last week’s penultimate episode). They, like us, have to leave this world and this story behind. They are closing a chapter while acknowledging that the book is going to keep going, and with the knowledge that their past actions will shape the future of the book in ways they cannot take back or control.

But while I have so many questions about whether or not Stan will tell Oleg about letting the Jennings take the information about the KGB’s plot against Gorbachev to Moscow, and whether Paige will turn herself in or do as her father considered and establish a new life somewhere else, nothing about “START” feels—ironically enough—like the start of a new story. The ambiguity doesn’t feel like the fuel of spinoffs or epilogues: it feels like the finality of being forced to leave a story before its over, something that is bound to happen when you sign up for the life of a spy or you choose to watch (or create) a period piece that will eventually come to an end without recounting the entire lives of its cast of characters. It feels like the thrill of not knowing, and of being left with our opinions of where things were headed next, head canons that only highlight the depth of characterization managed over the course of the series. It feels like one of the most accomplished series finales of its era, managing to resist tidy climactic moments in favor of a simple ending that definitively ends the series without cheapening or flattening the story that was told.

Filed under The Americans, Uncategorized

One response to “Series Finale: The Americans – “START””