Season Finale: Crazy-Ex Girlfriend – “Paula Needs To Get Over Josh!” 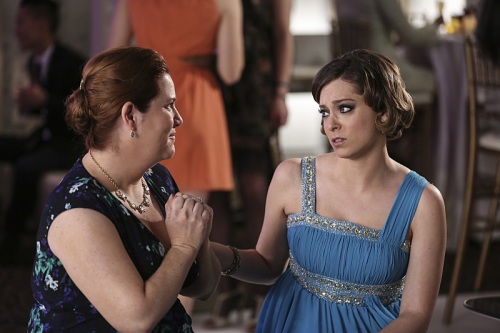 There is no question that The CW’s Crazy Ex-Girlfriend was among the year’s most ambitious shows, but it took me a while to warm to it.

The reason for this is actually fairly straightforward: I struggled with the fact that the “premise” of the show seemed so at odds with what made it compelling. Rebecca’s efforts to win the love and attention of Josh Chan were the central narrative engine of the show in the earlygoing, shaping her relationship with West Covina, and risking defining her character by a relationship I never bought. The show wanted to push against this, and uses its opening theme to give Rebecca a chance to articulate the intended irony of the show’s title, but the text and the title sequence didn’t always line up for me. The show was more about Josh than I wanted it to be, especially given that I thought Josh was kind of a dolt—I didn’t connect to the characters’ relationship, and so I didn’t connect to the primary way the show was pushing the story forward.

The show started to correct itself as it went along, and eventually it emerged with a fairly profound understanding of its premise: Rebecca may have come to West Covina because Josh lived there, but her actual “move” was focused less on what she was running to and more what she was running from: her unhappiness with her life in New York. And more recently, the show has approached a similarly profound realization that instead of moving toward Josh realizing that he was in love with Rebecca, his brief romantic moment with her would instead help him realize that he was unsatisfied in his relationship with Valencia. It was the show correcting my issue perfectly: Rebecca realizes that Josh was a means to an end of getting her into a healthier place, and Josh realizes that Rebecca was there to help him reach his potential (which extends into Rebecca helping him to get a job and believe in himself in other storylines).

And so I went into tonight’s finale believing that the show was heading in this direction, and was accordingly disappointed, although that’s as much on me as it is on the show. Basically, if everything had worked out the way I had wanted it to, there would be no show. Rebecca would be able to happily settle into a life of West Covina lawyering, free to pursue a relationship with Greg or anyone else. Josh could move on from Valencia, and pursue some of his various life goals in whatever way he saw fit. In the back half of the season, Crazy Ex-Girlfriend basically choreographed its ideal ending, a realistic and honest consideration of the way we gain perspective in our lives, and so I went into this finale believing that this was imminent…which meant I also forgot that this was a television show.