Review: FX’s Wilfred is Weird (in More Ways Than One) 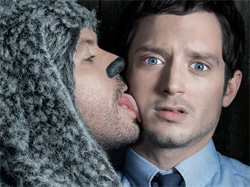 I am very curious to see how people respond to FX’s Wilfred, which debuts tonight at 10/9c on FX.

On the one hand, I’m interested in how divisive the show’s premise will be: this is a decidedly weird premise, and the show doesn’t spend any time trying to explain or justify it in tonight’s premiere. “Happiness” begins with Elijah Wood’s Ryan imagining his neighbor’s dog Wilfred as a bipedal, pot-smoking dude in a dog suit – creator/producer Jason Gann, to be specific – and simply moves on from there.

However, on the other hand, I’m wondering what those expecting something truly bizarre are going to think when they discover that Wilfred isn’t as weird as its premise might indicate. Now, don’t get me wrong: this is still a weird show, and all three episodes sent to critics feature moments which play on the premise quite directly. And yet, at the same time, all three episodes boil down to some pretty general themes, and this is at its core the story of a depressed man exploring his identity with the help of a friend. That the friend is imaginary, and that he is actually a dog, is not really the point of it all, which was kind of surprising given that “Guy in a Dog Suit” was pretty much all I knew about the show going in.

While I find Wilfred to be occasionally amusing, and certainly think that the premise holds narrative potential, what I’ve seen so far ends up coasting on the premise without really exploring it to any large degree. Individual setpieces may signal where the show may succeed in the future, and Wood and Gann may be strong anchors around which to build a larger comic world, but this is a surprisingly small show given its larger-than-life premise.

And while that may benefit that show in the end, it has resulted in a bit of a slow start that might engender a mixed reaction.