Tag Archives: A to Z

NBC at TCA: Searching for the Nuts and Bolts of A to Z 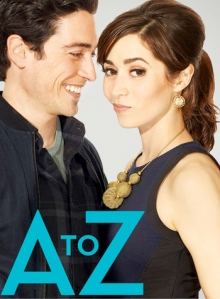 Of NBC’s comedy pilots, A to Z feels the most complete. This isn’t to say that none of their other comedy pilots were good—I liked Marry Me, for example—but rather that A to Z has a clear premise and announces its intentions in very plain terms. It is the story of a relationship between two characters, told from A to Z, that will span a set amount of time and reach a meaningful point of conclusion by the end of its first season.

For some pilots, press tour is about critics looking for answers because the show is purposefully vague, or because—as discussed in a separate piece—there are changes going on behind-the-scenes. In the case of A to Z, though, the critics in the room have questions about details that are offered by the pilot, which is structured to the point where critics have enough information to have specific lines of inquiry that the pilot itself forces into the conversation.

While both Cristin Milioti and Ben Feldman got questions about their chemistry as the romantic couple at the heart of the series, as well as questions about their notable fates in their previous projects (How I Met Your Mother and Mad Men, respectively), a lot of questions were directed to creator Ben Queen and producers Rashida Jones and Will McCormack. How will the show balance its “relationship comedy”—they avoided “romantic comedy” as a term—with its workplace structure? How will the season be structured relative to their relationship? And how do you intend to have a series run for multiple seasons if you’re setting such a clear timeframe for the story of this relationship to unfold in? (I should admit at this point that two of these questions were mine, so it’s possible I’m more invested in the structure of the series than your average person.)