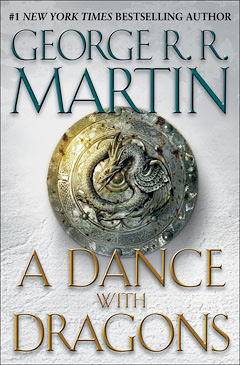 There are a number of ways in which George R.R. Martin’s A Dance with Dragons has been defined by its circumstances rather than the text itself.

It became almost a book of prophecy, initially intended to arrive soon after the last book (A Feast for Crows) but then entering into an endless series of delays. It was promised but never delivered, all the more problematic given that it was meant to hold the answers we had been waiting for. It was positioned as the second half of a larger whole, a continuation of a novel now over a decade old, and on some level an apology for a novel that some felt moved too far astray from the story they wanted to see.

The book’s challenge, in true fact, has nothing to do with these circumstances; in fact, the book’s greatest challenge is making it seem as if these circumstances do not even exist. More than ever before, Martin’s task is to get us lost in the world of Westeros and the lands beyond the Narrow Sea, to make us forget that we haven’t visited them for what based on some commentary has been an eternity. While the novel’s intertextual links to the book’s predecessors will remain, a reminder of what expectations have been placed before the text, it would be unfortunate if this book felt like an “answer” in any fashion. It instead needs to feel like its own statement, a statement not in response to criticism but in defiance to expectation.

I’d argue that Martin has managed this task. Although the novel’s odd position results in some issues with balance, strong thematic ties bind these stories together and fall into familiar rhythms that only gather more momentum as the book hurdles along. It is satisfying in every way I wanted it to be, and dissatisfying in every way that Martin intended it to be, ending on a note of utter disarray that nonetheless makes the novel (and its predecessor) feel whole.

I wrote all of this before diving into the discussion of the novel online, discussion that then made me incredibly self-conscious about the above. Now, it isn’t that I started to doubt my opinion: my reaction to the book has not changed upon reading these comments, and in some ways I feel more confident now then I did a week ago (when I liveblogged my reading experience). However, I have become wary of writing a larger review when it appears inevitable that I will be positioned as an apologist for having no large-scale problems with the narrative that Martin has put forward. I have my complaints, some of which I’ve seen bandied about, but the central complaints I’m reading about the novel are things that never really occurred to me.

It reminds me of when both Battlestar Galactica and Lost had their divisive series finales, both of which I enjoyed even while I had my quibbles with each. I’d be discussing the Lost finale with someone who hated it, who felt it shit on everything they loved about the show, and I’d sit there explaining why I felt absolutely none of those emotions and was satisfied. After having numerous such discussions, it became clear that we simply viewed the story differently, were watching for different things and for different reasons.

So when it came time to sit down and truly tackle A Dance with Dragons, it started with a question I didn’t want to be asking: could it be that I have been reading A Song of Ice and Fire wrong all this time?

[NOTE: There will be NO HOLDS BARRED spoilers for the entire novel. Admittedly, I’m vague about some details and probably won’t ruin every twist and turn, but I’m still forbidding anyone intending on reading A Dance with Dragons from reading.]

END_OF_DOCUMENT_TOKEN_TO_BE_REPLACED

Filed under A Song of Ice and Fire