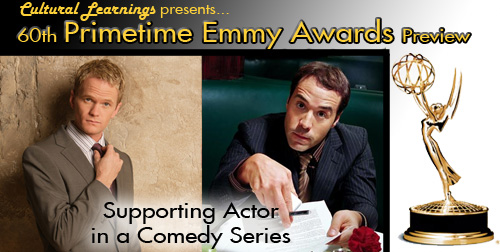 If there’s something to say about the Supporting Actor category for comedy series, it’s that it has far too many candidates, largely due to the nature of television comedy. There are just a lot of male comic performers who steal their respective shows, emerging from the spotlight of the “stars” if you will. When there are three of television’s biggest comedies with two contenders each, you know that the competition is going to be extremely difficult.

And yet, when it comes to narrowing the category down to winners, it’s been a bit too predictable in recent years: since 2002, only three people have won the award (Brad Garrett with 3, David Hyde Pierce with his fourth, and Jeremy Piven with two in the last two years). The result is that it’s not the kind of category that really opens itself up to new talent, even when like last year it had it staring in its face with nominations for Rainn Wilson, Kevin Dillon and Neil Patrick Harris.

But the hope is that history won’t repeat itself: with 30 Rock emerging with a few new candidates, a breakthrough comic role for a drama specialist, and a few fringe contenders, Piven’s reign might just be over as Emmy voters decide to go with something fresh and new. Or, if I know Emmy voters, Piven will walk with his third trophy, not undeservedly but unfortunately.

[Sorry for advance for a lack of YouTube links: Entourage clips are limited and NBC is uppity about clips thanks to Hulu, which I’d use if I could access it from Canada. My apologies!]