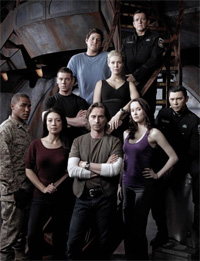 My experience with the Stargate franchise is somewhat limited: I’m fairly certain I’ve seen the movie, likely stumbled upon SG-1 at some point, and saw quite a few random episodes of Atlantis while home during holidays. It is a series that, for me, has always failed to keep my interest largely because of the repetitiveness of its procedural construct, especially with Atlantis. While there were some interesting ideas on that show, and even some interesting performances, I found that the universe being constructed wasn’t interesting enough for me to come back week after week for very similar storylines that would either end quickly or, at the most, develop into a 2 or 3 episode arc.

However, like any show of this nature, by the end of its run Stargate Atlantis had built up a large following based on a cast of characters that audiences related with, characters which would prove capable of sustaining repetitive storylines. It is for this reason that the decision to end Atlantis somewhat prematurely, before fans had felt its time was up, seemed particularly strange: yes, Stargate Universe (which debuts tomorrow night at 9pm on Space in Canada and SyFy in the U.S.) offers many of the same procedural elements, albeit with a twist, but because this cast of characters is completely different it means that audience goodwill starts all over again.

The biggest problem with tonight’s two-hour pilot for Stargate Universe is that I felt absolutely no emotional connection to these characters, or this story, and perhaps most importantly nothing the episode accomplishes makes me feel as if this is going to change in the immediate future. I won’t suggest that over time this group of characters couldn’t be engaging, but in the pilot their actions feel contrived and lifeless with a thin back story and an overbearing sense of helplessness which should bring them closer together but actually just operates as a false tension.

Free from the pressure of establishing a whole host of characters and the show’s premise, it is possible that these kinds of issues will be ironed out. However, even then, there is something about this Universe that feels muddled in a way which seems inherent to creative decisions that have the franchise starting over with a direction both too clear and too unclear.