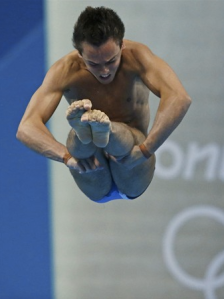 While I’ve spent some recent late nights leaving lengthy comments over at The A.V. Club’s nightly Olympics coverage, where my colleagues have been breaking down each night of NBC’s Primetime coverage, I’ve largely avoided more formal writing in the interest of academic pursuits (in this case studying for preliminary exams).

However, today was the first time I watched an event—the 10m Men’s Platform Diving Finals—in its entirety live during the day and then watched the same event during the evening session, and so I wanted to expand on a few tweets I sent out that rest on a few educated assumptions and general frustrations with the temporal wonkery of NBC’s Tape Delay strategy.