‘Drive’ Drifts to the Finish Line on Independence Day 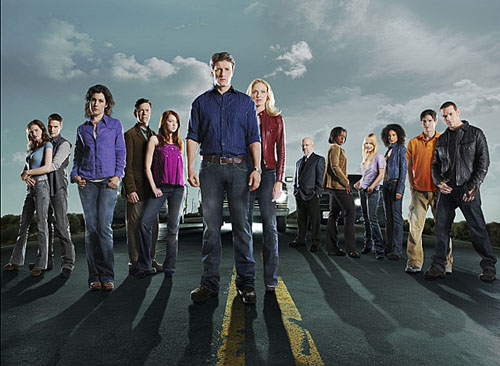 Yep: on July 4th, while everyone is getting drunk and heading to theatres to catch Transformers, FOX is counterprogramming with the final two episodes of its failed midseason drama ‘Drive’ (According to the show’s official site). Personally, based on the four episodes we saw, I think the series deserves better…but at the very least it fulfills their obligation to the show, and gets the episodes out there. Whether we like it or not, Drive is gone for good, and its return on July 4th is just a fleeting glimpse of what could have been.

Entertainment Weekly steps to the table with what is the first formidable interview with Lost producers Damon Lindelof and Carlton Cuse today, and it’s a doozy. There’s the explanation as to the reasoning behind the 3/16 (3 seasons, 16 episodes) scheduling format at the beginning, but tread lightly onwards: there’s some discussion of the final episodes of the season as well. Head to the link to read for yourself, or just click below for a little summary. Spoilers are light if not non-existent.

First, as far as this week’s episode goes, we will definitely be getting our first look at the mysterious Jacob this week within Ben’s flashback, and the episode will be setting things up for the show’s finale in just two weeks time. We’ve still got Charlie’s backstory in between, however, so we can’t get too excited for the finale quite yet.

However, we can get a hint as to its theme, which is referred to as “Rattlesnake in the Mailbox.” Lindelof explains the story behind this ‘title’ of sorts:

LINDELOF: Here’s how this came about. One day, Carlton was looking at his mailbox and thinking this: ”Wow! No one would expect this — a rattlesnake in their mailbox!” He shared this in the writers’ room one day, and every writer turned to him and said, ”What kind of sick thought is that?! Of course no one would think of a rattlesnake being in their mailbox, because only an extremely sick, deranged individual would put one in there!” And it was that which made us think, ”Actually, a rattlesnake in the mailbox is the perfect name for what we’re doing in our finale.” Because only an extremely deranged individual would think of doing what we’re doing.

Rattlesnakes? In Mailboxes? I like it. Sounds as if we’ve got plenty too look forward to.