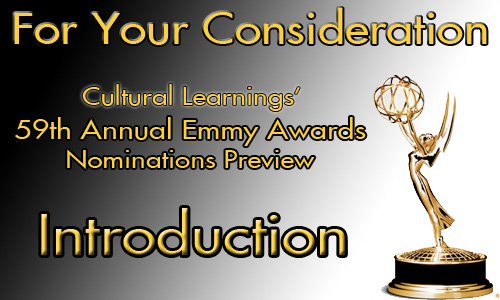 Here at Cultural Learnings, we pride ourselves in presenting the most comprehensive coverage of major award shows. Our extensive Oscars coverage should no doubt prove this, including an extensive and mind-blowingly long Oscar Liveblog. However, although I can’t prove this to you right now, Cultural Learnings is even better at covering the Emmy Awards.

Which is why I’m scrapping the proposed end of season report cards (I tried writing one about three times before giving up) and skipping right to the most extensive Emmy coverage you’ll find on the web. What does this mean for you, the reader? Well, it means that some busy weeks are still ahead.

As For Your Consideration ads start to clog your favourite entertainment sites and screeners are sent out to voters, Cultural Learnings will offer its own candidates for consideration. Over the next 5+ Weeks, we’ll be highlighting the shows and performers that most deserve the attention of voters and viewers. Each week, starting today June 1st, we’ll be focusing on one group of actors: for example, this week will be Supporting Actors. Each day, we’ll have one candidate for comedy and one for drama, resulting in 7 (Or more) potential candidates.

In the coming weeks, we’ll follow with Supporting Actresses, Actors, Actresses and of course Series nominations. After this five week period, we’ll focus on the writing and directing categories, along with guest stars and other such awards, before finally narrowing down the lists into our predictions for the 59th Annual Emmy Award Nominations on Thursday July 19th, 2007.

However, I still want your feedback on this one: if you have an actor or actress, or series, that you think we should highlight for consideration, let your voice be heard: send off an email to cultural.learnings @ gmail.com and chances are we’ll mention them at some point during this process.

And thus, Week One begins with our first two candidates that follow. If you want to see all of my chosen candidates as they are posted, I’ll be posting Pages in the header at the top of the page for each week in order to collect all of the information, so stay tuned for that.

Filed under Award Shows, Emmy Awards, How I Met Your Mother, Television