For Your Consideration: Lead Actors – Kiefer Sutherland and Zach Braff

[In Week Three of Cultural Learnings’ 59th Annual Emmy Awards Nominations Preview, we’re looking at possible contenders for the Lead Actor awards in both drama and comedy. Today, we present our first set of candidates. For complete listings for the Supporting candidates from the past two weeks, check out our For Your Consideration index] 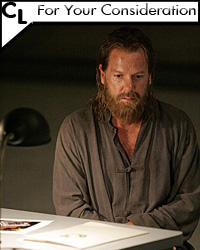 Lead Actor in a Drama

Jack Bauer ended season five of 24 abducted by Chinese authorities for his fourth season antics at the Chinese consulate. It was the kind of cliffhanger the show had never really attempted, not to this degree anyways, and the result was what seemed like an opportunity for Kiefer Sutherland to really play around this season. Released by Chinese authorities after some form of convoluted plea agreement we never got a chance to understand (and that didn’t matter two hours later), Jack returned a damaged man struggling to come to terms with the torture he endured. Over the first four hours, Jack Bauer was a damaged man; while instinct and adrenaline kicked in as they usually would, Jack was slow on the draw in pretty well every instance. Kiefer Sutherland portrayed this character with just the right amount of breakdown: Jack was still Jack, but it was now more of a costume than it was his true feelings. That performance was won that could have won Sutherland his second straight emmy, and it is still worthy of a nomination. However, unfortunately for Sutherland, the rest of the season let Jack down.

I’ve read some points about Jack recently, and one of them is that Jack didn’t have enough action this season, that he never really got to be Jack Bauer. I would actually argue that the problem with Jack this season was that he was exactly like Jack Bauer, and his torture-riddled body was magically perfect from hour five onwards. What could have been a dramatic arc for the character basically became an excuse to gain a strong opening set of episodes, and the result was that Jack didn’t have a purpose during the middle of the season. Combine this with the lack of action, and you had a character without character, never really allowed to have any emotional depth.

Despite this, Kiefer is here is because he is both likely to be nominated and probably deserves it. I hold the writers responsible for all of the problems Kiefer faced, and he always lived up to whatever they asked of him. Also, while it was too little too late, the end of season arc featuring Audrey gave Sutherland a chance to return to the more emotional arc that was stronger at the beginning of the season. The thing about Sutherland is that his performance is always strong: even when the series dipped in season 4, for example, Sutherland was never responsible. From an acting perspective, Kiefer delivered an even performance pretty well all the way through Season Six, which is worthy of Emmy consideration.

However, his chances of winning will all come down to which episode of the show he submits, and he has chosen to submit the first hour of the show’s two-hour season opener. This submission will pretty well ensure that he gains a nomination for the series: it shows the pain he suffered while in China, it shows him resolving to give up his own life for his country, and at the end of the episode he goes all Vampire on one of Fayed’s men and escapes their clutches. That combines the type of emotional storyline I discussed above with the bad-ass Jack that Dave and others were looking for. I think that the episode’s potential for Jack’s character wasn’t lived up to, but Emmy voters don’t know that. And, as a result, this episode will be more than enough to put Kiefer Sutherland up for Emmy consideration. 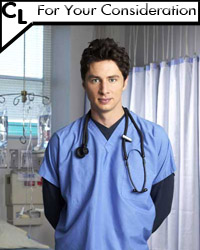 Lead Actor in a Comedy

After the cinematic success found with Garden State, Zach Braff has become an award show mainstay for his role as John Dorian on NBC’s Scrubs…and I don’t really know why. Well, that’s not true: I can see how the combination of his popularity and his consistent performance have given him a higher profile than other superior comic actors. However, I figured out another reason while preparing for this series: there just aren’t that many male comedy leads out there right now. Braff, in comparison to what others there are, is actually a seasoned veteran with some strong comic turns and a sense of character able to switch between silly and serious quite easily. While J.D. no longer has the freshness he had during the first seasons, and the silly stuff can often go too far, Braff was as competent as ever this season…and in a shallow pool, that competence is more than enough to be considered for an Emmy award.

I’m being a bit hard on Braff, I’ll admit, but I do think that he’s delivered some strong performances this season. Like Sutherland, the material sometimes left Braff out to dry, asking him to be an insufferable jerk such as his phone call to a deceased ex-girlfriend’s mother that was just completely distasteful. However, he handled the entire arc with his pregnant girlfriend and her departure with his usual sense of everyman charm, and I never became one of those people who was entirely apathetic towards his character. I think that J.D., like Braff perhaps, has become complacent and immovable within the show’s storylines. With all of the intern/resident anxieties basically gone, J.D. seems too sure of himself, and his awkwardness was part of what made Braff’s performance so strong.

And those moments still exist, such as his interactions with John C. McGinley’s Dr. Cox, and I think that’s why he’s still on this list as opposed to just a lack of candidates. I still like to see Braff do his thing, entertaining in his wacky ways, although perhaps less than I did five years ago. I don’t think Braff was worth the huge salary that ABC is paying him for the show’s seventh season (ABC produces the show), but I think that he is part of what makes the show what it is. Still capable of emotional storylines and off-the-wall antics, Zach Braff was able to sustain his strong set of performances on Scrubs to the degree that he is likely to be considered for an Emmy award this year…but I worry about the act wearing thin in the show’s final season.

This episode is the selection for a lot of the show’s actors, as well as the show itself, but I think it is best for Braff for one main reason: since the entire episode is wacky and takes place in the head of a woman with a brain tumour (Spoiler Alert!), his performance can be as off-the-wall as he wishes it to be. Musical comedy is apparently Braff’s calling, as he knocks each song out of the park. In a season where the emotional material wasn’t as powerful in years previous (The series struggled with it part way through the season), it makes sense to focus on the wacky comedy it does best. Braff gives a bombastic performance in all of his songs, but I think that Guy Love is perhaps the one most likely to capture the attention of Emmy voters this year.

3 responses to “For Your Consideration: Lead Actors – Kiefer Sutherland and Zach Braff”