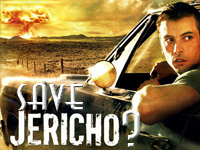 Bob Barker’s final episode of The Price is Right was a classy affair that, despite being just another episode on the surface, felt representative of everything the show stood for. However, as we say goodbye to Bob Barker, it was hard to ignore the push that CBS is giving one of the shows it said goodbye to in May before reconsidering. That show is ‘Jericho’.

The advertisement is everything that CBS should be doing to promote the show (It is also being placed at the end of some CBS Innertube viewings). Starting with various scenes from the end of the show’s first season, it reminds viewers that only once in a long while is there a show that fans will fight to keep on the air. And that show is…Jericho.

The commercial goes on to inform viewers that the show will begin reruns on July 6th, and on the whole really makes the show out to be something that people should pay attention to. And let me tell you, the commercial is effective: it features the emotion of the show’s characters and doesn’t try to bog viewers down in the conspiracies seen throughout the show’s first season.

Now, while the show wasn’t peppered with the ads or anything, I think it shows that CBS is willing to spread the word about this series in what might well be one of the highest rated specials of the summer season (We’ll get final ratings tomorrow). For now, fans of the series can finally believe that the network will be in their corner, and can hope for more coverage this evening during the Daytime Emmy Awards.

Tagged as CBS, Save Jericho