The Ten Reasons You Should See Pixar’s ‘Ratatouille’: #7 – The Supporting Voice Cast 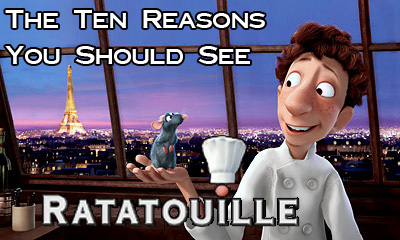 In an animated film, it is becoming trendy to list all of the big stars you have voicing supporting characters. The flaw in this logic is that it is designed to bring us into the theatres, but it actually destroys our enjoyment of the film. People might not realize it, but as soon as you start to think about voice talent you start to take yourself out of the film’s universe. It was a problem I’ve had with the Shrek series: those characters that exist entirely as a celebrity voice (Justin Timberlake as Artie in Shrek the Third) are just not well-rounded, and I can never take them as being a real character within this universe being presented.

There is not a single “star” being promoted as part of Ratatouille’s voice cast. I will be getting to the film’s lead perhaps in a future feature, but what I want to discuss here is the supporting voice cast. Because, in what is perhaps the biggest compliment an animated film can receive, I believed every single one of their characters without thinking twice about who was voicing them (Although my curiousity, of course, got the better of me. But it wasn’t a questioning inquiry). Regardless of my ramblings, their work is Reason #7 you need to see Pixar’s Ratatouille.

What makes it so extraordinary is that they’re all playing characters at an extremely deep level. What I mean by this is that Lou Romano, a Pixar employee, feels just as at home within the voice cast as veteran comic actor Brad Garrett. It means that Janeane Garofalo somehow manages to craft a French accent that turns her into an entirely different person, a person who fits right in the same universe as Ian Holm’s similarly fantastic accent. It means that Brian Dennehy, a veteran dramatic actor, is able to play the father of Peter Sohn, another Pixar employee, without us even batting an eyelash. Also, Will Arnett was able to be in this movie without me being aware of it until his name popped up during the credits. And I wouldn’t have even recognized James Remar as being part of the film. And then Peter O’Toole pops up, and he basically knocks his entire performance out of the park (Which is another thing I’ll be discussing later). Even longtime Pixar fave John Ratzenberger blends wonderfully into this Parisian setting.

What makes this supporting cast so great is that all of them fit. Whether they’re playing rats or humans, good guys or bad guys, they all play their roles with such affection that you don’t know they’re actors sitting in a studio. Hardcore IMDB nuts like myself might return and try to search out who voiced what character, but we do so only in awe of the fact that we couldn’t figure it out from the film. However, for most people, I think that they will simply be immersed in these characters. Brad Bird has assembled a supporting cast that embodies everything this story, everything these characters are all about. Their work, substantial and powerful and hilarious, is yet another reason you need to see Ratatouille.

One response to “The Ten Reasons You Should See Pixar’s ‘Ratatouille’: #7 – The Supporting Voice Cast”