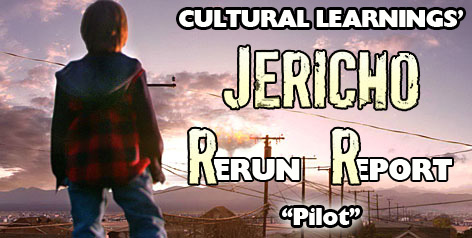 While certainly not a depressing defeat at the hands of the Summer Television ratings decline, CBS’ Jericho returned last night (Cultural Learnings Jericho Rerun Report – “Pilot”) with ratings that are considered a mixed result. There are some positives, but since this is just the pilot it’s hard to tell how being a serial will affect future weeks.

– Jericho won its timeslot in viewership, something that Close to Home had done in the weeks previous.

– Jericho held onto a large chunk of its Ghost Whisperer lead-in (4.95 Million Viewers)

– The show finished behind last week’s episode of Close to Home considerably in total viewers, and by a small margin in Adults 18-49.

– The show failed to be even close to competing with Friday Night Smackdown! in key demos.

All in all, I’d say it’s a disappointment in the fact that the show couldn’t elevate CBS’ ratings over last week’s crime procedural. Still, the show maintained a great deal of its lead-in and there is still a chance that next week could see the series perform slightly better. However, it will actually face more competition next week when FOX burns off its remaining episodes of Drive in the timeslot.

And if Jericho can keep these numbers steady throughout the summer, I think CBS will be pleased.