Summer TV Wrapup: The Biggest Flop(s) – Pirate Master and On the Lot 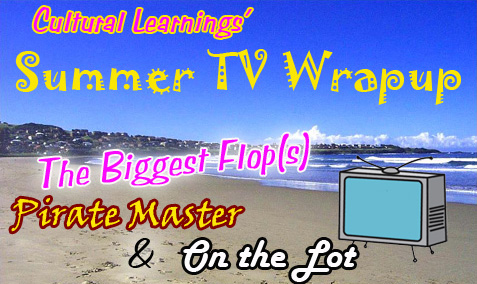 It is no coincidence that the two shows that have tied for the Summer TV Wrapup recognition of The Biggest Flop have something in common. Mark Burnett created Survivor and The Apprentice, and immediately rocketed into the upper echelon of reality TV producers. He’s the only one who is a personality, a character in his own way. While this usually helps him, it has actually made his fall from grace this summer all the more damaging. Pirate Master (CBS) and On the Lot (FOX), two sure-fire hits, flopped this summer, and Mark Burnett is the man to hold accountable for that fact.

Pirate Master suffered from the very beginning from both poor ratings and a lack of cultural buzz. While the show was not terrible, it was criminally derivative: it didn’t deviate far enough from the Survivor formula to bring in new viewers, and its failure proves that people aren’t watching Survivor because of its quality but rather because it’s Survivor.

The show was cancelled 2/3rds of the way through its run, and will spend the remainder of its time on CBS.com. The show never had the personality, never had the host, and never had the magic touch we’re used to seeing from Mark “Midas” Burnett. In failing to live up to that pedigree, it was by far one of the summer’s biggest flops.

On the Lot, meanwhile, had all the pedigree you’d usually need: Burnett was not only attached as producer, but so was legendary director Steven Spielberg. It was supposed to be FOX’s buzzworthy summer hit, but they forgot something very important: the summer viewing audience aren’t movie geeks.

Shows about dancing, profanity-happy chefs, karaoke singers…these are escapist and inclusive to the general viewing public. Short films, however, are not. The show has limped on in a shortened format, but even Adrianna Costa’s ludicrously short dresses can’t save this show from going in the books as the summer’s biggest flop.

3 responses to “Summer TV Wrapup: The Biggest Flop(s) – Pirate Master and On the Lot”