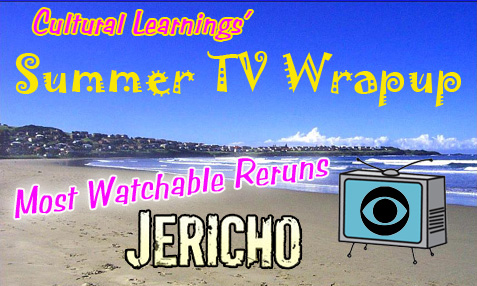 It is my view that summer reruns are an underutilized tool in promoting a series; however, I see where the concerns lie. There is little reason for people to turn into reruns: they’ve likely already seen the episode, and even if they haven’t they’re unlikely to choose a repeat over new programming on another network. However, some reruns are more watchable than others, and there is one distinct reason why: because people have a reason to watch.

When Jericho was renewed by CBS in June after a month-long fan campaign to save the show, there was a promise made that the show would be rerunning over the summer. Immediately, fans began to get people excited about this prospect. Jericho is the perfect series for reruns: it lost a portion of its original audience thanks to a hiatus, and it created buzz that made people curious enough to tune in.

And there’s where I think comes the show’s watchability: you feel like you’re watching something that has been earned, that has been warranted, and that has some sort of meaning. This isn’t just CBS filling the schedule: this is the work of thousands of devoted fans beaming into your television set Fridays at 9pm. I, personally, find that somewhat inspiring.

Now that we’re into episodes I have never seen, it is so interesting to see how the show progressed. And yet, even hardcore fans are rewatching episodes, and finding new things they’ve never seen before. These aren’t just reruns, they’re an extended victory lap for these fans, and they’re making the most of it.

Could they be getting better ratings? Absolutely. But, in the end, I don’t think that this in any way negates their intrinsic value. In an era where reruns are apparently taboo for serial programs, Jericho is bucking that trend and making a name for itself. When the show returns at midseason, hopefully someone will look back and realize how good these reruns were for the series.

For now, naming them the Most Watchable Reruns of this summer season is the most I can do. The Jericho Rerun Report, a recurring feature, could return next week: I’ve fallen behind thanks to various activities, but I do plan on bringing it back. In the meantime, here’s our coverage thus far.