When a category at an awards show features two actors or actresses from the same show, sometimes logic points towards the two individuals canceling one another out. This would allow another competitor, not competing against someone from their own show, to waltz away with the trophy.

What is unique about this year’s race for Supporting Actor in a Drama is that despite the fact that Michael Emerson (Ben) and Terry O’Quinn (Locke) are both on Lost, they remain serious contenders for the Emmy. These two actors spent much of the show’s third season together, locked into a relationship filled with philosophical discussions and tense drama. Their fates are intertwined in the show’s storyline, but their Emmy chances are also directly connected to one another. 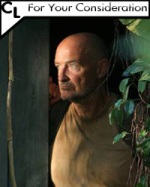 And although their category has spoilers waiting in the wings, this Dynamic Duo still stands out from the crowd when it comes to picking an Emmy victor. Why? Because they’re just that damn good.

When Emmy voters are shown the tapes that they are to base their decision on in the supporting categories, they are edited down to only the scenes featuring these actors. This means that actors with more screen time are likely to receive a bigger boost than those who only feature in parts of the episodes.

How does this benefit Lost’s duo? The answer is simple: in the two episodes submitted (Emerson’s “Man Behind the Curtain” and O’Quinn’s “The Man from Tallahassee”), these two actors are both heavily featured and, more importantly, are also featured in the other actor’s tapes. While each actor gets the flashback sequences to themselves, their on-island activities are almost entirely done together in both episodes.

This means that, compared to the other actors in the category (T.R. Knight, Masi Oka, William Shatner and Michael Imperioli), Emerson and O’Quinn get nearly double the screen time. The more material that a voter sees of the two competitors, the better chance of them voting in their direction.

Of course, it is entirely possible that the vote might split and someone else might creep in. However, I would argue that the performances these two actors give is far too fantastic in both quality and quantity for that to keep either of them from winning. If 50% of the voters are pulled towards either of the Lost duo, they still have a chance of winning it.

And while I don’t really want to pick favourites, I would argue that O’Quinn certainly has the edge. “Tallahassee” is an emotional roller coaster where we finally learn how Locke lost the use of his legs, and even if his on-island material is dominated by Emerson I think that flashback is too resonant to ignore.

“Curtain” is a great episode for Emerson, but his back story is much less emotional and rather kind of disturbing, and his on-island activities head in a less realistic direction than Locke’s storyline. It doesn’t make him an unlikey victor, as he is fantastic as Ben in both episodes, but it is a barrier I think O’Quinn lacks.

It would truly be a pity if neither of these actors are recognized. Lost hit some acting highs this year, and Elizabeth Mitchell’s absence from Supporting Actress needs to be rectified. Not only that, but O’Quinn was robbed two years ago for the show’s first season, and Emmy is no stranger to rewarding performers for their past mistakes. Hopefully, in this case, they might realize just how much of a mistake that was.