Last year, CBS’ Upfronts were a shock to fans of Jericho, a drama that had struggled mightily in the face of scheduling woes and was upended by a network with extremely high standards; heck, that year they even got rid of Close to Home, a show with much higher ratings but just not enough balance between buzz and Nielsens for the network to continue on that path. They wanted things to be a little hip, but not too hip, with good ratings as well. In other words, they’ve got an idea of what they want.

And now, a year later, things aren’t much different: Shark is getting the boot for not having enough buzz, and Moonlight is being tossed out with the bathwater because its ratings just aren’t enough to match its overwhelming and motivated fan base.  This news broke yesterday, but today we get to learn which shows are replacing them, and whether or not CBS’ high standards are going to just have more casualties in a year’s time. 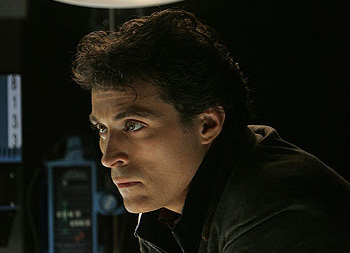 It gets the biggest lead-out in television amongst demo viewers, so there’s something to be said for the potential quality of this British import based on the BBC miniseries starring Patrick Stewart. It comes from Jerry Bruckheimer, who also produces CSI, and its real barrier is that is lacks star power (Rufus Seawell is not exactly a household name). It will be facing off with ABC’s import of Life on Mars, and I actually think that this show’s premise (Investigating abuses of science and scientific crimes) seems less intriguing at the end of the day. This is the first time the network has tested a show in the slot since Shark got moved from it, so we’ll see how it turns out. 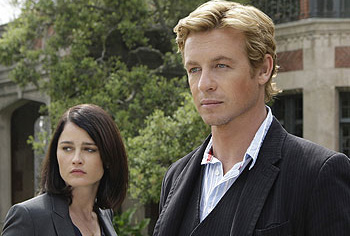 The Mentalist – Tuesdays at 9pm

Simon Baker, who previously had his own show at CBS get canceled in The Guardian (And who was also in Smith last year, so the network loves him), returns as a person who used to fake being a psychic but now just uses his powers of observation to solve crimes. Now, this is exactly the plot of Psych, but in drama form, so I’m curious to see how this one plays out; however, plagiarism aside, Baker should be pleased that the show avoids the death slot that is Tuesdays at 10, plus gets the highly rated NCIS as its lead-in. 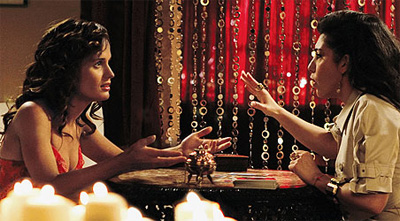 Yes, Moonlight fans – this is the show that replaces vampires, a romantic comedy starring the admittedly wonderful Elizabeth Reaser (Eva/Rebecca on Grey’s Anatomy) based on an Israeli series. The show has a lot of buzz at the network, so there’s hope that it can build from Ghost Whisperer’s female-skewing audience and provide stability in the demo during the middle time period on the night. Show revolves around a woman who learns that she has met her soul mate, and goes on a desperate search to find him. 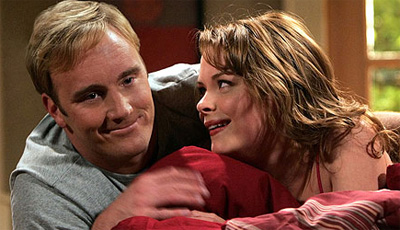 CBS is branching out to comedy on Wednesdays, pairing the returning New Adventures of Old Christine with another show about a divorcee, this time played by funnyman Jay Mohr who now needs to be killed off Ghost Whisperer. He seems an odd choice to play someone who’s been married for fifteen years, but I have to at least pay attention to the series since Paula Marshall (Show Killer) is playing his ex-wife. And, show killer or not, I find her humorous. 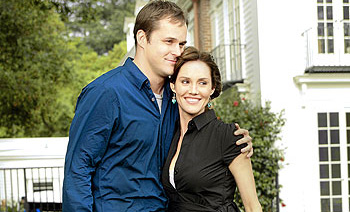 It’s the spot you want to be in as a new comedy, as it has brought great success to many a series – it doesn’t have a big name in its cast, but the series revolves around a man with a wonderful life…until his parents come around. Sounds a bit too cliched for my tastes, but it fits right in with Two and a Half Men before it, so perhaps the show can find some success.

From the executive producer of Jericho, this series sounds awfully intriguing – I’ll quite from the press materials.

“A group of family and friends head to a secluded island off the coast of Seattle for a destination wedding. In addition to being picturesque and romantic, the island is also infamous as the site of a homicidal maniac’s killing rampage seven years earlier. When people start turning up dead, that becomes a major concern.”

It sounds like a murder mystery theatre setup, to be honest, but with the right characterization there is potential here for a nice 13-episode run of thrilling television…but that’s being generous to a potentially faulty execution.

The New Adventures of Old Christine – Wednesdays at 8

This show barely made the schedule, if only because CBS knew that ABC was going to pick up the comedy the second they didn’t. This means that it’s coming back for a full season, hopefully to anchor an hour that could also see comedies from FOX.

It ended up with the slot behind Two and a Half Men to end the season, so it looks like another holding period for the David Spade-starring comedy to see which comedy will fail enough for it to be parachuted in once 2009 rolls around.

Without a Trace – Tuesdays at 10

The missing persons drama is moving into a death slot for CBS, where they hope its stable viewership can prove that televisions were manufactured unable to turn to CBS during this time period.

The Amazing Race – Sundays at 8

Although annoyingly interrupted/delayed by Football or other sports on occasion, Sundays have treated The Amazing Race well, and it will be returning there in the fall.

Cold Case has always been a subtle success on Sundays, so now it has a leadout to match. The Unit has been pulling decent numbers of Tuesdays for a while, so the network is hoping it serves better than Shark in this difficult slot.

No surprise here, just wanted to personally thank CBS for not messing with the best multi-camera sitcom of the new generation of sitcoms.

Moonlight – It seems as if Moonlight fans’ work organizing blood drives has been largely ignored by CBS on this one, and the line sounds eerily similar to Jericho’s. From Nina Tassler, via Sepinwall:

“It was a factor, obviously… It was a passionate fanbase, and that’s not a bad thing. It’s just hard to translate that into numbers.”

I won’t get into the philosophical debate about what numbers are in this crazy world of television, but suffice to say that fans at sites like Moonlight-United are not likely to be satisfied with this response.

Shark – No big surprise here, as the James Woods drama just never found traction when it returned post-Strike. Outside of the bubble of the post-CSI slot, just like every show before Lost that aired on ABC in the same period, there just isn’t the same success.

Say what you will about CBS, but their high standards do bring success – without American Idol, they would trounce the other networks in terms of total viewers. They are even finding more success as of late with their Monday lineup proving competitive with Dancing with the Stars, and their Thursday lineup weathering the post-strike struggles better than ABC’s. However, that doesn’t mean that they’re satisfied, which is why we see the situation we have.

Moonlight was done in by a deluge of strong drama candidates, each that (admittedly) fit well into their respective timeslots and into the overall sense of CBS as a brand. The problem is that they like this bubble so much that they are always so quick to throw anything outside of it away. Jericho was treated poorly in many ways because it wasn’t in their wheelhouse, and Swingtown (Their much-hyped sex romp drama that was supposed to signal changing times at the network) will air more than a year after it was first announced, held until June due to quality issues. The network is afraid of change, and this year they’ve definitely replaced a show that’s a little too sci-fi for their tastes in Moonlight in favour of programming that fits their demographics.

Whether that works out for them, and whether they’ll regret it, will definitely depend on seeing what happens in the fall.