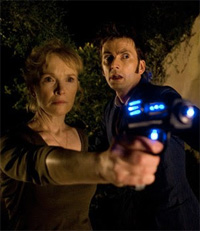 Doctor Who? My question exactly.

This is not to suggest I don’t know the basic premise of Doctor Who: he’s an omniscient figure who travels through time/space solving exotic problems with the help of assistants (wait, I think it’s companions). However, I’m fairly certain there’s a deeper mythology here than “he’s mortal enemies with those ugly robot dudes that I think are called Daleks,” which means that going into Doctor Who: Waters of Mars (which according to the press kit is the second of the four final “movies” that David Tennant is doing before running off to star in an NBC pilot) my knowledge of this universe is a cribbed together collection of tidbits gleamed from pop cultural exposure and a couple of random episode viewings during the Eccleston period.

But, as was the case earlier this year when Russell T. Davies created an enormously compelling, stand alone piece of entertainment with Torchwood: Children of Earth, Doctor Who: Waters of Mars (which airs tomorrow night, December 19th, at 9pm ET on SPACE in Canada and on BBC America in the U.S.) is capable of engaging just about any audience. While it doesn’t have Children of Earth’s real world commentary on government corruption or anything so complicated, it tells a tightly driven story that at its core speaks to the inherent dilemma of being a man who is capable of changing time but only to a certain extent, and the plight of humans out to save the planet but finding themselves at the precipice of placing that planet in even further danger.

The result is a very compelling piece of television in its own right, but one that feels like a turning point for this character as he David Tennant prepares to say goodbye to what is very clearly a career-making role.

There is no adjustment period at the start of Waters of Mars, to the point where you might wonder if you missed the first twenty minutes. While it’s clear from their interactions that the crew of Bowie Base One, the first off-Earth colony that has been operating without a hitch for eighteen months. When you first meet the crew, led by the stern-faced Captain Adelaide Brooke, you find a group of people eager to start the next stage of their journey: they’ve been living off protein packs, but with Christmas coming and the eco-dome offering up fresh vegetables they’re hopeful for a real feast, a chance for a taste of what they left behind to be part of this mission.

There is an entire series to be mined from this material, humans who abandoned their children, their grandchildren, their siblings in order to be on this mission. However, we are quite literally just dropping by, as the Doctor arrives on the fateful day of November 21st, 2059 all too aware of what is about to happen. The “what” is ingrained in his memory, an important event in the history of humanity and the universe as a whole, but the question that the film fills in is why. The result is the usual blend of horror and suspense that the show loves to unearth, but don’t expect there to be any sort of elaborate answer to the question. Waters of Mars is stylistic in a way which refers to a bigger picture that it never has any interest in discussing further, both because it expects the audience to be able to fill some of it in and, more importantly, because it ultimately doesn’t matter.

There’s a lot to like here, including a great turn by Lindsay Duncan as the complicated Captain Burke and some subtle but enormously creepy effects work that manages to turn water into a legitimate threat in a way that doesn’t seem plausible, but the focus is ultimately on David Tennant. For most of the movie, I was sort of perplexed at the level to which the Doctor was taking a back seat to the scenario being presented. I understood that Duncan’s character is officially labeled his companion, meaning she’s integral to the series, but circumstances have the Doctor holding back and resisting an urge to get move involved. Davies has smartly constructed a simple but engaging group of characters so that this isn’t a fundamental problem, but considering that this is Tennant’s last hurrah in the role I was expecting something punchier.

But the end of Waters of Mars, which very clearly sets up what’s on the way in The End of Time (which debuts later this month on both sides of the pond), is a tour de force for Tennant, the sort of emotion that demonstrated why people became attached to the actor’s run on the series. What felt like a story where the Doctor is as much an observer as we are, both dropped onto a strange planet with almost no context (except for that which the Doctor has stored in his mind and eventually shares with us), slowly develops into a story in which the Doctor plays an intricate part, and in which Tennant captures both the inherent tragedy and frustration in his position as Time Lord. It’s a really great piece of buildup and anticipation from Davies, and Tennant delivers the big moments with every bit of gusto he has left in him.

Perhaps the biggest compliment I can pay Waters of Mars is that it convinced me to watch the first of the four Tennant films (Planet of the Dead, co-starring Michelle Ryan, which is repeating on SPACE tonight), and has led me to actively anticipate The End of the Time when it comes later this month. I don’t know if I’m quite jumping on the bandwagon yet (I’ll likely be ignoring the fourth Torchwood season, for example, now that it has abandoned its miniseries conceit), but I’d say that Doctor Who is much more on my radar now than it was before, which is definitely a reason to tune in tomorrow night.

Doctor Who: The Waters of Mars airs tomorrow night, December 19th, at 9pm ET on SPACE in Canada and on BBC America in the United States.

Filed under Doctor Who