The Familiar Five: Reflections on a Summer Movie Marathon

It was interesting to see how people responded to the notion of seeing five movies in theatres in a single day. My initial instinct was that it was madness, an opinion shared by many others; others thought it wasn’t a big deal, remembering Oscar marathons or film festivals where they sat in theatres for just as long if not longer. What everyone could agree on, however, is that it’s decidedly abnormal, which is why I jumped on the chance to attempt it once I realized it was temporally possible.

I saw four movies back-to-back in January of 2011, the first time I had attempted such a marathon, so this was not entirely unprecedented. However, this felt like a different experience, and not just because I was adding a fifth movie to the equation. Adding a fifth movie was indeed a challenge, necessitating more scheduling juggling to get the timing to work and forcing an earlier morning, meaning that I’d more likely be sleep deprived. However, it also depends on where the movie marathon is taking place, both in terms of cost and nearby amenities. My previous marathon took place at a theatre with discounted Tuesday tickets and nearby fast food for lunch; this marathon took place at Madison’s AMC 18 Fitchburg, which also has inexpensive matinees but is isolated to the point I had to walk fifteen minutes beyond where a bus was able to take me.

There’s an argument to be made that all this preparation—the Large Popcorn bag you keep refilling halfway because you know you’ll eat it all if they give it to you, the two orders of overpriced chicken tenders constituting meals, the snuck-in water bottle you refill in the water fountains, the Ziploc bag of ginger cookies, the brief bit of fresh air to keep sane—overpowers the movies themselves, already at risk of seeming lost as you jump from film-to-film, genre-to-genre over the course of the day. At the same time, though, there’s something nice about losing yourself to the movies for a day, rather than watching a movie distracted by what I’d been doing before or what I need to do after. I may have been tired by the time I reached my fourth and fifth movies, but I was also squarely in the moviegoing mindset.

My particular moviegoing mindset is also particularly tuned to marathons. I’m not someone who has incredibly strong responses to movies: I like seeing movies, and I like discussing movies, but you’ll rarely see me take a hard stance on whether I liked or disliked a particular film. This is not to say that I’m not critical of films (I can’t shut that off), but rather that I’m more likely to treat their consumption as a sort of cultural participation rather than evaluation. Seeing five movies in one day is the natural progression of losing an hour watching trailers on Apple.com, jumping from genre to genre in order to get a big-picture view of the cinematic landscape.

Admittedly, it’s a big-picture view of the big picture landscape, focused mainly on films with wide distribution, big marketing budgets, and big box office goals. That’s where my filmgoing tends to focus itself, both because it’s the kind of movie experience I grew up on and because it’s the type of movie I find most easy to participate with (not to mention the easiest films to find in multiplexes with cheap matinees). It’s also the type of experience that tends to play well in marathons, a lack of subtlety better opening up space to place the films within different cultural or industrial conversations.

That’s always my favorite part of these marathons, finding surprising—or sometimes just fun—connections between different movies overlapping in theatres. My day began with Monsters University and ended with The Heat, and I was struck by how similar they are in theme given how wildly different they can be in tone. Both films pair a by-the-books, socially awkward individual with their brash, confident counterpart; although Sulley is more popular than Melissa McCarthy’s Mullins (who is as equally maligned as Bullock’s Ashburn), and Monsters University is another Pixar film to feature an absence of gender as a meaningful component, the films nonetheless follow the structure of a “buddy comedy” to reveal different sides of their respective duos.

The two films are also a nice reminder of what Pixar does so well, even when they’re dealing with fairly predictable stories. The Heat’s greatest struggle is that—while I’d concur with Linda Holmes’ perspective on its gender commentary—it’s not a particularly interesting cop film, its drug storyline too often used as thin connective tissue from comic setup to comic setup. Because the setups are funny the film works, and it reaffirms my appreciation for both Sandra Bullock and Melissa McCarthy as performers, but the film is often blunt and sloppy when setting up its stakes. By comparison, while Monsters University is hardly breaking any ground with its college setting, there’s something about the Pixar details that give the mundane more momentum. The film still spends a lot of time coasting, but when the film gets down to business you end up feeling like the coasting was far more meaningful than it would—or should—inherently be. Pixar’s “franchise” films are often missing the same sense of wonder as their original works, but they’re good at using familiarity to their advantage, and this certainly offers a better path for non-Toy Story Pixar prequels/sequels than Cars 2 did. 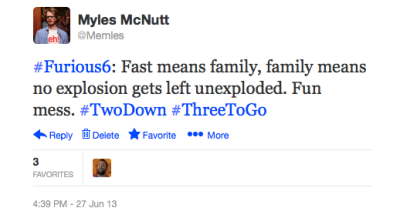 In choosing to see so many films aiming to appeal to mass audiences, familiarity is likely to be omnipresent, but I was surprised by how differently that familiarity could manifest. Fast and Furious 6 is a love letter to a franchise and its fans, indulging in the franchise’s now trademark ludicrous car-based action setpieces while simultaneously arguing for how important character—specifically the idea of Dom’s crew as “family”—has been to that franchise. As someone who’s only seen bits and pieces of the middle portion of the series—having only seen Fast Five and the first two films in their entirety—it was weird for the film to be so reverent to past events and characters that I had no real connection to. And yet within all the carnage, I came to admire the film’s desire to find the meaning in the familiar, to use repetition as a tool to make the weight of character deaths and character resurrections more substantial. I teared up at the end of a film that I wasn’t on the same wavelength on, and a film that I laughed incredulously toward on more than one occasion, having been made familiar in a way the film deserves credit for.

There’s no such transformative power in White House Down, but it’s another film that earns its familiarity. As plain a ripoff of Die Hard as you could imagine, the film doesn’t bother to introduce any dramatic twists nor does it offer any sort of wry commentary on the contained space action genre. Instead, it abandons all subtlety and delivers a film that simply fits together. It builds momentum where it needs to build momentum, finds its stakes in the most obvious of places, and delivers the kind of popcorn action film that you’ll gladly rewatch when it shows up on basic cable with its single PG-13 F-bomb dubbed over. We could call it an homage, or a throwback, or a revival, but it never feels particularly old or new, dated or current. It just ends up feeling in sync with itself, something that becomes more important when you’ve seen three movies immediately beforehand. As much as White House Down risks being too familiar, it also rarely—more on that below—exits that sweet spot where you have no reason to question the familiar as a filmmaking choice, a nice place to find yourself during the fourth movie of the day.

World War Z is a film so terrified of falling out of this sweet spot it never finds it. The film often feels familiar, tying into various worldwide disaster epics, tense action films, and everything else in between. But as much as it doesn’t bear the full weight of its apparent productions struggles in the finished product (which is an impressive feat), the film was streamlined in editing to the point where nothing—including its familiarity—can fully resonate. Perhaps it’s the fact it’s the one film I saw all day to involve little to no humor, but World War Z was difficult to connect with on a level larger than the immediate action taking place on screen. Its tight focus on Pitt’s character—never leaving his narrative to visit any other characters other than when they are in direct communication—means that our experience is meant to mirror his, each new scenario a new threat he has to solve. The various action setpieces are varied enough to keep the film moving (I particularly liked the atmosphere of the final act), but they’re also varied enough to keep the film from seeming like a cumulative experience: although various secondary characters are introduced to provide anchors for audience empathy, none are given enough time to become familiar to audiences.

When I left each movie, I sent a quick 140-character tweet with my reaction to the film (which have been scattered throughout the post). They tend to match up with the above impressions (I’m probably a bit higher on Monsters University than I was initially), as years of immediately writing about TV shows I watch has conditioned me to be quick with formulating impressions. Those tweets proved to be useful anchors in thinking about these movies, as it attempts to retain them as individual films rather than the overlapping experience they were. At the same time, though, I feel the films take on greater meaning as part of that overlapping experience. It’s likely I’ll revisit at least a few of these films in other contexts and find nuance I didn’t before, but my experience with The Heat was enriched—critics of the film could argue skewed—as a welcome dose of comedy shared with the friends who came willing to drive me home, proving a perfect end to the day. It’s not the way I’d want to see every movie, but it’s a fine way to create a memorable day of cultural participation.

One response to “The Familiar Five: Reflections on a Summer Movie Marathon”