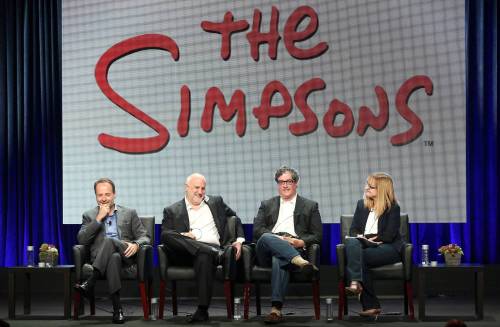 For FXX as a cable channel, the arrival of The Simpsons reruns—including a complete marathon of all 552 Simpsons episodes through season 25 starting on August 21—marks a key transition in its brand identity. But given that Simpsons reruns have been proliferate in syndication on local stations for years, and DVD box sets have allowed fans to revisit the most beloved episodes of the series whenever they’d like, the idea of being able to watch eight episodes of The Simpsons leading up to each new episode on Fox on Sunday nights is not necessarily a revelation for fans of the series.

For this reason, the bigger news out of last November’s cable syndication deal between FXX and The Simpsons was the non-linear rights. At the time, this was largely framed in terms of the most basic way we understand the meaning of “non-linear,” which is to say that the series will be available to stream at any time. If we take “linear” to mean a traditional programming schedule dictated by a network or channel, then we have historically understood “non-linear” to mean an environment where audiences can choose to watch a show on their own terms through either video on-demand (VOD) services through cable or satellite providers or streaming platforms like Netflix or Hulu. Accordingly, headlines at the time of the announcement focused on the fact “The Simpsons Will Finally Be Available To Stream” or that “Every ‘Simpsons’ Episode Will Be Available To Stream In August,” as The Simpsons finally became part of a new era of television distribution.

And yet as I wrote at the time, although not exactly in these terms, The Simpsons has always been non-linear as a cultural artifact.

How The Simpsons Should Exist On The Web – Slate

“We don’t think about The Simpsons in terms of episodes, not in our contemporary moment. While I will be happy to revisit various Simpsons episodes in their entirety on FXX or FXNow, and I will on occasion pull out my DVDs and watch a few episodes back-to-back, how we think of and use The Simpsons on a daily basis comes in the form of jokes, bits, and memorable sequences. The Simpsons travels in these bite-sized chunks, and the value of The Simpsons in the age of online streaming should ideally reflect this.”

This is why I specifically called for a Simpsons clip database that would embrace not simply non-linear forms of television distribution, but also non-linear patterns of cultural engagement with the text in question. FXX has been relatively tight-lipped regarding details of what their Simpsons app—which was originally planned to launch alongside the series’ debut on FXX, but will now begin rolling out in October—would look like, but in January FX president of program strategy Chuck Saftler expressed his excitement at what they had planned, but made no specific assurances when I pressed him on the potential for clips to be built into the system.

This lengthy preamble is my way of working through the fact that, as demoed for critics at FX’s day at the Television Critics Association press tour, the newly unveiled Simpsons World app has fully and wholly embraced the non-linear ways The Simpsons echoes in the lives of its fans. With multiple channels of pre-programmed episode streams, the ability to stream any episode, character pages featuring curated clips, and the capacity to read-along with the script while watching any episode, Simpsons World is everything a fan could want.

And with the proposed ability to create and share clips to a range of social networks, it is also the engine for the Simpsons Clip Database I dreamed of.

Simpsons World, as it was demoed for television critics, opens with a homepage that features a range of content designed to serve as a central portal for the app as a whole. Donuts serve as currency, which users will earn by meeting certain goals (watching 20 episodes was the example onscreen), and which they will use to unlock exclusive content. There are curated lists, similar to what you would see on a site like Buzzfeed. There are ads for licensed Simpsons products, including the recently released LEGO Simpsons house. And there are also links to the show’s Twitter accounts, to emphasize the existing online presence for the franchise. Although FX reiterates they don’t want to compete with Facebook, they still want to imagine a world where people use this as their homepage, and as a central hub for all things Simpsons.

This type of curated space is evident throughout the site: while a very clean interface for browsing every episode from every season was shown, a lot of the site’s focus is on creating spaces where that content can be engaged with. This includes an extended episode guide (likely comparable to the episode guides published in book form), the aforementioned character pages—where you can watch clips of all of Sideshow Bob’s attempted murders, for instance—and dynamic script view where you can watch an episode while a column on the right-hand side of the screen works through the script line-by-line. Although it does not appear the epic cast and crew commentary tracks are a part of the site (likely to avoid completely cannibalizing DVD sales), these features are designed to give people new ways of watching The Simpsons, and thus new ways of experiencing the text in both linear and non-linear forms.

But it is the ability to extend this experience beyond the personal and into the social that represents Simpsons World’s greatest accomplishment. As the presentation went on, there were various mentions of “clips” (my heart skipped a beat every time), and the app does feature a range of pre-made clips that are likely to cover many of the most memorable scenes in the show’s history. But they also particularly showcased the ability to create and share your own clips, which was demonstrated through a quote from “Cape Feare,” in which Sideshow Bob promises to send Bart to heaven before sending him to hell. While the actual mechanism of how to create a clip was not featured, and there appears to be the ability to create images with quotes in addition to clips, the process presented was a single click of a Share button (tied to one of multiple social networks) and then a link from which those who see the link can click and enjoy the clip in question.

The larger Simpsons World experience is trapped behind a cable authentication paywall: only those who subscribe to FX(X) through one of a selection of cable and satellite providers will have access to full episodes and the larger app experience, which currently makes up 60% of FX’s subscriber base. But Saftler promised during the panel that clips would not require authentication, which should allow them to spread across multiple social networks without running into challenges of access. Although the length of a clip will be somewhat limited (they likely can’t go beyond 5 minutes due to guild restrictions, for example), it definitely sounds as though the ability for a user to select and share a particular clip or scene from an episode as part of their day-to-day social network activity is far closer to being a reality than it was before the Simpsons World app existed.

There are, however, caveats. The first is that everything we saw was a prototype, a vision of what they want the site to be as opposed to what it’s likely to be when it goes live in October. It’s possible the ability to create and share clips may be part of a much later revision, meaning we could be a year or more away from The Simpsons being fully spreadable in the way the site seems built to offer. Moreover, any sharing must take place within the geographic borders of the United States of America: because FXX’s syndication rights only extend to the American audience, Simpsons World is not allowed to extend to the entire world, at least in its current incarnation. Could the platform be extended into a global subscription streaming service in other territories? It’s likely theoretically possible, but that’s a much more complicated conversation that extends well beyond FXX’s relationship to the property.

When FXX’s presentation began, I was skeptical that Simpsons World would live up to the early details I had gleaned in January. As FXX’s presentation continued, I continued to hold onto that skepticism, if only as a protection from the sense that on a conceptual and philosophical level, Simpsons World is built around providing the kind of non-linear Simpsons experience that I imagined. Since we are still short on specific technical details, I still have my moments of skepticism as it relates to how this will work technically, and whether it will offer the level of freedom that I imagined (like, for example, the ability to archive clips you’ve shared to use for future reference). But in its most formal unveiling yet, Simpsons World was almost exactly what I’d imagine it to be—even if it doesn’t quite live up to my imagination or the conceptual presentation made earlier today, it still promises to offer an incredible resource for fans to explore a series in an environment designed to replicate how that series has resonated in popular culture.

One response to “With FXX’s Simpsons World, A Clip Database Comes Closer to Non-Linear Reality”