Cultural Review: One Day At A Time turns a cynical instinct into a culturally-specific triumph

On Friday, Netflix debuts a new series from Norman Lear, but I don’t want to talk about either the streaming service or the iconic producer.

This is, admittedly, somewhat counterproductive. One Day At A Time is part of a growing collection of multi-camera projects for Netflix, and thus part of their larger programming narrative—the service continues to expand its profile in the TV industry seemingly every week, and its investment in this “traditional” genre is undoubtedly part of this. And as for Lear, my disinterest in discussing his involvement in this reboot of his 1975 sitcom is not meant as a slight on his legacy or his contributions to this series, which are all deserving of praise.

However, in both cases, I struggle overemphasizing these parties when discussing the myriad strengths of One Day At A Time, a show that thrives in its specificity despite being a product of a culture of reproduction. While Netflix will get kudos for distributing the series, and Lear deserves recognition for his pioneering of a sitcom model imagining television as what Newcomb and Hirsch dubbed “the cultural forum,” One Day At A Time succeeds because it finds purpose and meaning where none was guaranteed, or even likely.

The origins of the series, as presented by Vulture, can be read two ways:

When legendary sitcom producer Norman Lear kicked off the book tour for his 2014 memoir, Even This I Get to Experience, the head of production and development at his company, Act III Productions, had a thought. “I wanted to get him back into TV to show people how relevant he still is,” said Brent Miller, the Act III executive. “It’s something people miss.” The idea to revive one of Lear’s legacy properties — the 1975 CBS sitcom One Day at a Time — was floated, but with one crucial difference, driven by the results of a marketing survey showing that single Latina mothers are a desirable target demographic: This time, it would center on a Latino family.

The first way is to focus on Miller’s goal of bringing Lear—a television icon—back to the industry, a timely one given the debut of NBC’s The Carmichael Show and the increased focus of ABC’s Blackish into cultural issues during this same period. That goal is admirable, and no one would be upset at the idea of Lear coming back to television.

The second way, however, is to focus on Miller’s actual strategy. Instead of having Lear work on a new series, perhaps partnering with a young writer similar to Carmichael‘s Jerrod Carmichael to develop a new property, the immediate instinct is to remake one of his existing series. Moreover, the choice to focus on a Latino family wasn’t motivated by a perceived lack of representation: it was motivated by a marketing survey, chosen to make the concept more desirable to Sony (the studio that held the rights, and would go on to produce the show) and Netflix (the distributor who would eventually purchase it).

This is not, ideally, how creativity is supposed to work, although it’s typical in the television industry. There’s a suggestion here that Miller—perhaps from past experience—did not believe that an original project from Lear would find a home, and that’s unfortunate if true. But the idea that this had to exist as a reboot of an existing property, and that its focus on a Latino family originated with a marketing study, points to the television industry’s unwillingness to abandon traditional profit motives, even when creating something that can—and, considering the final product, should—be framed as a step forward for representations of Latino families on television, and even when Netflix theoretically should be able to function outside of those logics as a self-proclaimed “disruptor.”

And so the fact that One Day At A Time is a great and meaningful television show is in spite of—rather than as a result of—its origins. Some of this credit goes to Lear, certainly, but it has much more to do with those who came on to run the series managed to turn it into something far beyond what its origins required. There is a version of One Day At A Time that barely goes beyond its initial pitch, telling generic family sitcom stories but with Latino actors, and living up to its promise for Netflix (interested in targeting niche audiences as a subscription-based service) and, on a basic level, to Miller’s initial goal of reviving Lear’s production company. However, what debuts on Netflix Friday is far from generic, and it has everything to do with what happened after the show was initially conceived. 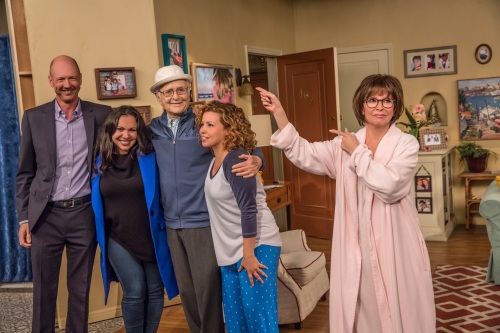 Norman Lear is a strong advocate for the importance of diverse voices in television, a champion of both The Carmichael Show and Blackish, but he is not the driving force behind what makes One Day At a Time work: there should be no review of One Day At A Time that mentions Lear without also mentioning Gloria Calderon Kellett, who was hired as co-showrunner with Mike Royce (who has an overall deal at Sony). The show thrives in its specificity of the Cuban-American experience, all of which is drawn from Calderon Kellett’s family history. There was no rule that the series needed a Latina showrunner, and it strikes me as unlikely that either Sony or Netflix would have balked if the suggestion had never been made. It was that decision—which, according to Vulture’s narrative, was Miller’s—that began the process of turning One Day At a Time into a show that bears few markers of its derivative origins, and credit goes to all involved for allowing Calderon Kellett’s investment in specificity to survive the various roadblocks that would be set up along the way (including, as she predicted, an executive at some point asking if the family could be Mexican instead of Cuban, presumably to expand its demographic appeal).

One Day At A Time tells the story of a single Latina mother, fulfilling the marketing survey’s goals, but the way it tells that story goes a few steps further. It is also the story of a veteran, struggling to recover from a battlefield injury and fighting with the programs designed to help those like her. Penelope, as brought to life by Justina Machado, carries a number of different struggles, equally weighted across her relationships with her children, her relationship with her mother, her career as a nurse, and her romantic relationships (most prominently with her estranged husband). She is never reduced to a single story, an acknowledgment that although many episodes of One Day At a Time tackle particular “issues” in detail, those issues never exist in isolation: they are weighed as Penelope also gets to make new friends, go on dates, and battle with idiot coworkers. Penelope Alvarez is never just one thing, and the series uses its expanded running time and its serialized structure to give Machado—who is tremendous here—a multi-faceted character who can comfortably banter in one moment and break down in the next.

On a very basic level, One Day At A Time earned my affection by committing to the notion of television as a space for discussion of important cultural issues—immigration, sexuality, affirmative action, and more come up in the first season, and create some valuable commentary that I intend to use this semester as examples in my television studies classroom. However, what makes it work so well is how quickly the show establishes a family dynamic that serves these goals: Rita Moreno is very funny as Penelope’s mother, but the show efficiently establishes the depth beneath the performativity, and gives Moreno some tremendous material as the season goes on. Elena, Penelope’s daughter, is quickly established as a feminist, but the show doesn’t just use her views as a counterpoint, instead exploring her identity in greater detail. And while teenage son Alex is less complicated, the show does a nice job of bringing him into more complex stories where it’s valuable, and taking note of how his own nascent worldview would be shaped by the debates and comings-of-age happening around him.

But even as the show’s focus shifts from issue to issue, it never forgets that it’s about a Cuban-American family: their background doesn’t just inflect these stories, instead informing them on a fundamental level. The show plays fast-and-loose with heavy accents in the case of Moreno’s character, but for the most part it blends English and Spanish naturally, and the characters perform their Cuban heritage organically, without falling into the trap of feeling too much like exposition for ignorant white audiences. Interviews and features in advance of the show’s premiere have emphasized the universality—or “relatability”—of this story for those who may not be Cuban, and while I loathe the notion that this should be the goal of any series I agree with the essence of that statement: you do not need to be Cuban to feel for the Alvarez family, but it’s important to note that part of why you care about them is because they are Cuban, and that specificity informs them in ways that make them distinct from the other TV families that might have gone through similar issues. They feel strikingly real, and the show balances the rhythms of the sitcom with heavier drama in ways that prove the flexibility of a format that modern viewers—and my students, who despise any and all contemporary modern camera shows—increasingly see as more limited than it actually is.

The charms of One Day At A Time are the product of a collaborative process, as Calderon Kellett and Royce developed a show that speaks to Lear’s legacy while also embracing modern storytelling conventions and clever—and productive—format variations. The actual idea of rebooting a classic 70s sitcom and swapping the race of the lead characters to leverage lucrative underserved demographics is not in and of itself a progressive act, but the show invests in this decision in ways that turn the show into a crucial glimpse into not just a “Latino” family, but a Cuban-American family. For each of the issues it takes on, it makes similar investments, mining authenticity from each character’s journey even when those journeys are often driven by stock sitcom storytelling (as in the case of manchild landlord Schneider, or Penelope’s oft-clueless boss Dr. Berkowitz). While the season doesn’t necessarily end in a cliffhanger, it demands continuation if only because I want to see more of this family, both as a conduit for larger issues and as a specific set of futures I need to see unfold.

While I’m appreciative of Netflix for letting One Day At A Time evolve into this show, let’s not kid ourselves: they would have probably settled for a stock family sitcom that they could market to Latino subscribers. And while Lear’s guidance was undoubtedly a huge part of the process, it seems like a mistake to overemphasize his involvement in a show that derives its best qualities from a Latina showrunner using her personal experiences to find the truths in Lear’s format. Rather than standing as a testament to Netflix’s partnership with an iconic producer, One Day At A Time is a testament to prioritizing specificity and authenticity in telling stories about marginalized groups, and of the joy and pain and warmth that emerges when talented performers bring those stories to life in a format befitting them.

Filed under One Day At A Time

3 responses to “Cultural Review: One Day At A Time turns a cynical instinct into a culturally-specific triumph”