In a post last week, I explored the somewhat unclear approach that Skam has taken to its hiatuses in the past three seasons. Some have argued that time passes in the show as it did in real life during these breaks, but others have suggested the gap in time is simply ignored. There is no definitive answer to speak of here, and so the conclusion is that it has been left ambiguous: you can either read the missing time into the narrative or you can presume the show is picking up more or less where it left off. (I’ve seen both positions defended very aggressively).

However, regardless, it is safe to say that viewers had to wait a week between episodes, and spent that week pondering the events from the karaoke party. What happened with the fight? How did Noora and Yousef end up hooking up? What’s the full story behind the Pepsi Max girls’ efforts to push Sana out of the bus? The hiatus forced us to sit with these questions, think about our own reactions to them, and wonder how Sana would react when the show returned.

And then the show returned, and it spent an entire week on Sana sitting with these questions, thinking about her reactions to them, and then deciding how to react.

The result is an episode that is well executed in the abstract, but seems poorly calibrated to the reality of the preceding hiatus.

Like all of the show’s characters, Sana is responding to trauma by isolating herself, and not explaining her reasoning to anyone. When she gets to school on Monday, she’s already left the bus to the surprise of her friends, but explains it away as a general objection instead of a reaction to Sara’s plan to oust her. Each clip gives her a chance to say something, but it’s clear that Sana doesn’t really have anyone to talk to about this. She thinks that her friends have been poisoned against her, and her mother has no idea she was even in a bus group to begin with, meaning she is seemingly without a lifeline. Isak appears as a possible option in Wednesday’s clip, but when they get together on Friday it’s clear that Sana has no intention of opening up to him. She is going to handle this herself, a decision that we see her agonizing with as the episode progresses.

There are three key scenes where we see this play out, as we move into an observational mode. When we see Sana in her family’s kitchen, we get a wordless exchange between Sana and Yousef, where neither says a single word to the other. It’s clear that Sana is icing out her brother and his friends in general—as evidenced by the chat from later in the week—but this is particularly true of Yousef, and both seem to understand that something went down. You spend the scene hoping that one will ask to talk to the other, but it’s clear neither of them necessarily have the vocabulary to do so. We see something similar in Thursday’s episode, as Sana watches the Facebook conversation unfold about her departure from the bus and hastily types out a reply she doesn’t send. She knows that sending it would force a reckoning of sorts, and you can sense her hesitation at approaching all of these problems in this way (see also: her evasion of Noora’s messages).

The challenge is that as the audience, we’ve had a week to work through what Sana is working through, and it’s inherently—if not unproductively—frustrating to be forced to experience the story through the eyes of someone fundamentally unwilling to do the detective work the audience wants her to do. It’s a compelling narrative device in the abstract, as it heightens the audience’s sense of anticipation: we saw something similar when Noora was keeping her incident with William’s brother a secret, and you spent every scene waiting to see if this was going to be the moment that Noora finally said something. By the end of this week’s clips, I was in a similar headspace, watching as Sana helps Isak prepare for the biology test while seemingly—if we follow the logic of Isak’s exposition about his therapist-like relationship with Sara—pondering opening up to him. There’s immense power in the way the story can invest us in such small moments, where a seemingly mundane scene feels like it can be transformed with a few words at any time. And when it’s revealed that Sana only agreed to study with Isak in order to spy into his Facebook to uncover evidence of Sara’s dislike of Vilde, we get to experience the tension of this observation as Sana agonizes over whether or not she’s willing to be the kind of person who does such a thing.

It all works until you remember that the audience spent a week sitting and observing right beforehand. For those who might eventually binge their way through season four, I think this week will represent an effective narrative delay, forcing us to get further into Sana’s headspace and understand how her isolation—a byproduct of her religion marking her as “other” regardless of how much she worked to emphasize her desire to be a part of both Russ and a potential relationship with Yousef—shapes her reaction to the events at the karaoke party. But during the hiatus the audience already experienced a narrative delay, and most likely presumed Sana was isolating herself during that period. To see that play out creates some productive scenes, but it also offers none of the resolution that the hiatus discussion naturally revolved around. It can be effective to dangle a carrot—this season does love its carrots—just out of reach as a way of motivating the audience, but it becomes less effective when you do it right before a hiatus and come back with more carrots on more sticks. 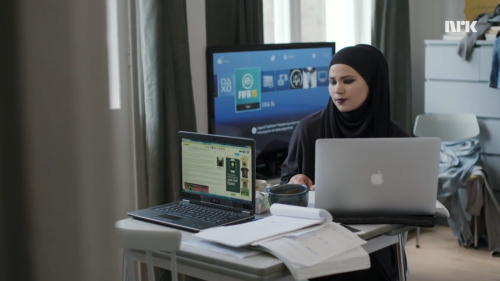 It’s frustrating because out of context today’s final clip is a masterpiece of suspense. First we’re waiting to see if Sana will reach out to Isak, but then things start to get suspicious when she asks him to log into Facebook, and then we see her true motives when he leaves to make tea (or, well, whatever he thinks making tea is). After that, we wait to see how she wants to play this out, but it’s suddenly Isak who makes a move and asks her about her past with Even. The resulting conversation doesn’t get us any closer to the truth about Even’s past with Elias’ friend group, but it ends with Isak telling Sana that she’s a good person, and thus she spends the rest of the scene pondering the morality of her actions.When Isak leaves to do laundry, we sit on a single shot of Sana agonizing over her decision for a full twenty-four seconds, but it seemed like closer to a minute in the moment. 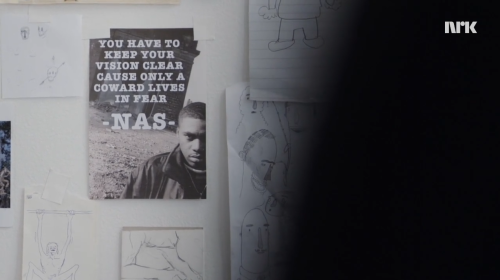 As she snoops through Isak’s messages, it’s a low point for the character’s morality, but the way she draws inspiration from Nas suggests that it is on some level a triumphant moment for Sana from her own perspective. The use of the poster implies that Sana believes it would be cowardly to simply let Sara “win” and back away from this situation, but isn’t it also cowardly to break into Isak’s Facebook instead of asking him for his help, or by collecting evidence rather than talking to Vilde about the situation? It’s a refreshing reminder of how flawed Skam allows its characters to be, and how it can use that to fuel larger conversations (here fueled both by Sana’s direct relationship with her friends and her relationship with Islam).

But while all of this is satisfying in some ways, the idea that we still have no answers to the questions set up two weeks ago is disorienting. Whether it’s in the throwaway mentions of apologies—to Isak from Sana and to Sana from Elias—for the fight to Noora’s oblique mention of “good news” that Sana interprets to be about Yousef (my money’s on her having talked to William, for what it’s worth), the show is still teasing us with what the hiatus inherently teased us about, and it is difficult to focus on the work it’s doing well when it seems to be ignoring the work it had implicitly promised to do. If this episode had aired before the hiatus, I think I would have found it easier to embrace its approach of isolation and narrative delay: as it stands, the frustration bubbled to the surface a bit too readily as the week wore on, and kept the whole affair from landing in the way it could have.