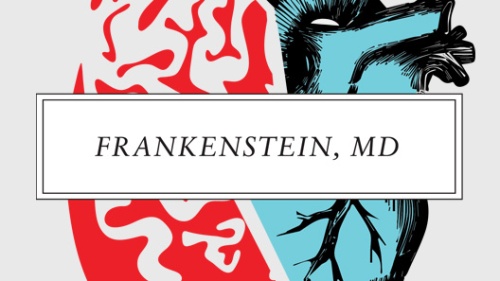 On the one hand, Frankenstein M.D. is very familiar: the third full series from Pemberley Digital following the Emmy-winning The Lizzie Bennett Diaries and followup Emma Approved, the series is a webseries adaptation of a classic novel featuring a female protagonist (in this case reimagining Victor Frankenstein as Victoria). Fans of their previous series will find both a similar sense of humor and a similar sense of purpose when the series debuts its first three episodes tomorrow, with the series settling into a familiar Tuesday-Friday pattern until its finale on Halloween.

On the other hand, though, Frankenstein M.D. is a departure in two keys ways. The first is that, by departing from Austen and arriving at Mary Shelley, Pemberley is heading into new generic territory, balancing its direct address vlog style with the well-known results of Dr. Frankenstein’s experiments. However, the second—and I would argue more substantial—difference is that they’re working with a traditional “network,” partnering with PBS Digital Studios in launching the series. In the first part of this wide-ranging interview with executive producer Bernie Su, star Anna Lore (Victoria Frankenstein), and PBS Digital Studios senior director Matthew Graham, they discuss the development of a series that one might classify as an experiment for all parties. Part Two of the interview explores the industrial side of the series’ debut in greater detail.

Cultural Learnings: From a PBS Digital Studios perspective, this is the first time you’ve developed a fictional webseries of this kind—what drew you to Pemberley Digital as a partner for this milestone?

PBS Digital Studios senior director Matthew Graham: What was great was that they had this amazing track record, and the qualities of Lizzie Bennet and Emma Approved that we really look for: audience engagement, smart content that’s innovative and totally different from anything else you see out there, etc. It’s unique, and it appeals to the kind of person that is drawn to PBS, and a big push behind Digital Studios is reaching those 13-34 year-olds that are on YouTube and consuming lots of content. And Bernie’s a great guy. [Laughter]

From your perspective, Bernie, were your discussions with PBS always centered on Frankenstein? Were there other projects considered for this partnership?

Executive Producer Bernie Su: It was “How about Frankenstein? Let’s do that!” It was literally that. It never got past it. I don’t think we even mentioned a second project. It was like “That’s great. What would be your take on that?” And then it was the idea of the modern medical student and how we can touch upon modern science and how we’re actually close scientifically to doing stuff—bringing people back to life, what is life, all that stuff—that Frankenstein does in the novel. So it made a lot of sense given that our audience has been wanting us to push toward STEM, so this was just a great opportunity that seemed like a really good match right out of the gate and it was really easy.

END_OF_DOCUMENT_TOKEN_TO_BE_REPLACED

Technically speaking, Pemberley Digital’s relationship with PBS Digital Studios is not that dissimilar to their relationship with DECA, or with any other Multi-channel Network operating in the space of web video (specifically YouTube). When Frankenstein, M.D. launches on August 19 with three episodes, beginning a 24-episode run that those videos will live on YouTube through a range of different channels, and follow the Tuesday/Friday distribution model that fans of Pemberley Digital’s The Lizzie Bennet Diaries (which I’ve written about here and here) and Emma Approved will be familiar with.

At the same time, though, PBS is the first major “network” that Pemberley Digital has partnered with, in the sense that it expands beyond the digital space and into the realm of traditional television. Whereas I imagine most audiences of even The Lizzie Bennet Diaries and Emma Approved couldn’t describe what DECA is or what it does, PBS is a known brand entity, with certain expectations and a place within cultural discourse. It is also a public broadcaster, with public interest mandates distinct from DECA, and which have never been connected to scripted web content on this level previously.

I spoke with PBS Digital Studios senior director Matt Graham, Pemberley Digital producer Bernie Su, and series star Anna Lore (who plays Victoria Franktenstein) about Frankenstein, M.D. earlier today, and I’ll be posting that interview before the August 19 launch. In the meantime, though, here’s what we know about the webseries.

Update: The footage screened was pulled from multiple episodes. It features Victoria welcoming the audience to Frankenstein, M.D. (suggesting the name of the webseries is also the name of the in-world YouTube series), and then shifts to a scene featuring Iggy hooking himself up to some sort of electrocution device. The tone is fairly comic (Iggy reminds Victoria they’re not officially doctors yet, before electrocuting himself), although the subsequent scene between Victoria and Dr. Waldman is more plot-driven, as she focuses on another Doctor who sounds like a beacon of misogyny.

Notably, for existing Pemberley Digital fans, the format is also shifting once more—there is slightly more of a sitcom-style filming energy, in which direct address is paired with a more dynamic camera style that takes an entirely different angle (versus the “second camera” that Emma Approve has used to occasionally get a second perspective).