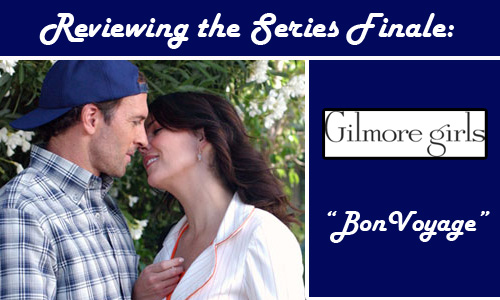 I think we all had our doubts: Gilmore Girls was a show that was left in tatters just a season ago, and it has spent the last 21 episodes picking up the pieces. And then, at the last moment, the series apparently had the rug pulled out from under it when an attempt to gain an 8th season fell apart. Expectations couldn’t help but be low: a show past its prime, on its last legs, throwing together what was supposed to be a season finale that was suddenly the end of the road for the entire series. The verdict is in: while it might not be the finale we wish we’d gotten in a perfect world, David S. Rosenthal has delivered an absolute best case scenario. “Bon Voyage” was a finale with style, grace, and an understanding of how these characters tick. It wasn’t perfect, but it was the best we were going to get, and a proper sendoff for the girls Gilmore.

There were certain things which felt a little forced, such as Christiane Amanpour’s cameo in the cold open, however the rest of the episode was subtle and meaningful. Rory is sent into a tailspin when she’s offered an unbelievable opportunity working on the campaign trail of one Barack Obama, and Lorelai steps into ultimate “Mom” mode with lists, shampoo bottles (Mini, not big) and fanny packs. The entire episode, up until the very end, is spent with these two riffing off one another, neither discussing the fact that their last months together (A Rollercoaster excursion was planned) had turned into just two days. The irony of the situation, as it parallels our own disappointment at losing a future season and ending up with only two episodes, is not lost on the creators, nor its audience.

Most importantly, the producers kept these two girls together. This episode was about Rory and Lorelai, which is why the lack of Logan is for the best. While I think he was an important part of Rory’s life, this really needed to be her own journey with her mother, her own moment of independence. And, really, the episode basically nailed it. Her panic at the thought of being alone, her realization of her mother’s own emotions; it all played out in a very subtle fashion, developing slowly until the final moment in which everything came to a close.

That close, however, did not come just through introspection but through a grand gesture. As The Elder points out, and he’s right to do so, what Rosenthal did so well was establishing Luke and Lorelai’s reconciliation (Which we knew was coming, but was still powerful stuff) without having to break up the mother/daughter time. Luke’s personal sacrifice was more than enough to prove to Lorelai his true feelings, and the result was a reunion which didn’t take away from the relationship between our titular heroines. Sure, I think that the shippers are likely to be left wanting more, but I personally think that the single kiss and the necklace do a lot of talking with a little screen time. That’s a testament to Rosenthal’s subtle touch within this episode.

However, I must applaud Rosenthal for his absolutely fantastic handling of the element I was most worried with: the resolution of Lorelai’s relationship with her parents. We got our first taste of Friday Night Dinner in a while, and Emily’s insistence as to the Spa renovation seemed like normal Emily. However, over time, it became clear that she had a motive: she didn’t want to lose contact with her daughter again. Their relationship had been based entirely on Rory in the early years as she went off to Chilton on their dime, and Emily doesn’t want Rory’s departure to mean the end of their time together. It was heartfelt, wonderfully acted, and just freakin’ perfect. Knowing that the wonderful Emily Bishop and Edward Herrmann will be going out on a song and emotionally heartfelt speeches to their daughter and granddaughter makes me extremely pleased.

And yet, as Emily herself said to Lorelai, the episode also managed to be a testament to Lorelai and Rory’s relationship to the people of Stars Hollow. These people adore Rory, adopting her as their own since she was little, and everything was on target: Kirk the DJ (We could have used some scratching, though, but there’s only so much time), Taylor the insane man, Miss Patty, Babette, Gypsy, Lulu…for whatever reason, everything felt on target with where things should have been with them. This was especially the case in providing Lane and Rory a chance to actually be best friends again, something that has been often missing. These people are real to me. I can only imagine them now frozen in time, with all their quirks intact, and their wackiness ensuing. Watching as they ran across the town square with those tables just reminded me how much I’ll miss their antics.

I don’t see how they didn’t have a pretty good idea this was going to be the series finale. The episode ended where the credits do in a scene straight out of the Pilot: Lorelai and Rory, sitting in Luke’s diner with no one else but Luke behind the counter, their relationship frozen in time to be remembered. Part of me will always want to thaw them out in a few months when I go through withdrawl, but I think I’m more content than I ever thought I’d be. It was an emotional finale, dealing with an important moment in all of their lives…and they came through it. In the face of change, Lorelai and Rory Gilmore found that they have friends and family who care about them, friends and family who will make sure they remain happy. And in the end, I don’t think we could ask for a better happy ending if an ending was our only choice.

Bon Voyage, Gilmore Girls. We followed where you led, and enjoyed the ride while it lasted.