Review: Harry Potter and the Order of the Phoenix 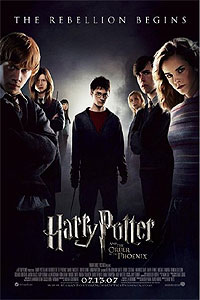 J.K. Rowling has yet to write a perfect novel. While she still has a chance with next week’s release of Deathly Hallows, she has yet to craft a literary masterpiece that lacks a single plot hole, inconsistency or highly illogical subplot regarding a textbook. And so it is that the directors taking on the task of adapting these books need to keep in mind that the text placed in front of them is, well, perhaps a little bit flawed.

David Yates, I feel, is the first to look at one of these stories as a recipe, not a rule book. While even Alfonso Cuaron developed a fantasy film rich with wonder and sorcery, although in his own unique style, Yates is the perfect director for embracing the series’ turn for the darker and more mature in Harry Potter and the Order of the Phoenix. He sticks to the basic ingredients, but presents them in a more traditional, not fantastical, fashion. The result is a film that feels perhaps less stunning as Cuaron’s film, but at the same time feels more grounded in a reality, as opposed to a fantasy world.

This is all a very good leap forward for the series, but Yates and screenwriter Michael Goldenberg have one distinct problem: The Order of the Phoenix is, of course, not a perfect novel. Rowling’s characters more stumble into early adulthood as opposed to grow naturally into it, and the novel’s greatest flaw (The transition into its climax) rears its ugly head. Yates manages to fix some of the book’s problems, but he can’t fix that final one.

The result is a film that, much like the book, signals a change. Order, as a book, featured some strong writing and some brilliant scenesetting from Rowling; similarly, Yates delivers some stunning imagery and a strong sense of thematic timing for a TV director. The problem is that, even as the technical or other elements improve, Order is still an awkward story that will never be perfect. And that, inevitably, makes Order a good, but not great, piece of filmmaking.

The film did, however, fix one major problem from the book: Emo Harry. It was perhaps the most frustrating thing about Order as a whole, Harry’s behaviour. It all makes sense, in context: as Dumbledore shuts Harry out, and as things start to go wrong all around him, he reacts as most teenagers would do…except he went a little far. Harry became downright whiny, and it made it hard to empathize with his position as “The Boy Who Lies”.

In the film, Yates and Daniel Radcliffe have crafted a likable and downright engaging Harry who we can relate to. Rather than focusing on his angst, we see instead his insecurity. He has his one outburst, a fantastic one, and after that point it is more internal than it is external. As the film is not forced to constantly be inside Harry’s thoughts for narrative purposes, we are able to see subtle hints as to Harry’s trauma, a marked improvement.

Also improved for the film is the entire sense of authoritarianism, although I think it could have been hammered home a little bit more. Imelda Staunton is perfect as Dolores Umbridge, whose takeover of Hogwarts is swift and rather well executed in cinematic form. As the Ministry begins to ramp up its attempts to hide the truth, Harry is forced to form Dumbledore’s Army. It’s your standard fighting against “The Man”, and I only wish we’d had a bit more of a presence for Fudge, as Umbridge seemed to be acting more on her own accord than as his representative, which made it a little less authoritarian in nature.

However, this brings me to the biggest problem that the book has: the climax, while incredibly emotionally impactful for reasons of character drama and Harry’s own personal trauma, is separate from the rest of the story. When Umbridge gets her comeuppance in the forest, and Harry and Co. are suddenly off to London, the entire first section of the film (Plot-wise) becomes irrelevant. It all happens too quickly in the book, and this is made even worse in the film as it all passes by within seconds.

In the novel, Umbridge as a character received a decent send-off with the attacks of the disgruntled Centaurs. In the case of Yates’ film, the centaurs are barely mentioned before they take out Umbridge. Without an appearance by replacement Divination teacher Firenze (A Centaur), the storyline lacks any sort of resonance and seems like a cheap cop-out. She is the film’s centerpiece, this source of so much oppression, and then she basically just gets dragged off into the sunset and the story moves on as if she never mattered.

It isn’t Yates’ fault: I don’t think there was actually a way to fix the transition. But it’s one of those things that Rowling was able to live up to and somewhat earn through an array of small details and character developments; a movie can never match that. And, smartly, it doesn’t try to: it drops Neville from the prophecy, it marginalizes Kreacher, and it keeps the confusion to a minimum.

From this point forward, these films will only become more and more complicated: Rowling is writing more complex stories that will require some serious attention from these filmmakers. David Yates proved here that he has an eye for taking an imperfect novel and emerging with something distinctly watchable and engaging, if not entirely fixing the mistakes of his source material. I hated Half-Blood Prince, but I think that Yates (Who is returning to direct) might have the right eye for the material: while he might not have been able to fix the transition in Order, he did manage to iron out its kinks. And that’s really what HBP is in desperate need of.

The end verdict: this is an intensely watchable film that handles itself with style and, most importantly, a sense of purpose. It could have been more than this, I don’t doubt this, but it was nonetheless a worthy adaptation of an imperfect piece of literature.

2 responses to “Review: Harry Potter and the Order of the Phoenix”