An Act of Desperation: 24 and the Resurrection of Tony Almeida 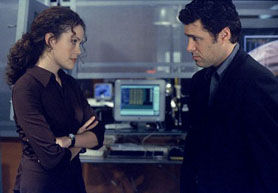 Normally, I would be remiss to place an unmarked spoiler directly within my thread title; I count myself amongst those who universally despise spoilers, and would love to attempt to keep this a secret. However, the producers of 24 and FOX don’t want to keep a secret: they want the whole world to know that they’re bringing beloved Tony Almeida (Carlos Bernard, pictured with still dead Michelle) back from near-certain death for the show’s seventh season in January.

Although one could certainly make an argument that this resurrection (Which opens up more plot holes than I’d care to imagine) signifies the moment at which 24 jumped the proverbial shark, I would contend that this is nothing compared to the larger problem: a show built on surprising its audience, 24 has taken a potentially shocking revelation and turned it into a talking point.

Ignoring for a second the rewriting of Season Five’s terrible end to Tony’s life (“No silent countdown” isn’t a logical justification) itself, the fact that this news has been plastered over every entertainment site in the land is the bigger problem. 24 used to be known for its shocking twists, those moments where everything got turned upside down; whether it was the return of a character, or a major death amongst the show’s cast, it felt as if 24 was always trying to surprise you.

Executive Producer Howard Gordon spoke to Zap2it.com about the storyline, and had this to say:

“So in the nine lives of Tony Almeida, this is just another chapter, hopefully the most interesting of them.” Without spilling the beans about the details, Gordon says, “It’s not the what of it, but the how, that’s interesting.”

I couldn’t help but laugh at this, and not just because they’re equating Tony Almeida to a cat: they already ruined the “what” with all this press, so of course it’s the how that’s more interesting! I know that we live in an age where the internet ruins casting spoilers all the time, but at least those of us who wish to avoid them can do so.

What I find most interesting is that the “Why” hasn’t come into this, and this is largely due to a simple fact: 24 is in need of some serious help. After a very rough sixth season, and some production issues in its seventh, they need something to drag these viewers back into the fold. And, who better than Tony to bring back jaded fans?

But in doing so, 24 is forfeiting its core selling point: its unpredictability. Even if it has waned over the years, watching Jack get into highly improbable situations and wondering how the show is going to contrive its way out of them is half the fun. And now that’s being thrown out the window in favour of early season fan service.

How effective will it be? No one knows for now, although they’re clearly hoping to steal some of Heroes’ thunder, as that particular series debuts this week. If I were Gordon and Co., I’d be crossing my fingers for Heroes fans to turn on that show, and perhaps come running back with promises of Tony alive and well.

2 responses to “An Act of Desperation: 24 and the Resurrection of Tony Almeida”