The Apple iPad: Still Not a Television, But That’s Okay 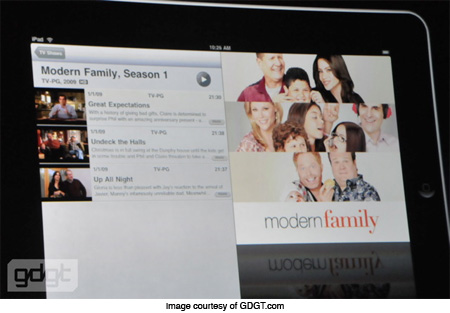 The Apple iPad is not a television, but it wants to be one.

Of course, you could say the same thing about the iPod, and the iPhone, and the Macbook, and the iMac, and the AppleTV (Which is, of course, a small media player that hooks up to your TV as opposed to an actual television). The fact of the matter is that nearly every Apple product, by nature of its connection with iTunes TV downloads, wants to position itself as a replacement for your television (or your cable box). And the iPad, you could argue, is the closest the company has come so far to creating a device that bridges the gap: with a 10″ screen and wireless portability, the device offers respectable size and versatility to be able to sit on the train, download last night’s episode of Glee, and enjoy the ride.

However, the question on my mind is whether the iPad is anything more than a large iPod, and whether the problem plaguing efforts to expand television viewing en masse towards other platforms has nothing to do with size or usability and more due to habit (or problems with the distribution model as a whole). I think there’s a compelling argument that the iPad could offer new ways for people to experience the internet (especially its news capacities) “on-the-go,” and I think positioning the machine as a more portable, more usable netbook is intelligent. However, in terms of the medium I tend to spend the most time with, I don’t know if the iPad would actually change how I want to experience television, even if its price point means that I might end up purchasing one eventually.

I’m no tech writer, but some TV-specific thoughts after the jump.

If there is a single argument to be made in terms of how people will experience episodic narrative with the iPad, I believe that shows which are only distributed online (like, for example, The Guild) are the only ones who may directly benefit from the device. The idea that such online programming could be made easily available as part of an early morning commute, or taken on the go and watched in a coffee shop, is creating more circumstances where people might be drawn towards that type of content. Not everyone owns a laptop, or more accurately may not carry it with them, and the idea of a substantial device that could access that type of online video content without technological hurdles does give online series another potential audience.

But if I consider its application for “normal” series, I just don’t see any sense that this device could change how we experience them. Yes, the screen is bigger, but part of what made television on the iPod Touch or iPhone convenient was that you already had the device with you, and it was small: you sacrificed in terms of size and resolution, certainly, but you gained at least some of that back in terms of feeling like you had it in the palm of your hand. The iPad, meanwhile, sits at that awkward inbetween point: not quite as portable as an iPhone, not quite as sharp or large as your television (or computer) screen, and not substantially different from either experience. There’s a novelty for taking the previous night’s episode on the go and having a large screen to watch it on, but I don’t necessarily know if that additional size is going to create a fundamentally different experience than what Apple’s other products currently offer.

[The one difference, as Kath points out on Twitter, is that the iPad could potentially access Hulu, which would be a bigger deal so long as Hulu’s subscription plans don’t place too high a financial barrier. However, that’s unconfirmed, and seems as if it would put a real dent on Apple’s TV episode sales.]

The iPad has great potential in terms of how people experience newspapers (the New York Times app is pretty stunning), and media as a whole will be hugely benefitted by the machine in the sense that it laps the OS on the iPhone and seems capable of far more than any netbook (especially in connecting with wireless networks as opposed to just Wi-Fi). Plus, with 10 hours of battery life, there’s no question that the machine will more or less destroy any chance that Amazon ever had of making the Kindle a cross-over success, considering that the iPad intends to be an extensive e-book reader as well. However, while the internet is a function driven around usability, television is not, so outside of providing another way to view the same television we’d watch in some other medium the “revolution” that many are considering the iPad won’t really take place.

There’s open questions about whether the device could become so widespread that more people would consider watching television shows, as they would be part of the overall multimedia experience. And it’s true: as someone with limited interest going into the event, word of the device’s wide-range of functions (gaming, web browsing, e-book reader, media player, email, etc.) does make me more likely (especially considering the relatively low price tag of $499 for the base model) to purchase the device, and more likely to engage with things (like e-books, for example) that I might not have with an iPhone or similar device. And with Apps able to change how people view baseball games (with instant access to stats and the like), or how they experience reading a newspaper, there is every chance that this thing could change certain individuals’ habits (but not, of course, their lives).

But outside of perhaps convincing a few people to give a show a try in a different setting, the iPad is as much of a television as the iPhone is, which means that Apple’s going to have to actually make a television before they manage to replace the thing (or at least have shows available to download instantaneously as opposed to waiting until the next morning).

5 responses to “The Apple iPad: Still Not a Television, But That’s Okay”