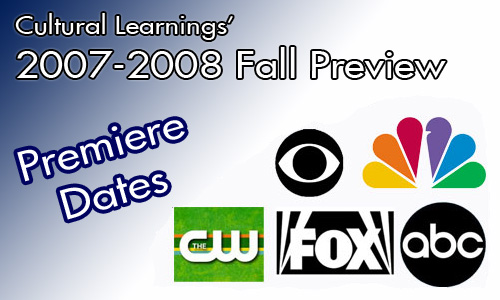 This fall, all of your favourite shows will be returning, and some new blood will join the pack. Which nights should you be scheduling off? Here’s the full calendar list of premiere dates for the Big 5 Networks.

Are You Smarter Than a 5th Grader [FOX]

America’s Next Top Model [The CW]

Back To You [FOX]

King of the Hill [FOX]

How I Met Your Mother [CBS]

Dancing with the Stars [ABC]

Two and a Half Men [CBS]

Dancing with the Stars (Results) [ABC]

Deal or No Deal [NBC]

My Name is Earl [NBC]

Without a Trace [CBS]

Deal of No Deal [NBC]

Everybody Hates Chris [The CW]

Aliens in America [The CW]

The Game [The CW] 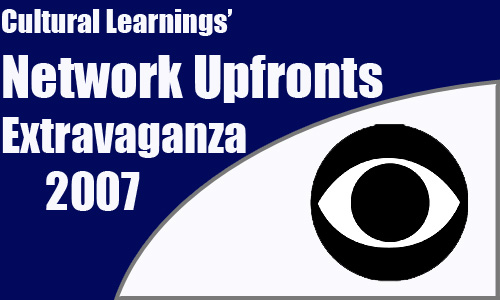 CBS has gone with what, for them, likely seems to be a rather risky lineup (Variety). However, the thing for CBS is that their idea of taking a risk is taking two Tylenol instead of one: it’s just a little dangerous, but there’s still no chance of anything negative happening.

CBS launches with a lineup which, despite new entries, seems awfully familiar. It is still anchored by three CSIs, it’s still got a large assortment of procedural crime dramas, and it still has a dose of reality where it counts. It is for this reason that any risk they take is really not risky at all: as soon as one of their new shows fails, they’ll just plop in a CSI rerun and wait until the next series is ready to go. This is the way CBS operates.

Cane – A Latin-American family, led by Jimmy Smits, enters into the alcohol business. It still sounds a lot like ABC’s Brothers & Sisters in Latino form, but with Smits at the helm the show carries gravitas. It’s not a huge risk for CBS at all, except that they’ve had trouble with such shows in the past. It’s a serial drama, and the network has nothing but procedurals at the moment (No, seriously, look at the lineup if you think I’m lying. Every single returning drama is a procedural drama.) Still, they’ve got to start being successful with serials at some point, and Cane has a shot.

Competition: Tough, with Boston Legal and Law and Order: Special Victims Unit to contend with.

Swingtown – A drama about the swinging lives of various romantic couplings, it’s both raunchier and less procedural than anything else in CBS’ lineup. This is an attempt to get a Desperate Housewives-style hit for the network, and I don’t think it will prove successful. The show has potential, but it just seems to be trying too hard to be THAT show. You know, the one the Parents’ groups get all uppity about. As a result, I worry about it becoming self-conscious, and losing any creative edge it perhaps had.

Competition: We don’t know yet, but I don’t think it bodes well for the drama. It could be asked to slot in early should Cane falter in its tough slot, and that’s asking the drama to rush itself…and that would be disastrous for this particular show.

Viva Laughlin – A musical-comedy-crime drama surroundinga man who wants to open a casino in Laughlin, Nevada. I don’t really know what to think about this one: it’s a bizarre coupling, and with Hugh Jackman as producer it is certainly a unique experience. I would have more faith in the series if likely jobless Veronica Mars creator Rob Thomas was coming on as showrunner as rumoured, but that appears to be off the table. For me, the show needs to prove that its construct is a good one, and can’t just rely on being quirky to succeed. I think that’s a tough job for a show on a network where simple = successful.

Competition: Tough. Extreme Makeover: Home Edition is never an easy show to beat, and it has to hope to compete with Sunday Night Football for its audience.

Moonlight – A vampire private investigator who, well, investigates supernatural happenings in a procedural fashion. The show is a likely companion for Ghost Whisperer on Fridays, and perhaps has the best chance of succeeding since it’s basically “Generic CBS Procedural + Vampires”. I think it will be a far cry from shows like Buffy or Angel which actually dealt with the true supernatural elements of their stories and created mythologies…Moonlight just wants to masquerade as such a drama to make it stand out within a crowd, which does little to interest me.

Competition: Weak. Moonlight has a good shot at continuing CBS’ dominance of the night with only ABC’s weak Girls Murder Club and NBC’s Las Vegas to worry about.

Big Bang Theory – A comedy from Two and a Half Men producer Chuck Lorre, this sitcom is…well, your tradition multi-camera sitcom about geeks and hot girls and blah. It’s depressing to see it getting the nod over more interesting single-camera fare, but the reality is that CBS is looking for its next King of Queens or Everybody Loves Raymond (Ratings wise), and they expect to find it here. However, this is a comedy about young people (Kaley Cuoco, 8 Simple Rules, stars), not about old people. This is a young person’s sitcom being expected to play the role of a middle aged one, and the result is likely to be another The Class: high expectations and decent results behind How I Met Your Mother

– The Amazing Race is officially off the fall schedule, as it will be held over until the new year and only air a single season this year. This is unsurprising, but troubling; I worry that if ratings are low for this one season they’ll pull the plug. I think that the show has plenty of gas left, but a lot of miles on the car. They can keep driving, they just need to slow down a little and everything will be okay. It’s like Speed. (Note: Everything can be like Speed. True Story). It will be indirectly replaced by a new reality show, Kid Nation, a new Lord of the Flies-esque story of kids taking over a ghost town revealed today (Variety). It will be airing on Wednesdays at 8pm

– The New Adventures of Old Christine, the 5th Wheel on the Monday comedy block, will be returning midseason.

– Shark and Without a Trace have switched spots, with the latter moving back to its old post-CSI slot and Shark spending some time on Sunday Nights against Brothers & Sisters.

It’s official: Jericho and Close to Home are no longer on the air. This was pretty well confirmed on Tuesday, but they’re definitely gone. Also gone is “The Class”…but no one notices.

For the full Fall Schedule, continue on.