Category Archives: Dancing with the Stars

Turning Over the Keys: Musical Guests in Reality Competition Programming

Turning Over the Keys: Musical Guests in Reality Competition Programming

LeBron James’ decision to join the Miami Heat in the fall isn’t half as interesting as his choice (nay, demand) to announce this decision on live television after twenty-eight minutes of hilariously awful build-up in which television sports journalism lost a great deal of credibility. Frankly put, ESPN had no idea how to string together a show around such a crass act of self-promotion, which to their credit isn’t a particularly easy task: this was an hour-long special built around a ten second announcement, taking what could have been some interesting pre-decision and post-decision analysis and blanketing it with hyperbole about how this will forever change the game of basketball. This wasn’t ESPN covering LeBron James (which has become nauseous in and of itself), but ESPN turning itself over to LeBron James, which at the very least will have media scholars talking for a long time (or, about as long as it took Jim Gray to actually ask LeBron the question of the night).

And in what is the most shameless segue you’re likely to see all week, this same problem of “turning one’s self over” plagues reality competition programming (oh yes, I went there). For shows like American Idol, Dancing with the Stars, and So You Think You Can Dance, it’s necessary for time purposes to turn over part of their results shows to a musical guest or some other type of performer who kills some time, promotes their record/show, and moves on with their life. These performances can occasionally be quite interesting, but the fact remains that there’s a tension between the narrative unfolding (the elimination of a contestant, in most instances) and the musical performance, and watching tonight’s So You Think You Can Dance (which, in my defence, I watched immediately after tuning out from “The Decision” at the half-hour mark) a few thoughts came to mind about how shows work to keep these musical performances from seeming disconnected from the series itself.

END_OF_DOCUMENT_TOKEN_TO_BE_REPLACED

Filed under American Idol, Dancing with the Stars, So You Think You Can Dance

There are many contestants officially lined up to join the impressive lineup of stars who previously donned the fancy costumes and took part in Dancing with the Stars, ABC’s hit reality series. While the entire list of contestans can be found over at Zap2it, I want to point out the people who are pretty well guaranteed to perform well based on past expectations.

Mel B of The Spice Girls – The Spice Girls tour hype is growing, and her fame is perhaps the biggest amongst the female viewers the show craves. She’ll be a voting force, and by all logic should be able to dance. I know she’s gained weight, but she’s likely already been in training for the reunion tour anyways. She’s a contender. Plus, her partner is fan favourite Maksim.

Jane Seymour (Dr. Quinn, Medicine Woman) – Les Moonves at CBS says that he still receives mail telling him to bring back Dr. Quinn, so I think that Jane Seymour might be a strong force with some of the older viewers that the show also brings in despite its flashy nature.

Cameron Mathison (All My Children) – Didn’t they learn their lesson in Season One when Kelly Monaco beat John O’Hurley and a riot ensused? Soap fans are a devoted, devoted bunch: just imagining his voting bloc considering it consists of young female supporters, and I think he’ll be paraded into the Semi-Finals at the very least.

Dancing with the Stars premieres its fourth season (Has it been that many? Yikes.) on September 24th with the first of three shows that week.

This fall, all of your favourite shows will be returning, and some new blood will join the pack. Which nights should you be scheduling off? Here’s the full calendar list of premiere dates for the Big 5 Networks.

Are You Smarter Than a 5th Grader [FOX]

America’s Next Top Model [The CW]

Back To You [FOX]

King of the Hill [FOX]

How I Met Your Mother [CBS]

Dancing with the Stars [ABC]

Two and a Half Men [CBS]

Dancing with the Stars (Results) [ABC]

Deal or No Deal [NBC]

My Name is Earl [NBC]

Without a Trace [CBS]

Deal of No Deal [NBC]

Everybody Hates Chris [The CW]

Aliens in America [The CW]

The Game [The CW]

This list is long. This list is extensive. And I really want to know what this list means. Nielsen (Via The Hollywood Reporter) has released their data for every single TV show that aired in America this past season. It tells us where our favourite shows ranked, where much maligned shows ranked, and how scripted drama did against reality programming.And, it raises a lot of questions about this data that I think Nielsen might not want to answer.

For instance, does this list include repeats in its viewers averages? Because that’s the only way CSI (#4) should be beating Grey’s Anatomy (#6) in total viewers by my calculations. If so, this gives a distinct advantage to shows without repeats (Reality Shows, Lost, Heroes, etc.) or those shows which repeat extremely well (House, CSIs, etc.)

The major thing to watch for in the list is the difference between 18-49 numbers and viewership rankings. It rises many shows into positions of being picked up, even with lacklustre performances in viewers. Some show, like 30 Rock, are in the doldrums in terms of total viewers but shoot up into the Top 75 with adults 18-49, which got it renewed for a second season.

After a few formatting errors, I’ve realized that getting it to highlight canceled shows would drive me crazy, so just refer to your memory. And, either way, some will seem a bit strange. However, remember that these are averages, and don’t reflect ratings dropoff in their later episodes.

This is the case for Jericho, which clearly performed better than many canceled shows. However, CBS did cancel the better rated Close to Home airing on Fridays, so it’s not as if Jericho was the only victim of CBS’ extremely highly place high bar. It might as well be a pole vault at this point.

With the 2006/2007 season over, the industry trades are going right for ratings as their barometer of success. Outside of this post, I’m unlikely to do so as I go into my own year in review season. For now, check out the ratings for all of the dirt, and stay tuned for less quantitative analysis at Cultural Learnings. 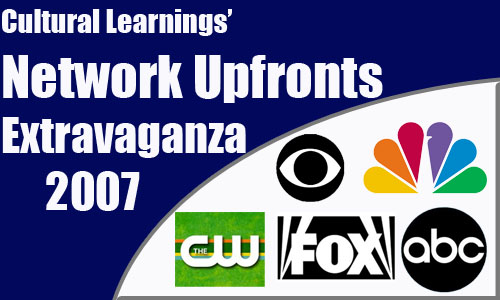 In a final word on the 2007/2008 Upfronts, I figure it’s time we returned to the schedule as a whole. Because, let’s face it, some of us watch a lot of TV. And, sometimes, that TV all falls within the exact same timeslot. As more and more shows emerge as fan favourites, more and more conflicts take place. This year’s Fall Schedule has created many of these conflicts, and some of them are sure to be key ratings battlegrounds in the year to come. Which five, however, will prove the most interesting? And, as a result, which ones will be a nightmare for non-TiVo owners across North America? Well, there’s only one way to find out.

END_OF_DOCUMENT_TOKEN_TO_BE_REPLACED 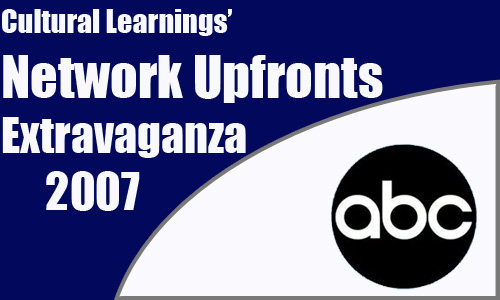 Well, ABC’s schedule is official, and there’s not much in the way of changes for the network. In fact, to be honest, the schedule is downright boring.

– Private Practice, the Grey’s Anatomy Spinoff, will be slotting in at 9pm on Wednesdays, the spot currently occupied by underperforming comedies. It will be sandwiched by two new shows: Bryan Fuller’s Pushing Daisies and Greg Berlanti’s Dirty Sexy Money. This means three new shows in a single night, which is a departure from the stability found in Lost (Which is now officially held back until February).

– Thursday’s only change is that Big Shots, a male-themed CEO drama, is inheriting the post-Grey’s spot. Why, exactly, this show has the spot over the female-themed Cashmere Mafia (Held until midseason) I don’t really know. I guess because Dylan McDermott and Michael Vartan bring sex appeal? Seems to be the only logic I can think of.

– Dancing with the Stars goes to an hour and a half full time on Mondays as Sam I Am, the Christina Applegate amnesia comedy, fills in between the reality show and The Bachelor at 10. The network’s other two comedies, Cavemen and Carpoolers, fit in at 8pm on Tuesday (Where no other comedies are, good choice), but then lead into an hour-long Dancing with the Stars results show. ABC, the show doesn’t deserve that much of your schedule, cut it to a half hour and slot in another comedy.

– The other new show, Women’s Murder Club, leads out of Men in Trees on Fridays as the latter moves to the opening slot at 8pm. It’s a tough one, against Ghost Whisperer, and we’ll see what momentum the show has after a shortened first season.

– Meanwhile, Notes from the Underbelly and October Road will be headed for midseason.

For the full schedule (It’s really this boring, I swear!), continue on.

END_OF_DOCUMENT_TOKEN_TO_BE_REPLACED

ABC is in a unique situation this year when it comes to pilots. On one hand, the network has seen some success this year and in past years, and the network has remained a solid demographics performers even with dips in viewership for its flagship shows like Lost or Desperate Housewives. However, outside of shows like Grey’s Anatomy the network actually saw a series of failures over the span of the year with both dramas and comedies. Judging from its pilot order, ABC is going with what I’d like to call a shotgun approach, something which is both good and bad for the network’s future. Either way, next season will be a test for the ABC brand: is there a cohesive image which can unite wildly different shows together under one banner?

END_OF_DOCUMENT_TOKEN_TO_BE_REPLACED

Cultural Learnings
Create a free website or blog at WordPress.com.