First today, an extensive thank you to the good people at WordPress support for dealing with some technical difficulties in fantastic fashion. I posted last evening’s Tuesday Night TV Society, and then I kind of disappeared from the site. In fact, I was no longer an administrator, and had basically lost control of the blog. As it was late and I was heading to bed (I really shouldn’t have been up blogging in the first place), I sent off a quick message to support and somewhat expected to be dealing with it throughout the day today.

Alas, this was not the case; I had an email from Mark when I woke up this morning, and logged on to find that I once again had control of the site. This basically means that the blog was down for an entire five hours or so. Mark was extremely apologetic, but honestly: where else would tech support on a blog host going to get things done in five hours (And what is technically the middle of the night out here on the East Coast)? Many thanks to Mark and everyone at WordPress for creating such a fantastic environment. I tip my hat to you.

It’s Disney’s big hope for the mid-summer months, and it’s Pixar’s first film completed under complete Disney/Pixar partnership. Ratatouille began as a project under Jan Pinvaka, director of the Oscar-winning short Geri’s Game, but was radically revamped starting early last year when Brad Bird ended his vacation early to take over the project. The result was a complete story overhaul and likely a completely different film. That film, it seems, is coming along quite nicely. For those of you who watched American Idol last night (In both Canada and the US, since I also saw this), you saw an extended commercial for the film which taught you how to say its title, and sent you to Disney.com in order to watch a 9-Minute preview of the film.

This is an interesting strategy, considering that it is basically advertising their advertising campaign. However, it’s probably the right way to go in terms of getting the word out about this film. It is lacking a gimmick, an immediate appeal, outside of its Pixar quality. It is the first Pixar film since The Incredibles to really feature human characters and it lacks that film’s built-in superhero audience. Ratatouille has a confusing title, a rat as its lead character, Paris as its setting, and in many ways it’s an unmarketable film…but don’t tell that to the 9-Minute clip on Disney’s website.

For me, it’s everything Cars wasn’t. Cars was really very lifeless, if I had to lodge a single complaint in its direction. The landscapes were luscious, but the cars just didn’t convey emotion except within its supporting characters (Mater and Guido were the only ones who really stuck with me). Its action scenes were beautiful and impressive, but didn’t have the frenetic pace and energy we saw in The Incredibles…but it’s all here. There is emotion that is mature, understandable, touching. There is action that carries the story forward and seems exciting, meaningful, and beautifully animated. I now can’t help but be excited for this film’s release, much more so than any of the multitude of sequels which surround it.

Ratatouille opens on June 29th. I can now spell it without checking it; with any luck, millions more will be able to do the same soon.

The Fate of Scrubs 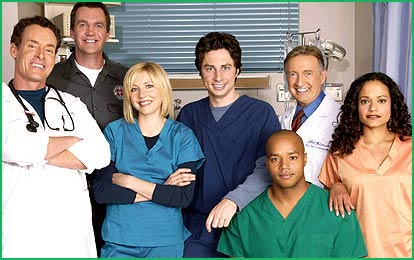 There’s usually a few hits a day on my post regarding the need for NBC to cancel Scrubs, and here’s a bit of an update. According to Variety, NBC aired commercials on Monday promoting the “final episodes” of Scrubs airing on Thursdays. Considering the show’s budget, and the multi-million dollar deal signed by Zach Braff, NBC really isn’t in any position to keep a show that, after losing its post-Office time slot to 30 Rock, was defeated by the Freshman drama in key demos and total viewers. On a basic level, Scrubs is not going to be on NBC in the fall (especially for the reason that we’ll discuss Re: The Office on Thursday).

However, considering that ABC signed Braff’s contract (They own, produce and distribute the show), all signs point to ABC picking it up. They’ve been looking for a comedy hit for ages, and with According to Jim and George Lopez on their last legs and with three failed comedies (Knights of Prosperity, In Case of Emergency, Notes from the Underbelly) this season, a known success would be key. Variety notes that it could still be too expensive, but ABC is in such a bad comedy state that they’ll spend the money just to be able to air the show’s final season.

So, fans of the show should be holding their breath for seeing another season of the show, but don’t bet on the peacock.

Watch today for initial opening-day results from its European tallies, but early word from Asia is that Spider-Man 3 will continue the franchise’s overseas success at the very least. It set records in Japan, Hong Kong and China, and is likely to do similar business across Europe. When it opens on Friday, it will be the widest opening ever…which basically means that its success is guaranteed. It’s funny, really: I can’t really get excited about this film, and yet it never had a chance to fail. It’s got nothing opening against it, this past weekend as an abysmal one for the domestic box office so there’s no holdover competition in the least, and there’s nothing opening on May 11th to challenge it. Basically, until Shrek 3, Spider-Man 3 can destroy the box office with no real competition. The really interesting opening will probably be Shrek 3, as I think it’s the least necessary sequel and stuck in the middle of Spidey and Sparrow (Pirates 3)…but who am I kidding? They’ll all make hundreds of millions of dollars.