When Awkward. closed the first half of the third season earlier this year, it was with the promise of ten more episodes to debut this fall. Around the same time, however, we learned those ten episodes would be the final ones for creator Lauren Iungerich, who left the show to explore other opportunities.

I’ve been covering the show for The A.V. Club since mid-way through its first season, and Iungerich has been kind enough to drop into the comments and engage with viewers on occasion (and has already weighed in on some of the comments on my review of “Surprise!”, tonight’s premiere).

Having spoken to Lauren about the show ahead of its second season here at Cultural Learnings, I got in touch with her this week to get some perspective on “Surprise!” and the final ten episodes as we march toward her “series finale.” Schedules permitting, my goal is to have a few of these conversations throughout the season to get further perspective, likely with a more retrospective interview to follow later in the year.

In the meantime, some Q&A on “Surprise!”, Jenna as—a sort of—anti-hero, and Season 3’s arc as a whole:

Jenna’s arc in Season 3 can be pretty cleanly mapped onto the two half-seasons: the first ten episodes explored her struggles to reconcile her complex relationship with Matty with her attraction to Collin, and now the back half can explore the consequences of her decision to explore said attraction. Two questions tied to this: First, what drew you to what Mr. Hart calls an “anti-hero” story for this character?

Lauren Iungerich: I wasn’t trying to tell an “Anti-hero” story per se, not in the traditional sense. The idea for this season’s arc was to take Jenna—the once underdog girl who became the “every girl” (albeit an every girl with multiple suitors)—and make her an underdog once again…but this time of her own volition. She is going to create her own drama, conflict and issues which bring the show and Jenna full circle and yet with an entirely new perspective about who she wants to be.  This is the season where Jenna is defining herself for herself.  But in order to do that we have to see Jenna go on a real teenage journey of selfishness. She has to make bad decisions to gain perspective, and this makes Jenna unlikeable at times. Making Jenna unlikeable was a bold choice that I made for the series and I stand by it because it makes her incredibly real, especially on a teen comedy. And when you get to the end of season, I promise you: it will all be worth it.

Second, did the arc predate the choice from MTV to do a split 20-episode season? If so, how did the additional episode order affect how you told and/or structured the story?

LI: They ordered 20 from the start. I knew they might split them so I arced them in episodes of 10 (which also makes the storytelling cleaner and clearer), and as I was writing it became clear there would be a break between each 10 (wasn’t sure how long it would be—I was always the last to know). But the storytelling was laid out for all 20 from the beginning. The 20 episodes had a long form beginning, middle, and end, and then each 10 also had a beginning, middle and end within them. So it was designed and planned from the get-go.

As you may know, my biggest issue with the first half of the season was Collin, who always registered as a contrivance—or, more generously, a catalyst—rather than a real character to me. He’s a more concrete presence in the premiere, now that he’s no longer just an option for Jenna to idealize, but I guess I’m wondering if this is a case where I’m missing a character that’s there or whether his fairly thin, smolder-heavy persona is intended to reflect Jenna’s idealized image of him.

LI: You hit it exactly: the way he’s written is EXACTLY why you hate him.  We don’t know him—he seems thin, because he is thin. That was the point. She’s trading in someone she knows for the “idea'” of someone she doesn’t. It’s real: Girls do this—and so do boys—and that’s the beauty. I was never trying to make a point of making her have two contenders like Jake and Matty, who were both viable love interests in the first two seasons. Instead, I was giving her a new kinda fella, someone that we will question. Is he worth it?

Some shows would have had Jenna hold onto her secret for multiple episodes. What led you to choose to make characters—first Tamara, then everyone—aware of her relationship with Collin so quickly at the end of “Surprise!”? Was there ever a point where you considered holding onto the secret for longer?

LI: No. To me the secret felt like it would get old, especially given that we danced with her flirtation with Collin for so long. And that flirtation was really just a manifestation of her working out a subconscious unrest about the fact that perhaps the hunt—for Matty—was better than the kill. Sometimes you get what you want and not what you need. That’s what she was coming to realize in the first 10. Now the truth is out. Is she going to get Matty back? Does she want him back? Does he want her back? And if not, does she want Collin? Or was Collin just an exercise in boredom? All shall be revealed but there is a reason why I immediately revealed the affair, and it relates to her journey back to being an underdog.

While the foregrounding of Jenna’s arc makes sense, it means that “Surprise!” doesn’t get to set up arcs for other characters (Tamara and Jake, Sadie, etc.) outside of Ming and Fred. Heading into this final set of ten episodes, what were your goals in terms of balancing the center and the periphery? Were those goals different in a season with 20 episodes rather than 13?

LI: There are other arcs at play that have not been laid into episode 311 or 312 – they evolve starting in 313. But Ming really has the biggest arc second to Jenna’s. And I was also trying to make Matty the new Jenna in the sense that he becomes the romantic underdog for a while. I really wanted to flip the dynamic between the two of them this season—in a weird way he’s growing and she’s seemingly regressing, even though she is actually growing as a person.  When you think of it, at the end of Season 1 Matty ends up the loser because he didn’t play his cards right. And he didn’t play them right because he was in the process of growth. The same thing is sort of happening to Jenna now, but in a more public and potentially more harmful way. More relationships are in the balance and her relationship with Matty is much deeper at this point, so her mistakes have far greater consequences emotionally for Matty…and ultimately for her. 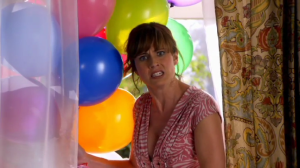 I always enjoy a good montage, so Lacey’s collection of ruined surprise parties was a particularly fun bit of levity in the premiere. I was curious how this evolved from script to screen: were there a lot of options left on the cutting room floor, or did you land on “Climbing in the window with balloons” and realize you had the winner?

That was edited as it was written! That was how I wrote it. Thank you for making me feel so clever! (She’s actually coming through the sliding glass door, but the camera is angled low as it’s supposed to be little Jenna’s POV.)