In the second part of a two-part interview with Awkward. creator Lauren Iungerich, we consider the choices she made once she realized she was writing her final episode of the series (which I reviewed at The A.V. Club here), as well as some of the plans she had should she have remained involved with the show in its fourth season. You can find part one of the interview, where Iungerich reflects on her decision to leave the series, here.

[Spoilers for “Who I Want To Be,” the third season finale of MTV’s Awkward., throughout this interview.]

END_OF_DOCUMENT_TOKEN_TO_BE_REPLACED 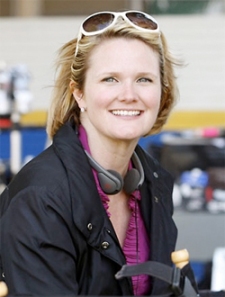 When Awkward. closed the first half of the third season earlier this year, it was with the promise of ten more episodes to debut this fall. Around the same time, however, we learned those ten episodes would be the final ones for creator Lauren Iungerich, who left the show to explore other opportunities.

I’ve been covering the show for The A.V. Club since mid-way through its first season, and Iungerich has been kind enough to drop into the comments and engage with viewers on occasion (and has already weighed in on some of the comments on my review of “Surprise!”, tonight’s premiere).

Having spoken to Lauren about the show ahead of its second season here at Cultural Learnings, I got in touch with her this week to get some perspective on “Surprise!” and the final ten episodes as we march toward her “series finale.” Schedules permitting, my goal is to have a few of these conversations throughout the season to get further perspective, likely with a more retrospective interview to follow later in the year.

In the meantime, some Q&A on “Surprise!”, Jenna as—a sort of—anti-hero, and Season 3’s arc as a whole:

END_OF_DOCUMENT_TOKEN_TO_BE_REPLACED

Who Won Survivor Gabon, and Did They Deserve It?

I may have written almost nothing about it this season, but Survivor: Gabon has been an intriguing and entertaining season of Survivor. It hasn’t been that interesting as a far as the game structure itself, which is the same as ever, but the casting people have managed to put together a variety of people who are either desperate to control the game but lacking the wits to do so, or wonderfully flighty in such a way that dramatically impacts the game despite a distinct lack of forethought. Some tribes were dominant, some contestants were emotionally unhinged, and there was enough of a story to keep me as entertained as we’ve seen in the past.

Heading into the finale, the cards were dealt: Sugar the flip-flopping pin-up girl, Bob the physics professor who has dominated the latter part of this game, Matty the personal trainer who has performed well, Ken the video gamer who thinks he owns this game, and Susie who…has done absolutely nothing of note.

Considering this, we ask ourselves the big question: did the winner from the three-person final tribal council reflect the game’s broader developments, or was it another instance where the jury got it wrong?