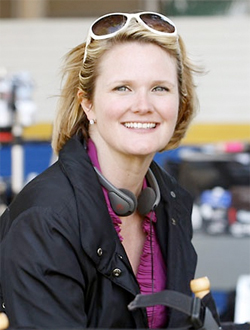 When Awkward.—which I cover for The A.V. Club, and which returns on Thursday at 10:30/9:30c on MTV—made its debut on MTV last year, creator Lauren Iungerich was transformed from a television writer into a television showrunner. While recent events have led many publications to shine a light on the rise of female showrunners and/or creators within television, Iungerich has unfairly flown under the radar in those conversations. Working outside of the network system with a cable channel still searching for its identity in original scripted programming, Iungerich was given something that some other creators aren’t given: the opportunity, and the challenge, of playing the role of showrunner for her first series.

I had a chance to chat with Iungerich last week, and I’ll be sharing that interview in two parts. The first part, found below, details her experience as a first-time showrunner, her approach to Awkward.’s development, and her plans for its evolution—accordingly, it may be of interest even to those who haven’t watched the MTV series. Meanwhile, part two of the conversation—which is now up—will focus more specifically on the series itself as it heads into its second season, with topics including the show’s central love triangle and its Palos Verdes setting in California.

Given that this was your first time as a “showrunner,” how did it compare to your expectations?

Lauren Iungerich: It was way harder. [Laughs] What’s hard about being a showrunner—to break it down, there are two things that are really tough. First, you can’t just be the artist: you also have to be the producer, so it’s like art and commerce get mixed together so you have to be fiscally responsible; you have to really work with your network to make sure you can really produce the show and yet at the same time maintain the artistic integrity of your vision. And those are two things that sometimes don’t work in concert with each other.

END_OF_DOCUMENT_TOKEN_TO_BE_REPLACED

The timing of the next few episodes of Game of Thrones couldn’t be worse on a personal level – it’s a busy time of year for me, what with the end of the semester, and it’s coming just as the series is entering some more distinctly complex episodes. While I had hoped to get these reviews done in advance, the truth is that things just became busy too quickly, meaning that I won’t have time to dive as far into “Cripples, Bastards, and Broken Things” as I might like.

However, because of this, I do want to focus in on one part of the episode in particular, comparing and contrasting it with the episode surrounding it. Jon Snow’s time at the Wall is maybe my favorite central location of those introduced early in the series, and it is in large part due to the work done in this episode. Part of this has to do with my affection for the new arrival introduced here, but it also has to do with some key decisions which give the storyline a sense of camaraderie and humor which is more or less absent from the rest of the storyline.

It’s also a part of the story which disappears for two weeks, which means focusing my analysis on it makes even more sense given that I’ll have plenty of time to discuss Ned’s investigation into Jon Arryn’s death, the viciousness of the tournament, and the slippery nature of the metaphorical dragon in the weeks ahead.

END_OF_DOCUMENT_TOKEN_TO_BE_REPLACED

Review: NBC’s The Event an Exercise in Zeitgeist-Chasing Self-Indulgence

What is the function of mystery?

You might feel that this is a particularly silly question, but I think that television producers are beginning to misinterpret just what makes mysteries a key component of television drama. Yes, the most basic definition of mystery is uncertainty, so there is a certain value to keeping your audience guessing throughout your narrative. However, mystery is about more than guesswork and confusion; it is about suspenseful situations, and about the way each individual character responds to their uncertainty. In other words, a good mystery isn’t an elaborate conspiracy unfolding in fractured narratives designed to obscure the truth; rather, a good mystery is one which the viewer experiences as opposed to one which has been explicitly created for their consumption, one where the characters and the audience share the same feelings of suspense or uncertainty as the series continues.

This is all a fancy way of saying that NBC’s The Event – which debuts at 9/8c on Monday, September 20th – is a show which tries so hard to be mysterious that it loses track of basic principles of storytelling: with a chronology designed to confuse, and with characterization that ranges from vague to non-existent, there is nothing for the viewer to latch onto but the elephant-sized mystery in the room. And yet by organizing the pilot as a series of neon signs with flashing arrows pointing towards the mystery, the manipulations necessary to create said mystery become readily apparent, and render The Event an exercise of zeitgeist-chasing self-indulgence.

END_OF_DOCUMENT_TOKEN_TO_BE_REPLACED

Filed under The Event