Parks and Recreation – “The Set Up”

After just writing about Community’s handling of Jack Black’s guest spot by calling attention to how distracting it could be to have a recognizable guest star show up on your show, it’s interesting to turn our gaze to Parks and Recreation, where two “big name” guest stars (at least in my circles) debuted. While Community drew our attention to Black’s disruption in order to make a large meta-joke, Parks and Recreation does something similar but different in creating an extra layer of comedy for those who know that Will Arnett and Amy Poehler are married in real life.

It was a good example of how casting someone recognizable can help a storyline rather than hurt it, as Arnett was simply a fun casting choice: he’s funny, and the marriage added an extra layer to the scene, but it wasn’t dependent on a guest star, just as the show didn’t need to have Justin Theroux playing the aptly named Justin, a friend of Ann’s who Leslie takes a liking to. Both characters, despite being cast with recognizable faces (for me, at least), played roles which weren’t played as the “point” of the episode, but their performances gave them an added weight, which is especially helpful when Theroux might be sticking around for a while.

And so now we can look at the episode less in terms of who was in it, and more in terms of the episode built around them…okay, I’m going to talk some more about Arnett. Sue me.

END_OF_DOCUMENT_TOKEN_TO_BE_REPLACED

Filed under Parks and Recreation

After writing rather lengthy analysis of the other three NBC comedies, all of which tapped into the emotional recesses of their characters in uncomfortable or telling fashions, it’s refreshing to get to 30 Rock, which tried to do absolutely none of those things.

While it wasn’t an all-time classic, “Dealbreakers Talk Show #0001” was a prime example of what happens when you just let Liz Lemon run free. The episode follows a paper thin plot, rarely taking a story to any unexpected or surprising place, but Tina Fey is so inherently in control of this character that she is able to depict Liz’s downward spiral into a Jekyll/Hyde split persona in a way that makes you laugh so hard you forget just how pointless it all is.

It becomes a series of cleverly executed sight gags at a certain point in the episode, demonstrating that even the simplest of stories (even when that story surrounds an element of the show which could be complicated) can elicit laughs within the universe Fey has created here.

END_OF_DOCUMENT_TOKEN_TO_BE_REPLACED

“Do-Over” is not the best episode of 30 Rock, nor is it necessarily an entry into the show’s catalogue of fantastic ones. Rather, it is familiarity that makes this episode so memorable: it offers plenty of showcase opportunities for Tina Fey and Alec Baldwin (albeit leaning towards the former), it has a sharp storyline that offers every character a small moment, and it uses its guest star (Will & Grace’s Megan Mullally) wisely, unlike last season’s unfortunately flat appearance by Jerry Seinfeld.

While NBC is hoping that this is going to be a do-over for 30 Rock, a show that never quite captured the kind of audience the network is looking for, that’s all based on ratings: creatively speaking, the show barely needed a fresh coat of paint to return as the funniest comedy on television.

END_OF_DOCUMENT_TOKEN_TO_BE_REPLACED

Emmys on Trial: The Ageism of Guest Acting

[As part of our continued, if oft-neglected, coverage of the 60th Annual Primetime Emmy Awards next week on September 21st, Cultural Learnings brings a week of coverage designed to shed some light on the key races, the fascinating stories, and the things that are already frustrating to the point of anger even before the winners are even announced. Thus, welcome to Emmys on Trial – don’t worry, I’ll have predictions too.]

The Ageism of Guest Acting

Last night, a lot of people won Emmy Awards. Some of these people were probably not surprised: could the crew of Mad Men truly be shocked to pick up a number of Creative Emmys in categories such as Art Direction, Hairstyling, or Main Title Design? Would the special effects team behind Battlestar Galactica honestly have not prepared a speech this year (Read here for last year’s tale) considering the show’s reputation and improved work in season four? And, after “Dick in a Box” paved the way for late night comedy songs, “I’m F*cking Matt Damon” was a lock even if Silverman and Kimmel’s relationship couldn’t last until the ceremony (Damn Matt Damon).

But if there was anyone at the announcement of the winners of the Creative Arts Emmy Awards not surprised, it was Kathryn Joosten and Tim Conway. Representing two shows with multiple nominations in their respective categories, these stars of Desperate Housewives and 30 Rock respectively have two things in common: they both won Emmys that they don’t deserve, and they both are very, very old.

And yeah, I know: who’s Ageist now? Well, someone’s got to restore a little balance here.

END_OF_DOCUMENT_TOKEN_TO_BE_REPLACED

When people predict the Emmy Awards, they predict the big awards: the ones with names we recognize, the ones that we’ll see on TV, and the ones that we’ll remember when the show is over. However, there are dozens of Emmy Awards given out each year, and when the nominees are announced Emmy fantatics like me will be poring over the epic list looking not just for the usual suspects but rather some of the trends that emerge elsewhere.

And it’s really a question of trends more than individual categories – I can’t possibly predict a category like Best Direction in a Comedy Series, but I can tell you who is likely to be kicking around and what kind of shows will perform well in the category. It’s one last bit of Emmy coverage before we head into tomorrow, where I’ll have live coverage of the nominations themselves followed by the full list of nominees and full analysis of how things went down. In the meantime, let’s discuss the “Other” awards, ranging from writing to directing, guest acting to individual performance, and everything in between.

Outstanding Writing in a Drama Series

Trend: The category is usually used to represent the best in episodic television along with the year’s standout pilots. It’s considered one of the best categories, mainly because of said high quality.

Changes: Unlike last year, there’s no show that is going to dominate with a large number of episodes in the tradition of The Sopranos – only Mad Men has a chance at that.

Watch for: Lost’s “The Constant” seems like a lock unless something goes hideously wrong (Even last year, with the show snubbed, they won a nomination for “Through the Looking Glass,” while the Mad Men, Breaking Bad and Damages pilots might represent new series on the list.

Repeat Offenders: Ronald D. Moore was a surprise nominee for Battlestar Galactica last year, so he could be back. Meanwhile, since three Sopranos episodes made the cut last year, there’s room for some returns – David Simon is likely back in the race for the finale of The Wire, for example.

Outstanding Directing in a Drama Series

Changes: We don’t know if we’ll see yet another seven nomination kudos list, but if we do it means more of the same from the Academy.

Watch for: In terms of the year’s pilots, it’s a pretty safe bet you’ll see cinematic Damages and intoxicating Mad Men on this list (Alan Taylor, who directed the Mad Men pilot, won for The Sopranos last year). As far as other series go, expect Lost’s Jack Bender to pop up again.

Repeat Offenders: Battlestar Galactica could see another nomination here, but Heroes and Friday Night Lights are likely both going to miss the cut. There could be other series, however, that would be more than willing to step in and fill the gap (The Wire and Dexter, in particular).

END_OF_DOCUMENT_TOKEN_TO_BE_REPLACED 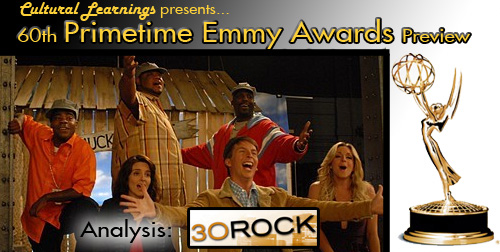 While it certainly didn’t come out of nowhere, considering that it had nominations in both lead acting categories, 30 Rock’s Emmy win last year was still a bit of a surprise. However, it was a pleasant one, and signaled and onslaught of critical praise and accolades for a series that (at that point) seemed to be on shaky ground where it matters most these days: ratings.

But with a third season guaranteed and more hardware in the closet, 30 Rock has gone from the upset victor to the perennial frontrunner for the 60th Annual Primetime Emmy Awards. And with great power comes, well, great responsibility; in this instance, responsibility to pick the right submissions to reflect the season’s quality.

My Suggestion: “Secrets and Lies”

It’s hard to pick a single episode to encapsulate an entire season: I think the show’s smartest segment has to be “Rosemary’s Baby,” for a lot of reasons I’ll discuss further below, while part of me gravitates towards “Greenzo,” featuring a fantastic David Schwimmer in the title role. However, I like “Secrets and Lies”: it has a great storyline featuring Baldwin and perennial Emmy favourite Edie Falco, a couple of great moments for Tracy Jordan, and the fantastic ending sequences as corporate republicans reveal their inner demons. Regardless of which they actually choose, however, the deal is sealed either way.

Lead Actress in a Comedy Series 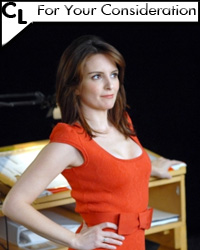 In this instance, my suggestion isn’t hostile: the last pre-strike episode may have been rushed, but Fey knocked both her initial interaction with and her late-night phone call sessions to the co-op board of her new apartment out of the park. In particular, the image of Fey on the phone while walking on her treadmill and drinking a glass of red wine while proclaiming that she bought a black apartment stuck with me for a long time. However, “Sandwich Day” had Fey doing what she does best: being neurotic and eating on camera (plus looking really attractive in the dress on the left. An argument could also be made for “Succession,” as Liz goes corporate, but something about that episode didn’t sit right for me.