ABC is the one network this year whose strategy appears to be “let’s order a ridiculous number of new shows,” which is really quite interesting in this economic climate. The network isn’t in a bad position, per se, but its been through a rough development patch where this past year brought the failure of three out of four of its major sophomore series (Private Practice being the only survivor) as well as the failure of all but one of its midseason replacements (Castle being the only one who managed to pull it together, and even then only with the support of the Dancing with the Stars lead-in). Their staple shows have remained fairly strong, with Lost, Grey’s Anatomy, Desperate Housewives and Brothers & Sisters all remaining solid performers despite industry-wide drops in ratings, but they were in need of some new blood.

Their solution, however, is going to be a rather interesting experiment, especially when we consider the way in which the network is programming those new series, and just how many of them they have working for them: ordering a mix of legal, procedural, and science fiction dramas on top of four (count ’em) four new comedies, the network is banking on people being ready to laugh and, more importantly, to embrace shows in the 10pm timeslot with NBC out of the running.

Let’s take a gander at the highlights, shall we?

END_OF_DOCUMENT_TOKEN_TO_BE_REPLACED

Emmys on Trial: The Ageism of Guest Acting

[As part of our continued, if oft-neglected, coverage of the 60th Annual Primetime Emmy Awards next week on September 21st, Cultural Learnings brings a week of coverage designed to shed some light on the key races, the fascinating stories, and the things that are already frustrating to the point of anger even before the winners are even announced. Thus, welcome to Emmys on Trial – don’t worry, I’ll have predictions too.]

The Ageism of Guest Acting

Last night, a lot of people won Emmy Awards. Some of these people were probably not surprised: could the crew of Mad Men truly be shocked to pick up a number of Creative Emmys in categories such as Art Direction, Hairstyling, or Main Title Design? Would the special effects team behind Battlestar Galactica honestly have not prepared a speech this year (Read here for last year’s tale) considering the show’s reputation and improved work in season four? And, after “Dick in a Box” paved the way for late night comedy songs, “I’m F*cking Matt Damon” was a lock even if Silverman and Kimmel’s relationship couldn’t last until the ceremony (Damn Matt Damon).

But if there was anyone at the announcement of the winners of the Creative Arts Emmy Awards not surprised, it was Kathryn Joosten and Tim Conway. Representing two shows with multiple nominations in their respective categories, these stars of Desperate Housewives and 30 Rock respectively have two things in common: they both won Emmys that they don’t deserve, and they both are very, very old.

And yeah, I know: who’s Ageist now? Well, someone’s got to restore a little balance here.

END_OF_DOCUMENT_TOKEN_TO_BE_REPLACED

Earlier this week, Tom O’Neill over at The Envelope’s Gold Derby revealed that the Academy planned, for the first time, to reveal the official Top 10 qualifiers for the Series and Acting prizes. These are the shows that will be screened in front of panels, and then used to decide 50% of the final nomination process. These lists are the cutoff point – if you don’t make the list, you cannot get nominated for an Emmy.

Now, the Academy is making their unprecedented decision a little bit more tentative; they’ve announced the Top 10 Series in both Comedy and Drama, and are going to re-assess the situation tomorrow after they see the critical and industry response to these revelations. This is fair, I guess, but let me be the first to say that as a wannabe TV critic I love this news, and think that it’s only helpful to the process. Yes, it will make a potential nomination for a show like The Wire less surprising (Where before people would have presumed that it wouldn’t even make the Top 10), but now people are actually kind of excited going into the process.

Now, Tom has asked that the list of episode submissions be kept to his blog, but the Top 10 lists are floating around. So, here’s the link to Tom’s list, and then I’ll provide the full list of shows and go into some commentary on the choices, and why releasing the acting lists is still a viable option.

The Big Surprise: The Wire, which in its fifth season finally captured a little more of voters’ attention. The show is actually HBO’s only show in the category, trouncing their more heavily promoted In Treatment.

The Big Snub: While one could argue that Big Love’s absence from the list is a surprise, the real surprise is that Heroes (nominated last year) didn’t make the Top 10. That the Academy so clearly judged the second season’s quality correctly gives me high hopes.

The Sentimental Favourite: It’s gotta be Friday Night Lights, which squeaks its way into the category with an uneven, but still quality, second season.

END_OF_DOCUMENT_TOKEN_TO_BE_REPLACED 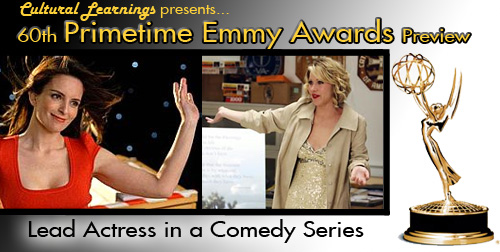 In the Emmy Awards’ smallest acting category, there’s not much in the way of wiggle room. The small numbers should mean more of a chance of grabbing a nomination for newcomers, like Pushing Daisies’ Anna Friel or Miss/Guided’s Judy Greer, but it’s also one of the most tightly contested of the major categories. This is because there’s a lot of forces at play here: you’ve got the power of the four Housewives, the heritage of Seinfeld, Everybody Loves Raymond and Married…with Children, and the credibility of awards-show favourites like Mary-Louise Parker or Tina Fey.

Combine all of this with last year’s winner America Ferrera, and you have a category where making the Top 10 isn’t enough; you need to have something special that’s going to make you overcome the logjam that could lead to the category’s five nominees. On the one hand, this shuts out a lot of good candidates who probably deserve a shot, as they won’t rank highly enough in the popular vote to have a chance.

However, the one good spinoff is that for the candidates who do have that name recognition, it’s going to be a race that is decided by who has the best tape. The seven or so candidates who have a chance of cracking that Top 5 will have to put forward their best material of the season, and the result is a race that’s going to be very close even if there’s so many “real” contenders.

END_OF_DOCUMENT_TOKEN_TO_BE_REPLACED

The Challenge of Streaming Video in Canada

With a flick of a switch, and the power of a battery company, streaming video of shows people actually want to watch (legally) comes to Canada. CTV announced today (Friday) that starting immediately episodes of three of the top-rated shows on television will be available to Canadians on CTV.ca – Lost, Grey’s Anatomy and Desperate Housewives will see their new episodes available for four weeks after their first airing, allowing those who miss out to catch up.

This is triumphant for CTV, who has oft-struggled to keep their sagging broadband audience at bay after a disappointing lack of continued support beyond certain series, as they can lay claim to the only major Canadian network offering multiple high-tier series in a legal and well-supported platform (All of BellGlobeMedia’s online presences have integrated a new online streaming system far superior to their old one).

This could also be triumphant for people in Canada who have seen “This Video is Not Available in your region” one too many times – with all of the major American streaming sites, whether CBS’ Innertube or ABC.com’s episode viewer, locked out to eyes North of the border due to CRTC regulations, this could be the Great White Hope: a light at the end of the tunnel for an emergence of a broad and all-encompassing broadband presence.

END_OF_DOCUMENT_TOKEN_TO_BE_REPLACED

The State of the Primetime Soap Opera: ‘Desperate’, ‘Sexy’ and ‘Sisters’

The primetime soap opera was heralded as the new and resurgent medium when Desperate Housewives arrived and brought steamy, sudsy television back to the forefront of popular culture. Now, three years later, ABC remains at the forefront of the movement but is not alone: CBS is introducing Cane and Swingtown, attempting to break through on what only ABC has managed to pull off in recent years.

Perhaps attempting to confirm themselves as the destination for primetime soaps without procedural elements or workplace settings, ABC is introducing ‘Dirty Sexy Money’ to the table while ‘Desperate Housewives’ bounces back from a weak couple of seasons and ‘Brothers & Sisters’ takes advantage of late-season momentum.

I am admittedly a sucker for these shows: I might view them with a more critical eye, but I have a penchant for some good family drama. But is it good family drama? And how are the show stacking up this season? Let’s take a gander.

I will admit that I stopped watching Desperate Housewives last year, fairly early even. I simply didn’t find the second season interesting enough to justify sticking around during the rather slow start to its third. What has me watching the premiere, then? Mainly the arrival of new characters, new mysteries, and Nathan Fillion. So sue me, I became a Browncoat with Firefly over the summer.

My verdict: Dana Delaney has finally added some spice to the proceedings, the various women of Wysteria Lane are at their best when keeping secrets, and the mystery feels like just the right balance of intrigue and actually interesting material, as opposed to last year’s. It is a creepy dream for a brain-washed girl whose parents are hiding things in a locked room that hides not a chained up male but a hidden past.

It centers on not some secret murder plot or basement dungeon, but a mysterious new neighbour with a past and a future on Wisteria Lane. The drama amongst characters it as much of a retread as before, but it feels fresher as long as some level of change is being promised. And I feel like a new neighbour, and new neighbours to come, might be enough to bring the show back on track.

At the end of last season’s finale, the Walker family cleansed themselves with a dip in the pool to signal a new beginning. However, this was really incredibly misleading, as this year’s season premiere showed: in reality, they’re still just as messed up as they were before. Kitty’s neutoric, Kevin’s narcissistic, Sarah’s marriage is a wreck, and the rest of the family are in a state of upheaval.